You are here: Products The Train: Book One: Romokai Series by RL KEYS 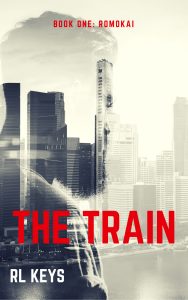 The Train: Book One: Romokai Series by RL KEYS

When you are invited to Romokai, you are taken from your old life, symbolically and physically. Your clothing, technology, and means of communication are removed before you go on the adventure. You are cut away from who you were. Once you are Cut, we begin to rebuild you, bit by bit.

R.L. Keys tells the story of the secret society known as Romokai. As an avid adventurer, committed to an active, romantic life, Keys fell in love with the story of Anya Chase, the woman who went across country on a train to change her life.

The story of the secret society that sends women on a cross country train to find romance.

“Open your mouth.”
She complied.
He put something on her tongue, a thin strip of meat that almost melted in her mouth. She muttered something incomprehensible.
He said, “What would a wave be if you didn’t know what to call it? If you didn’t have a name for it, what would it be? What would a cloud be if we didn’t call it a cloud? By giving it a name, we take something away from it. What would these things be, in their essence, their truest forms? What is a wave without its name? It’s something much bigger, an earth poem, an ocean song, a dancer on water, a destroyer, and a creator. What was a wave before we came along and put a name on it?”
Anya thought about the waves she saw on her vacation in San Diego, curly blue magic carpets that carried surfers to and fro. She thought of the sounds she played of waves on her phone to help her sleep at night.
“I think I see what you mean,” Anya said.
“What I just put in your mouth is jamón ibérico, made in Spain from the black Iberian pig. They’re fed olives and acorns. This variety of ham cures for almost four years. It sells for about a hundred dollars a pound,” he said, dropping another slice of ham into her mouth. “Those are all the names and descriptors we have for it, but it doesn’t explain what it does to you, how it affects your body. That experience is yours alone. If you fall in love with it, it won’t be because you know what the pigs ate, but because you love the way it makes you feel.”
Anya heard the fire crackle on the table as the ham dissolved on her tongue. Anya imagined a tiny girl, a hibachi or a small stove, like the ones used at Japanese restaurants. She tried to open her eyes, finding only an orange glow of silk.
“Open your mouth,” he said, in his Kiwi accent. “Now, when I put these in your mouth, I want you to tell me how they make you feel. I don’t want to know what you think you are eating; I already know what you’re eating. You understand?”
Anya nodded.
He placed a skewer into her mouth. “Bite down lightly.” He removed it gently.
Anya thought she tasted melon and basil, and maybe a nut of some sort. But how did it make her feel?
He asked, “How does it make you feel?”
“I don’t know.”
“That answer doesn’t work. You’re blindfolded for a reason. I want you to get in touch with your senses without the distraction of your eyesight.”
Anya scanned her body for sensation. “I guess it makes me feel clean. The sweetness of the melon reminds me of sitting in the sun with my mother, in the Bahamas.”
“Good on ya.” He said, “Lift your right hand. Take the cup and take a small sip.”
The cup was warm in her hand as she lifted it to her mouth. She stopped to smell it before drinking. Smelled like Saturday. Anya tasted it and struggled to separate taste from her memory. “I’m in the garden with friends. I feel warm, safe. Bees are buzzing and landing on fresh tomatoes.”
“Yes, I like that one.” He took the cup and sat on the table. “Open your mouth.”
Anya opened her mouth and inside slid a bright-tasting fish, maybe shrimp ceviche. “It takes me back to walking on the docks in Nassau, in the Bahamas. It makes me feel like anything is possible.”
“Yes.”
Anya heard him stand and move things around. A moment later, she heard meat sizzle on the fire.
“Open.”
He inserted a small spoon into her mouth. She tasted a decadent burst of peas with a hint of bacon. As he pulled out the spoon, a drop of the soup fell on her chin. He took his finger and put it firmly on her chin, removing the droplet. Softly, he lined her lips with the tip of his finger, teasing her mouth open, driving her through a longing deep breath punctuated by lustful finger touches, and divine tastes.
“That one … makes me feel aware, like I can see without my eyes.”
“What do you see?”
Anya said, “I see a man with a beard in a restaurant for a secret society feeding me the greatest meal of my life. I see myself, opening up, urgent and helpless, but exploring new life-lines.”
“Exceptional.”
Anya heard the fire change shape as the man tended the flame. She recognized the sound of meat being cut. Her mouth watered.
“Open your mouth.” He inserted something and left it on her tongue, holding it in place. “Bite down.” He scraped the artichoke leaf against her front teeth, leaving a dab of butter and lemon on her palate.
“That one makes me feel …”
“Hush. Open your mouth again.”
She complied as he inserted a piece of beef in her mouth that let her know that there were real masters alive in the world. Anya wanted to master something, but she couldn’t settle on a focus. But here she was, being fed by someone who had reached the pinnacle of what he wanted to do with his life.
“That’s a masterpiece.”
“I know.”

Be the first to review “The Train: Book One: Romokai Series by RL KEYS” Cancel reply