You are here: Products THE TIES THAT BIND by Marta Tandori 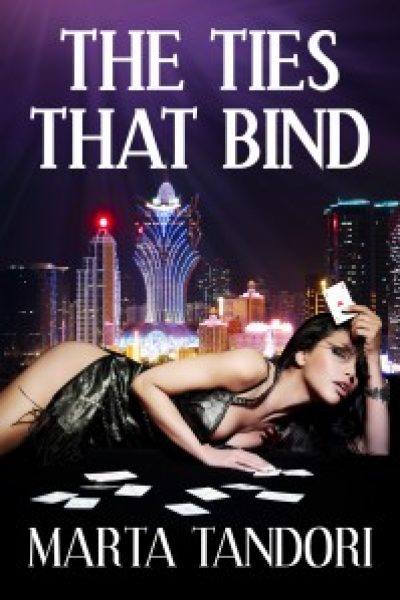 THE TIES THAT BIND by Marta Tandori

In this standalone prequel to TOO LITTLE, TOO LATE…Four years ago, Brooke Connelly made the biggest mistake of her life when she betrayed her mobster boyfriend by tipping off the intended victim of his next hit. Thanks to her timely intervention, Chaz Longo was able to flee Las Vegas while Brooke opted to stay behind; a decision that nearly cost Brooke her life after she was beaten and left for dead by her boyfriend in retaliation for her betrayal. In desperation, Brooke turned to one of the most powerful men in Las Vegas for protection – unaware that her arrangement with Clint Staebler was non-negotiable and permanent.

Brooke has since relocated to L.A., where she’s the general manager of a popular restaurant and nightclub, both owned by Clint Staebler. With her recent engagement to a prominent Beverly Hills doctor and the impending arrival of their baby through a surrogate, Brooke is determined to cut all ties to her past but the cards seem to be stacked against her when her fiancé is enlisted to treat Chaz Longo, barely alive after foolishly returning to Vegas and crossing paths with Brooke’s former boyfriend. Brooke’s life is further complicated when her fiancé finds out about her past relationship with Clint Staebler and demands to know where her loyalties lie, especially after Chaz is later gunned down in Clint’s nightclub and Brooke is strangely reluctant to quit her job. Caught between a murderer and a man who refuses to let her go at all costs, Brooke plays her one trump card in the hopes that it will be powerful enough to sever her ties to her past, once and for all.

By the time Marta Tandori reached fifth grade, she was an avid reader and writer with a stack of short stories collecting dust in a box under her bed but it wasn’t until she began studying acting in her early twenties at the prestigious American Academy of Dramatic Arts in New York that Marta realized acting wasn’t really her passion – writing fiction was. What followed was years of writing workshops as well as correspondence courses in writing for children through the Institute of Children’s Literature in Connecticut. She credits the award winning author, Troon Harrison, as the instructor who helped her find her literary voice. Marta’s first work of juvenile fiction, BEING SAM, NO MATTER WHAT was published in 2005, followed by EVERY WHICH WAY BUT KUKU! in 2006. With her more recent endeavors, Marta has shifted her writing focus to “women’s suspense”, a genre she fondly describes as having “strong female protagonists with closets full of nasty skeletons and the odd murder or two to complicate their already complicated lives”. To learn more about Marta, visit her website at http://martatandori.com.

I think that anyone who ends up working in Vegas at some point in their lives as an interesting story to tell. Brooke’s story had been wanting to be told for a long time. I just wanted to put a bit of an unusual spin on it which I had hoped my readers would appreciate.