You are here: Products The Three Kitties that Saved My Life by Michael Meyer 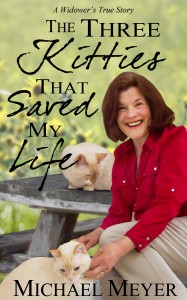 The Three Kitties that Saved My Life by Michael Meyer

What if you suddenly lost your partner through life? How would you find the will to go on all alone? Would you ever be able to fall in love again? This is the true story of my journey from grieving widower, not caring if I lived or died, to the once-again happily married man I am today, a man who both loves and cherishes life. My three kitties have given me a new zest for living.

My story begins with loss and tears, but it ends with lots of love and laughter. I hope that you will find yourself both entertained and inspired by my journey.

Michael Meyer is a retired English professor. He lives in Southern California wine country with his wife, Kitty, and their two adorable rescue cats.

Years after my first wife died, lonely as could be, I decided to see if I could find love again. I also knew that my deceased wife would want this from me. When I finally happened, I just knew that I had to put my story to words.

My life with Coco was good. We had a lot of fun together. Every day was joyful. I never knew from one day to the next what type of trouble the little guy would get himself into. There was always something new to explore, a new pose to assume.
But I still ached for close human contact. I wanted to be hugged. I wanted to be held in someone’s arms. I wanted to be loved, and to love, but I was scared and I also felt guilty feeling these thoughts, although I realized that they were all rational. I just could not force myself to take the first step in this direction. I would see couples holding hands, and I would be jealous. I would see couples embrace, and I would yearn for the same. I wanted to be with someone who cared for me, and I for her. However, the guilt at thinking such a thing, that I was somehow betraying the commitment that I had made to my deceased wife, still ate at me.
I was scared—of both the future and of what the past had already done to me. No matter how hard I tried, I just could not shake the feeling that somehow I would be betraying Ciba if I sought love again. I knew I was not thinking logically, but logic really had nothing to do with any of it. I was a lost man, and I so desperately wanted to be found. But that first step was huge, and it was so painful to contemplate.
“Tiny steps now, Mike,” I remember telling myself, but saying and doing are not the same.
It was clear that my legal commitment to her, “to love and to cherish until death do us part,” had been fully met, but the powerful emotional attachment still clung to me. I wanted to get on with my own life, but I could not. Time had frozen for me, and I was its prisoner.
I fought to move on, but I just could not. It was too painful. I spent huge chunks of my waking hours inside my head, trying to think things through. I listened to my sisters, and to my friends. My library of books and pamphlets on how to deal with losing one’s spouse kept growing.
I read everything I could get my hands on, but nothing could help me to break away from my thoughts of guilt. I read and reread, several times over, my complete library on coping with grief. I practically memorized each work. I could have been a professional grief counselor since I knew so much by now. The things I read were wonderfully written, right to the heart. I cherished every word, but still nothing seemed to really provide the jolt that I required.
That is until one day on the Internet, I stumbled upon a two-page response that a rabbi had written to a young woman who had posed the question, “How will I ever date again?” a year after the loss of her husband. For the first time since I had begun to scratch the urge to meet someone, the rabbi’s words had a profound impact on me, so profound, that after reading and rereading his words, after savoring every word, after thinking deeply about what he was saying, I was convinced that wanting to start dating was not only the right thing to do, but that it was exactly what my deceased wife would want me to do.
The whole two-page response made total sense to me, but the part that really convinced me was the following passage: “Your husband loved you and you loved your husband—you will never forget that. But his memory should not be a dark cloud that haunts your existence. Your memory of his life should be an inspiration, not a painful albatross.”
Pow! I had been hit smack dab over the head with precisely what my own problem was. I had defined myself as a widower. I was a widower. Everyone I met, learned this. The word defined my very existence.
And I was a widower, but that was not the whole me. I was also much more than that. I had forced my life into a box, and now it was time to climb out from that confinement. I would do so with love and dignity, never forgetting how my deceased wife had loved me and how I still loved her. I knew in my heart that she would want me to be happy. The rabbi’s words convinced me of that.
I had no idea how to date. What would I say? How would I act? Where would I meet someone?