You are here: Products The Thing About Rainbows by Mack Kittle 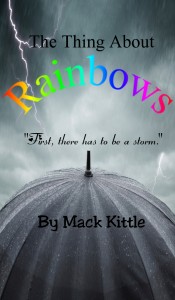 The Thing About Rainbows by Mack Kittle

Kate is everything Hank’s been looking for — fun, funny, sexy . . . sane. There’s only one problem. He stumbles on an old Internet dating profile and finds out he’s nothing like the man she was seeking.

After an argument, Kate must convince Hank that she’s finally figured out that the man of her dreams isn’t sitting on a shelf somewhere prepackaged to her specifications. For his part, Hank must convince Kate that he can put the past behind him and that lasting relationships, like rainbows, are forged during times of turbulence.

I’m a freelance writer and editor who for many years labored as a reporter. I live in the amalgamation fondly known as North Texas, where I’ve been cast in my own version of “This Old House.” Thankfully, while repairs are a pain, things like patching a hole in the wall and having the reparation all but disappear bolster my ego in a way little else can. My housemates are three rescue dogs: Bella, Marti and Sparky. While undeniably a beautiful American terrier, Bella is named for her penchant to bellow when I come home. Her sister, Marti, has a mostly white face that’s alien-looking, not to mention she’s downright spooky at knowing which hand’s holding the treat. Sparky is a large goofy Dalmatian mix. The way he opens his mouth and shakes his head when he’s playing makes me think that must be how dogs laugh. And, yes, I sometimes wonder who rescued who.

I heard an acquaintance complaining about online dating. He said many of the women knew who they were looking for down to his height, weight and eye color. There was little room left for serendipity. I thought it would be fun to play around with that idea in a book.