You are here: Products The Thing About Goodbye by Flora Burgos 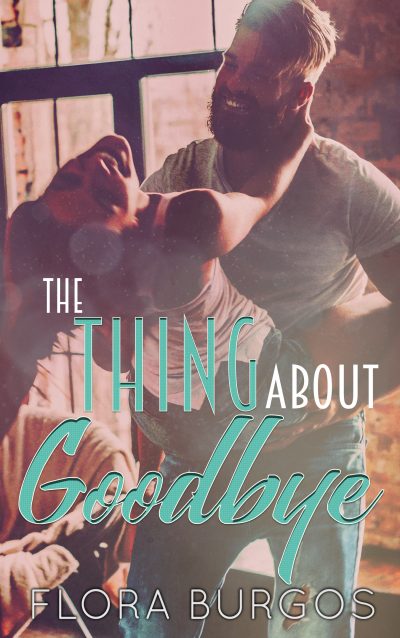 The Thing About Goodbye by Flora Burgos

Flora Burgos is a romance author from the great state of Texas. She found reading at a very tender age, devouring the bodice rippers of yore, long before she ever even had her first kiss. After an unconventional childhood and tons of travel, she is now a 30-something that steps to her own beat, just that little bit past normal. She's a modern-day hippie, with the heart of a gypsy and the soul of a dreamer and a love for animals and words that mere words do not do justice to. She has an eclectic playlist containing everything from film scores to hip hop and country to hair bands with any and everything in between. She curses like a sailor, is addicted to coffee and diet coke, loves her pit bull, hubby, and preteen son more than anything else in the world and spends her limited free time, when not reading or writing, in the kitchen with her guys where they enjoy cooking as a family.

I was sitting around with my sisters on Thanksgiving after the food had been put away while the kids were running around outside and one of them said something, I don't even remember what, and Camille popped into my head. I picked up a journal (I have millions) and there was a collective groan before I tuned them out and started putting down the bones of the story. I worked through the holiday and had my first draft by February!

Prologue
In all the places in the whole entire world, in none of my wildest imaginings, did I ever think the boy who had broken my heart and destroyed every plan we had made as a couple almost four years ago would show up at my apartment unannounced and unexpected. And yet, none other than Luka Prescott had just walked through the front door of our party celebrating that we were college grads.
Isn’t that just ironic.
Rei walked to the door, singing loudly with the music playing, and opened it, greeting someone equally loudly. When he came back into view, he was accompanied by another man, and they were laughing and joking about something.
Out of the corner of my eye I got a quick glimpse of bold, tattooed arms and dark messy hair, and I had the impression that he had facial hair, but I couldn’t say for certain because I was distracted from him when a friend called my name.
No, it wasn’t until he spoke that I felt a chill go down my spine and a shiver of recognition creep into my heart.
That voice was one I would never forget. One that had haunted me for over four years with its absence. It was surreal to watch as the world kept turning and everyone around me kept talking and laughing, caught up in the excitement of such a momentous occasion when in that very moment, my life as I knew it was crashing down around me.
Again.
My eyes shot across the room to the only other person who would recognize that voice. Leah had her eyes glued to his wide, muscular back and was staring at him with a look of confusion on her face. Rei turned to her and shouted over the melee, “Lee! Come meet my boy, Luke!”
The unexpected nickname had me doing a double take and eyeing the man with the laugh that had frozen me in my tracks. I caught sight of him, and as he turned in profile and I saw all that was him, I knew. I knew. Luka Holden Prescott had just strolled through the door and crash landed in my life once again. Luka mother-effing Prescott.
If the ghosts of my dead parents had walked through the door and started up a Conga line, I would have been less shocked.
Considering the last time that I’d laid eyes on him, he was being detained by the Arapahoe County Sheriff’s Department, I had never expected to see him again.
My heart was racing, and my whole body was tingling—with panic or elation, I wasn’t sure yet which. Most certainly, I was confused because he had forced me out of his life and yet, here he was, standing just inside the door of the apartment we could have been sharing together at this very moment if things hadn’t turned out the way they had.
Across the room, I made eye contact with him, and his mouth gaped wide before snapping shut and the corner of his lips tilted up. I watched in awe as the look that crept across his face, first shock and then shifting into something way more intense, something profound, chased it away. That was when my heart fell through my body and crash-landed on the floor, at my feet.