You are here: Products The Sun King by Sandra Kyle 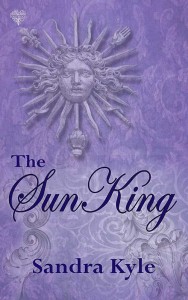 The Sun King by Sandra Kyle

Young Cecilia Danet is introduced to the opulent world of royalty when she joins the court of King Louis XIV—the Sun King. Having been groomed her whole life for the role of a courtesan prepares her for everything but the intense passion she feels with the brooding and powerful Louis. Their romance builds, but an intriguing twist changes the trajectory of Cecilia’s course and leaves her caught in the middle of a royal love triangle.

Sandra is an avid moviephile and introvert, and will read anything from Austen to King. She resides on the East Coast with her husband and bipolar feline.

I have loved swashbuckling tales since I was little. I read Alexandre Dumas’ The Man in the Iron Mask (after watching a film based on the book) almost two decades ago and became even more intrigued with the reign of Louis XIV. And then my romance daydreaming took over: heaving bosoms under desperately tight corsets, possessive men with lust in their eyes… you get the idea.