You are here: Products The Summers We Lost by Helen Blacksmith 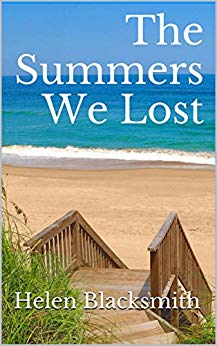 The Summers We Lost by Helen Blacksmith

After the death of her mother, successful physical therapist Tara Jameson returns to her family’s beach house on the Outer Banks that she had not been to since her heart was broken nearly thirty years ago. The cause of that heartbreak was Gwen Patterson. Seen as not worthy of her daughter, Tara’s mother made certain that they wouldn’t be able to continue their friendship or blossoming relationship and chose to rent out the beach house instead of returning there the following summers. Forced to go in different directions, the women moved on with their lives but never forgot the relationship that was abruptly cut short. Reunited after thirty years, the two women immediately pick up where they left off and eventually the sexual tension escalates and explodes. But has too much time passed? Will it only be a summer fling to end what was left unfinished or will they finally be able to build a future together?

Helen Blacksmith is the pen name of this Western Mass native. Her free time is spent with her two pit bulls, Olive Oyl and Osczskar, and she enjoys drawing, traveling, food, music, and tattoos. Her favorite authors include Maya Angelou, William Shakespeare, and Janet Evanovich. She is also a lover of soccer, the Red Sox and the New England Patriots.

I wanted to tell a love story that everyone could relate to.

“Tara Jameson Harper! Get your skinny little behind down out of that tree! You are wearing a dress young lady!”

“Oh Serena, give her a break. She’s only five.”

“That’s no excuse for her to act like a heathen, Edwin!”

“You need to give that girl a break. Not everything is about etiquette and manners. You need to let her be a kid for a little while.”

“When you come from where we come from Edwin everything is about etiquette and manners and she needs to learn.”

“She also needs to learn how to be a human being,’ he muttered as his wife walked away.

They had just arrived at the beach a little less than a half an hour ago and as they climbed out of their car TJ had heard the familiar squeals and laughter of other kids down on the beach. Knowing that her mother wouldn’t let her go down and join them she instead climbed up into the large Oak tree at the end of the driveway until she could see who belonged to the shrieks and squeals. There were two of them: a little blonde boy about three years old and a blonde girl that seemed like she was a little bit older than her. Both were both dressed in tank tops and shorts and neither of them was wearing shoes. There was a blonde woman sitting in a lounge chair closer to the water and TJ could only assume that she was their mother.

“Papa?” little TJ called as she climbed out of the Live Oak that was planted by her great-grandfather near the driveway in their front yard.

‘Yes, my sunshine?’ he answered as she ran into his arms and he picked her up.

TJ always loved how strong her Papa’s arms were and would climb into them any chance she got. And truth be told, he loved holding her. He knew that one day she would be too big to pick up, and he cherished this time while he could.

“Can I go play on the beach? I’ll stay by the stairs! I promise!’

“Now sugar, you know your Mama’s rules about that.”

“Pleassssssssse, Papa! I won’t leave the bottom stair! I promise!”
Edwin could only laugh at his daughter’s pleas because he knew that while he tried to be hard with her he just couldn’t and what his baby girl wanted she usually got.

“Thanks, Papa,” TJ squealed as she wrapped her skinny arms around his neck and kissed him on his cheek.

As she ran to the deck of the beach stairs, TJ kicked off her shoes and quickly made her way down the first flight of stairs. Suddenly, feeling shy, she decided to sit on the top stair of the second flight. This wasn’t typical for her. Usually, she had no problem joining other children her age or talking to them. But there was something about the blonde girl that made her pause.

Her hair was long, just passed her shoulders, and she wore it in a French braid. Her eyes looked blue from this distance, but they could have been hazel. She was thin, but she had lean muscular arms and legs something you usually didn’t see in a child her age. She was strong and wild, chasing her brother through the sand with buckets of water, and splashing them all over him causing him to squeal in laughter. In turn, he would pick up fistfuls of wet sand and throw them at her. They were filthy and sweaty and wet, and TJ longed to join in their fun, but she knew her mother would never allow it.

Pulled out of her thoughts TJ suddenly noticed that it was the young blonde that had called her. Looking around, TJ pointed at herself, nonverbally asking if it was her that the girl was calling.

“Hold on!” she called back as she ran over and took the stairs two at a time stopping right in front of her.

“My name is Tara, but everyone calls me TJ. I’m five. I’ll be six in August.”

“Nice to meet you TJ. That’s Simon,” the lean girl said as she pointed at the little blonde boy that was now dumping a mixture of water and sand on his own head. “He’s three and a real pain in my butt.”

TJ couldn’t help but giggle and covered her mouth in shock at Gwen’s use of the word butt.

“Mama would be mad if she heard me say it. She says ladies don’t say stuff like that.”

“Well, I know it doesn’t look like it,” Gwen announced as she held out her arms and indicated her dirty, sweaty body, “but I’m a lady and I say butt all the time. So, your Mama is wrong.”

“That’s what my Papa says.”

“Tara Jameson Harper? Where are you?”

“Is this the house you’re staying in? How long are you staying for?”

“Good! Me too! I’m staying in that white house over there. With the big white porch? See it?”

TJ nodded as Gwen continued, “Used to be Titi Harriet’s house but she died and gave it to my Pops, but all he does is work so he’s not coming until August. And we’re staying the summer too. I think we should be friends, TJ. I think we’ll have a lot of fun.”

“I do too,” she smiled before running back up the stairs as her mother called her name even louder this time. “I’ll see you around Gwen!” she called.