You are here: Products The Succubus: Sins of the Flesh by Vanna B. 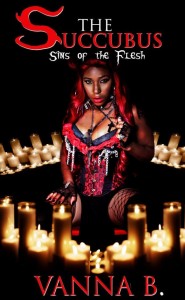 The Succubus: Sins of the Flesh by Vanna B.

Dressed in strange clothing and covered in tattoos and piercings, Raven DuBois appears to be just another goth college student rebelling through her unusual, dark style. Darrin Brown, on the other hand is as boring as they come. Before moving to NYC to complete his sociology degree, the Average Joe knew nothing more than church, the four walls of his Detroit home, and his Plain Jane girlfriend, Melody.

Raven is spontaneous…unpredictable…dangerous. She’s unlike anyone Darrin has ever met and he’s instantly intrigued by her unique style, killer body and seductive ways. But he soon finds there is much more to her than meets the eye.

After getting a taste of what Raven has to offer, Darrin can’t get enough. He soon falls deep under her spell and will do anything she asks of him, without questioning. He finds himself a pawn in her wicked game; a game in which he stands to lose more than he ever imagined – including his soul.

Vanna B. is an author and publisher of fiction novels. The Hope Street Publishing CEO is a native of Philadelphia, PA and received her BA in journalism from Temple University. Writing has been a life-long passion of hers and she always planned on authoring books. Vanna’s professional writing career began with newspapers and magazines, where she served as a restaurant reviewer, proofreader, advice columnist and staff writer covering a range of topics including current events, local politics and culture. After making the decision to leave the workforce to stay home to raise her son, she began penning her first novel, Fancy. Fancy went on to be a huge success, landing on the Amazon Kindle best-sellers list for multiple categories, earning Vanna the 2012 Philly Hip Hop award for “Best Author,” being featured in The Source Magazine, and receiving overwhelmingly positively reviews. This year its sequel, Fancy 2, and her novel, Knock-off Nina, also made the Kindle best-sellers list, and Vanna was nominated for two AAMBC Awards as well as two Urban Literary Awards. “I’m incredibly grateful that my work is being so well received,” Vanna says. “I love writing and sharing my gift with others, and I work very hard at providing top-notch material with the goal of bringing readers a unique and memorable experience.”

After turning off the shower, Darrin exited the steam-filled bathroom with a towel wrapped around his waist. He selected a pair of blue plaid boxer shorts and dropped his towel. Before stepping into his underwear, he stopped to admire his naked body in the mirror. He curled his arm tightly and watched his bicep muscle rise.
“Nice,” a sultry voice called out from his bed. It was Raven. She was laid atop his comforter spread eagle, the delicate fingers of her right hand gently petting her treasure box while the other raised a lit cigarette to her parted lips.
She looked at him with a come-hither stare that made words unnecessary. He walked to her, stroking his hardening member. Her nipples were firm; milk chocolate twins that seemed to be staring at him, begging to be tasted. His tongue greeted one; French-kissing it as it if could kiss him back. Then, the other – he provided it with the same attention so as not to make the first one jealous. He smiled at the thought.
“Lie down,” said Raven as she blew the last of the cigarette smoke from her lungs and rudely butted the stump out on his bedside table.
He eagerly obliged, one hand lustfully stroking his shaft while he placed the other behind his head and closed his eyes, readily anticipating her touch. He wasn’t expecting her to sit on his face, but that is exactly what she did.
Her faucet was already leaking, trickling down into his mouth and onto his face. Like a striking cobra, his tongue sprang from his mouth. It slithered its way into her flower, thirsty for more of its nectar. The intense sweetness made his taste buds tingle. His tongue fervently wriggled about, desperate to fulfill its insatiable craving for more, and Darrin soon began sucking like a starving infant at its mother’s breast. Abandoning all civility, he slurped every drop that spilled from her opening, drinking from her well as if quenching his dying thirst. Raven felt his tongue spiraling around the inside of her walls. She fucked his tongue savagely, determined to give him more of the cream filling he so desired. Squeezing her eyes shut, she announced that she was coming and blissfully spewed out a mouthful of Darrin’s new favorite beverage.

Be the first to review “The Succubus: Sins of the Flesh by Vanna B.” Cancel reply