You are here: Products The Substitute 1 by Ada O’Flaherty 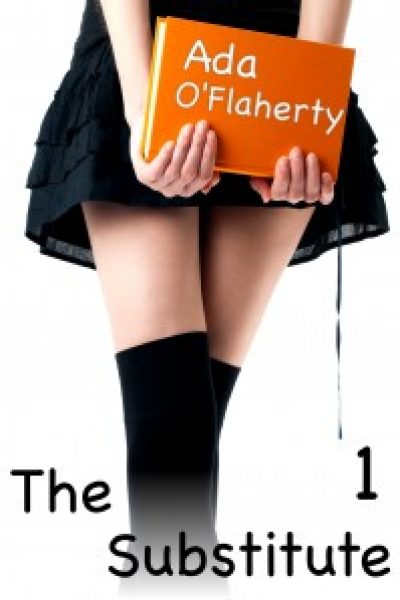 The Substitute 1 by Ada O’Flaherty

If you like to watch a sweet, hot young barely-legal girl made to take a grown man’s very large cock… then this is your story. Did I mention she’s a virgin?

Mr. Ryan has had it with the sweet little tart who lacks respect for him as a teacher. He’s determined to teach her a lesson but learns one himself – that you should never judge a book by its cover.

WARNING: Includes explicit sex between a barely-eighteen year old girl and a gorgeous man, punishment spanking, loss of virginity, and breeding of a virgin. It is intended for readers 18+ years of age. Enjoy!!!

Outside my head, I live a simple, quiet life filled with the love of a good man and lots of critters at my feet. Inside my head, I explore the questions posed to me by the characters I write about. Along the way, I sincerely hope to bring some pleasure into a reader’s life through my words. I hope to provide a refuge for your innermost thoughts.

I wrote this book to capture a teacher / student dynamic of a flirty girl being taught to pay attention. Yet, the series became much more than that. It became an involved story of a young girl whose father filled her mind with ideas just before he died. Now that young girl’s teacher is put in a position to be a substitute for her father in ways he never dreamed.

Virginia rolled her eyes at him for the fifth time that period. Mr. Ryan had to squelch his temper for the eighth time. Every day she came in here dressed like a tramp. Her skirt ever shorter, her breasts full and round, and her mouth so damn pouty he got an erection just knowing she was in the room. That he was mind numbingly attracted to her was his problem but that didn’t mean he had to condone or even tolerate her behavior.
The bell rang and the class emptied out. As Virginia walked by, Mr. Ryan asked her to stay a moment. He moved to the door and as the last student left, he closed and locked It. It was made of thick solid wood and was windowless. It was a door that belonged on a fortress—or a dungeon. He turned and looked at Virginia.
She stood with her hip against his desk and her nose in her phone, her dark, pixy hair falling forward around her face. She was so busy texting that she hadn’t even noticed the situation she was in. His cock throbbed and his heart pounded in anticipation of what he was about to do. He unbuckled his belt as he walked back to her.
Reaching for her, he firmly gripped her wrist in one hand and took away her phone with the other. She was too shocked to resist. Looking up into his face, she gasped at what she saw there. Before she even had time to fully register how angry he was, he had her pulled over his lap as he sat on the edge of his desk.
One strong arm held her in place while the other pulled his belt free from his waist. He doubled the leather strap into a loop, raised it high above his head and brought it down hard on her dress covered backside with a muted crack. She screeched more than screamed. In less than a second his arm was raised and falling again. The crack of the belt strap came louder this time as it fell half on the cloth of her dress and half on the bare skin of her thighs.
She wiggled wildly on his lap, desperate to escape her punishment. But, there was no chance of that. His arms were powerful and her wiggling did her no good. In fact, to his delight, her wiggling caused her flouncy black dress to ride high on her hips, leaving her smooth, round rump defenseless to the continued lash of his belt. It wasn’t his fault that she was exposed. If she had accepted her spanking as she should, her dress would have remained in place. But now that she was exposed, Mr. Ryan wanted nothing more than to have her soft, round rear completely vulnerable to the sting of his belt. With a quick tug, he adjusted her panties so that they pulled into the sweet little crevice between her inviting cheeks. He was glad she was accepting the spanking so poorly. Her struggling made him crave to do so much more than punish her.