You are here: Products The Submissive’s Last Word (The Power to Please, Book 4) by Deena Ward 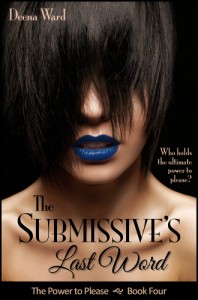 The Submissive’s Last Word (The Power to Please, Book 4) by Deena Ward

Despondent and adrift, Nonnie lingers in self-enforced exile on Gibson Reeve’s estate. The daunting task of rebuilding her life seems more than she can face.

I’d never been anywhere so magical, so perfectly easy, and maybe that was why I couldn’t make a plan, why I couldn’t move. Any plans I might make involved leaving. No one in their right mind would want to leave this place. Or these people.

Or one powerful man in particular, a man who visited me in my dreams and called me beautiful, who touched me in a way that made me believe no one had ever humiliated or degraded me. With him I felt whole again. Maybe only with him. Maybe only here.

Nonnie has more allies than she realizes, chief among them Gibson Reeves. His knowledge can help her heal, if only she’ll trust him and listen to some hard truths.

Trust and truth. They’ll need both as they try to find their way back to one another, while they struggle to earn indestructible love … and when at long last, they reach to claim the ultimate power to please.

Be the first to review “The Submissive’s Last Word (The Power to Please, Book 4) by Deena Ward” Cancel reply