You are here: Products The Star Agency by R.E.Weber 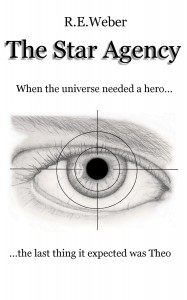 The Star Agency by R.E.Weber

The Star Agency is an interstellar secret agent adventure for readers aged 10 and above. It follows the adventures of a thirteen-year-old boy, Theopolis James Logan, and several of Earth’s brightest young people, thrust into a life of excitement and danger on another world, defending a galactic alliance against a dangerous and resourceful enemy.

Despite its sometimes-fantastical elements, the story is strongly character based, dealing with friendship, fear, love, loss and the growing pains of teenage life. But it is also a rousing adventure full of excitement, intrigue, romance and humour.

Currently lives in Bedfordshire, England with his wife & cat.

It was inspired by my love of 80’s Science Fiction movies and is written from the point of view of being the type of book that I would have liked to have read when I was younger.

Prologue
Almost as quickly as it had started, the loud cracking noise stopped, and for a moment all Theo could hear was the sound of his own laboured breathing and thumping heart. Even through his suit, he could feel the intense cold rising up from the floor – which was already well below freezing – through every bone in his body and up to the tip of his exposed nose, which had already lost all sensation. His whole body ached and he so wanted to jump up and down and rub his hands together to keep warm, but he didn’t. However cold he felt now, he knew it was going to be nothing compared to what he was about to experience.
Then, it happened. There was a loud bang and Theo knew that the cracked observation window had finally shattered. Immediately, he took a deep breath, and as he did so a freezing cold wall of air slammed into him from behind, lifting him clean off his feet and flinging him forwards, like a helpless rag doll, through the gaping hole where the observation window had been. For a moment, he didn’t feel the intense cold outside. Then suddenly, it hit him, like thousands of tiny, freezing needles stabbing every part of his body. Instinctively, Theo curled himself into a tight ball to conserve as much heat as possible, but it didn’t seem to help. Even with the protection of his suit and with his body squeezed tightly upon itself, the cold was more intense than he had ever imagined was possible.
For long moments, nothing seemed to happen, and Theo felt like he was somehow frozen in mid-air. He knew he should have hit the ground by now – had there been any ground beneath him – but he hadn’t. Instead, he was still tumbling through the thin, freezing air, and that could only mean one thing: he had been blown clear of the cliff edge and was now tumbling into the massive canyon below.
Then a sudden wave of dizziness swept over him, and his thoughts, which moments ago had been so clear and distinct, began to swim away from him almost as if he’d been drugged. His instinct was to open his mouth and take a deep gulp of air to fill his aching lungs and bring his mind back into focus. Yet somehow, even now, a tiny part of his logical mind held on knowing that it was pointless. Instead, he continued to hold his breath, guessing that it wouldn’t be long before he lost consciousness…

Be the first to review “The Star Agency by R.E.Weber” Cancel reply