You are here: Products The Spider Affair by Decibelle Pound 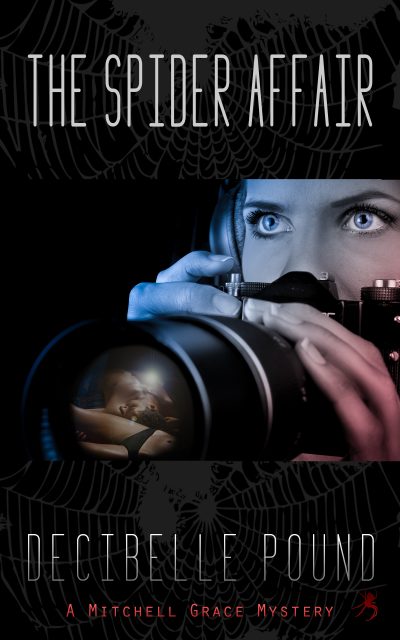 The Spider Affair by Decibelle Pound

What would you do if you found yourself trapped in a web of sex and lies?

Mitchell Grace is a private detective, emphasis on the private. She likes her own privacy, but can always be persuaded to intrude on others’, if it gets her what she wants. As a voyeur, her clients bring her sob stories of extra-marital affairs, romances and unexplained behaviour; she brings them the proof. And if the proof is something she enjoys watching? Well, so much the better.

Mitchell’s caseload is consistent, and consistently satisfying, so when an unexpected client pushes through her office doors, she is unprepared for the journey her life is about to take.

Caught in a web she cannot see and cannot make sense of, Mitchell seeks the support of old lovers, while evermore stumbling closer and closer to the desperate truth. Mitchell’s steamy and passion-filled relationships both ground her and send her spiralling further out of control.

Readers of erotica, detective and crime fiction will find a fast-paced romp of a read, full of sex, smut and fun.

From the publishers of Aotearotica, New Zealand’s first and only magazine of literary sex and sexuality, The Spider Affair is full of sex, intrigue and lust. The first of The Mitchell Grace Mysteries is sure to kindle a burning need for the rest of the series!

By day Decibelle Pound is a receptionist for an accounting firm in St Albans, New Zealand. She enjoys swimming, looking after her spaniel, Toby, and reading and writing spicy novels with complex female protagonists. By night she lets her imagination take over and delves into a world she can only dream of having.

Until The Spider Affair and the subsequent books in The Mitchell Grace Mysteries I'd only ever written for myself. I suppose that the books were a challenge to myself to see if I could do it and then to see where I could take them!

I spent a lot of time trying to come up with the initial character of Mitchell. I wanted a couple of things for the main character. They had to have an occupation that would allow them to be in a variety of different situations. And they had to have a high sex drive. Mitchell is a voyeur and Private Investigator. Her nature and occupation are intertwined, almost one and the same.

As for was it inspired by anything in particular… um… inappropriate workplace daydreaming? 😉

“I spend the afternoon in a tree, watching the Crest house through a telephoto lens. After scrambling up into the lower boughs, it has been an easy job to clamber up to a vantage point where I can see easily through the 600mm Sigma lens into both the downstairs lounge and upstairs master bedroom. Tom is out, his town car absent from the open garage, either at work or elsewhere, but I catch recurring glances of Ariadne as she moves through the house in a fur-trimmed chiffon robe that leaves little to the imagination. I take a few snaps.
Around four o’clock, I’ve grown uncomfortable, and I’m considering climbing down when a compact car pulls up and Angela gets out of the passenger side and scurries inside. A moment later, she appears in the lounge with Ariadne and I take a few more snaps of them clearly arguing. Or rather, Ariadne shouting and Angela cowering. I’ve watched more than enough disputes between people in my time to know that I have the shots I need so I zoom into the driver’s seat of the car waiting for Angela. The driver is a Latino hipster-looking guy, around the same age as Angela. Her boyfriend, I guess. I zoom in a little further onto his hand and twist the focal rings until the detail crystalizes. No, not her boyfriend, her husband. Interesting. I find young married people equal parts adorable and revolting.
Inside, I see that Ariadne has headed upstairs and Angela is sorting through an accordion folder of documents. Ariadne sits on the bed, picks up her phone and dials it. Surprisingly, the guy in the car pulls out his phone and answers it. Very interesting. Even more interesting when Ariadne slides her hand into her black silk briefs and starts touching herself. I click the shutter and pull back to see what effect this is having on the guy in the car. His pants are undone and his hand is sliding up and down the length of his cock while he speaks. As I watch him masturbate, he takes the phone away from his ear and looks at something on the screen. His mouth drops open involuntarily and his hand moves faster, pumping his cock. Reframing my shot into the bedroom window, I realize why. Ariadne has her phone between her legs. She’s pulled her underwear to the side and is live-streaming herself, a dildo slowly sliding in and out of her pussy, as she strokes her clit with her other hand. And Angela’s husband is lapping it up in the car below. I realize I’m grinding myself against the branch I am straddling, just as I lean too far forward and fall out of the tree. ”