You are here: Products The Songbird and the Secret by Celena M. Janton 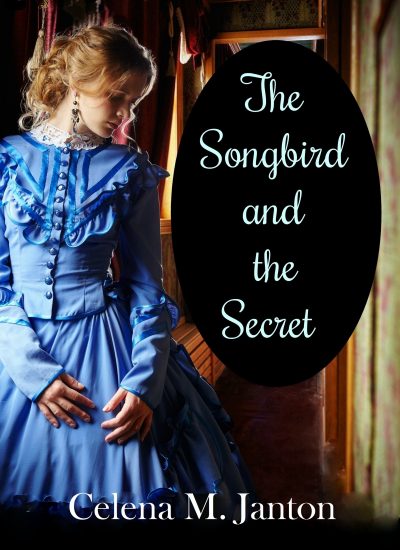 The Songbird and the Secret by Celena M. Janton

When Katharina Simeon makes a secret promise, she never stops to wonder what consequences may come of it. Yet 200 years later, far from her home in 18th century England, that very promise is carried across time and the Atlantic to rest upon her descendant…

Melissa Benjamin discovers her eleventh great grandmother’s journal while researching her senior history project. Sent down a path she never imagined venturing, Katharina’s intriguing story leads Melissa on a quest to find the parents she’s never known even as she unravels a secret spanning generations. During her search, history buff and schoolgirl crush, Tom Berington, offers to help… but will his aid come at a price too high to pay? And what secrets of his own is Tom hiding?

The Songbird and the Secret is a blend of historical and contemporary Christian fiction sweeping from 18th century England to pre-Revolutionary America, onward to life today. As the reader discovers Katharina’s thrilling story along with Melissa, a mysterious tale weaves together the lives of these two women separated by hundreds of years but joined through an ancient family secret. When each is faced with heartrending disappointment, will she cling to the one who loves her unconditionally?

I was intrigued by one of my ancestors, a woman who was taken captive by a Mohawk tribe during the American Revolution. She chose to stay with them and marry into the tribe, despite being offered her freedom. The Songbird and the Secret is in many ways based on her life.

The Ship “The Lyon”
Somewhere in the Atlantic
September 1756

She stood at the prow of the ship. Alone.
“It is dangerous for a beautiful young woman to be here, Katharina.”
The words were not spoken aloud, but to her remembrance. The voice in her memory had been filled with kindness. Warmth. Protection.
And now she would never hear that voice again.
And yet there was another voice. A voice yet more kind, more protecting. A still, small voice that was always near. Time and again on this journey across the seas, he had proven that.
Katharina breathed in the scent of the briny ocean, no longer sickened by it as she had been at the start of their journey. Where before it had signified all she had lost, it now seemed to bring with it the excitement of a new hope, a future she knew God had planned for her, a story he was writing with his own hand.
The wind played havoc with the ribbons of her hat. Silken maroon streamers suddenly floated in the air before her, making her realize too late she had forgotten to tie them under her chin in her rush to get out of the dank lower deck with its putrid scents. Her hat followed after the ribbons, floating in the morning breeze. She reached for it, groaning as she leaned over the railing. The wood creaked beneath her weight, slight as she was. She stood on tip-toe, stretching. Almost. The wood cracked. She gasped, sucking in a breath as the foaming water below seemed to rush toward her.
A masculine hand wrapped around her, pulling her back just as his other hand clutched onto her hat. She fell against the strong chest behind her. Her breaths came in gasps.
“Francis.” Make light of it, Katharina. She stepped away, turning to beam at her rescuer. “My hero, always just in time.”
Francis grinned at her praise. His dark hair, even midnight black in the sunlight, blew across a strong brow. Katharina reached a hand up, brushing her fingers against the soft hair at his temple. He liked when she spoke this way. Acted this way. She would have to remember to do so often in their marriage. She did love him. Did want to please him, but this had all come upon her so unexpectedly. She had much to learn, and no teacher.
Dawn’s sun shone down upon the newlyweds. Wispy clouds bathed in pale pinks, purples, and oranges spread across the sky.
“Look at the clouds.” Francis turned Katharina toward the eastern sky. “Do you see that?”
She squinted, shaking her head.
Francis bent to look at her, the familiar broad grin spreading across his features. He was a handsome man. And he was her husband. She had to continually remind herself.
“I see a pretty little girl with strawberry blond braids,” he was saying, “and a dainty nose, and blue eyes.”
“The cloud-Katharina,” she whispered.
“You didn't forget.” He pulled her into a warm hug.
“How could I?” Katharina leaned over the ship’s railing, remembering…

Be the first to review “The Songbird and the Secret by Celena M. Janton” Cancel reply