You are here: Products The Shifter: The Daemon Paranormal Romance Chronicles, Book 2 by Darla Dunbar 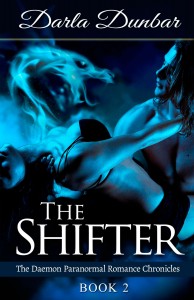 After meeting the stranger, Apollo, Phoebe thought she had sorted out the issues in her life. Once her mission was completed, a new leader was supposed to emerge.

Instead, she was faced with a double-cross in the hands of both her long-time friend and her lover. How could they do this to her?

Not able to trust anyone, Phoebe took the only option available to her. Withdraw and hide.

Now it was up to Supay to persuade Phoebe to help make peace among the Daemons.

I love to combine the paranormal with romance and erotica and writing about mystical and powerful males and their female partners. I want my readers to take a romantic hot mysterious journey through my characters.

Be the first to review “The Shifter: The Daemon Paranormal Romance Chronicles, Book 2 by Darla Dunbar” Cancel reply