You are here: Products The Servant (The Vampire Desjardins Book 1) by Camilla Klaus 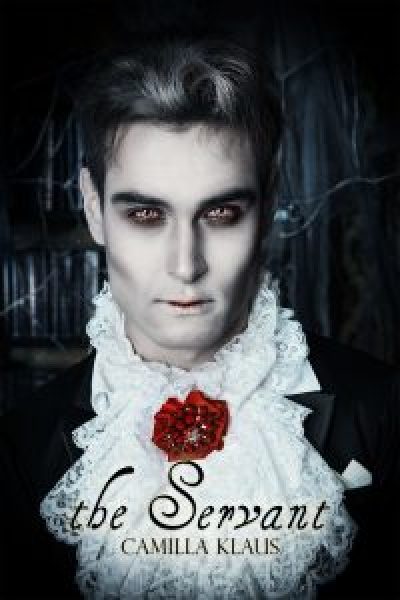 The Servant (The Vampire Desjardins Book 1) by Camilla Klaus

After finishing her bachelor’s degree in history, she decided to pursue her passions and write full time. She is a lover of the unconventional, the surreal, the untamed. Her writing is inspired by her background in history, the gorgeous landscapes of the Pacific Northwest, and her love of the supernatural and fantasy.

There was something unusual about the man. He sat opposite from me at a large wooden desk, twirling a quill idly between his fingers. His hair was shoulder length, thick, white. His skin, too, was a shade so pale that it seemed almost silvery and blue.
I stared at his nails. They were clear—not a speck of dust or grime dirtied those dainty fingers—and a bit too long, yet manicured perfectly into sharp points.
He had insisted that the interview be conducted at night. I had found it a bit peculiar, but I was in desperate need of work. It was late autumn, and though the southern Louisiana heat had died down significantly over the past few months, the air still felt heavy and wet with humidity.
“It’s a pleasure to make your acquaintance, Miss, ah, what was the name again?” His eyes were a striking grey with a little ring of gold around the irises. He looked at me attentively, never once breaking his gaze.
“Estelle,” I stammered. “Lémieux.” Don’t stutter, Estelle! You need this job!
He set the quill atop the desk and slowly leaned back into his chair. He was an attractive man, though rather slender and perhaps a bit youthful in appearance. He had a kind of androgyny about him, with delicate high cheekbones and soft, full red lips that stood out starkly against his pallid flesh.
He raised his brow and studied me curiously. “Estelle Lémieux?”
“Yes,” I nodded timidly. “I answered your advert and you responded to me via letter. I previously worked at the—”
He waved his hand lazily. “Oh, I know who you are my dear,” he said calmly—his voice was soft with a singsong like quality to it. “I merely forgot your name. You’re from the Comtois residence.”
Huh.
“I have my references.” I dug into my purse and fished out the letter. I set it on the desk and pushed it over to him. “They’ve had to cut down on hired help. Unfortunately, I was recently let go—”
“I told you, Estelle,” he interrupted. “I know who you are.”
I folded my hands into my lap nervously. How does he know about me? Was he friends with Mr. Comtois? I don’t think I’ve seen him before.
He titled his head to the side. “Do you know why I’ve asked you to come at night?”
I shook my head. “No,” I replied. Maybe he’s a bit familiar? No, no, I would have remembered someone like him.
“That’s fine,” he said with a hint of a smile. “I just need you to understand, that if you are to work here, you will have to keep odd hours. Would you be all right with that?”
I shrugged. “Well, I don’t see why not. I could adjust my schedule, I suppose.”
“Good!” His smiled widened to reveal a row of perfectly straight, uncannily white teeth. “You see,” he continued. “I need someone to help around the house at night. You’ll work alone and you’ll live separately from the field hands and the morning servants—don’t worry, though, you’ll be afforded your own cottage and a bit more privacy than the others. Could you handle that?”
“Sure,” I replied. Why are you agreeing so easily, Estelle?
“Good, good!” He tapped the desk with his sharp nails enthusiastically. “I live here with my two older brothers. Both widowers, unfortunately,” he frowned. Perhaps a bit too dramatically? “Our parents died, too, you know.”
I examined the man cautiously. Something about him seemed forced, fake. I shook the feeling—I didn’t want it to bother me. Stop making things up about people you’ve barely met, Estelle.
“But that’s boring, right?” He sighed. “Well, back to the matter at hand,” he went on. “I have a list of duties that you will be responsible for, but I’m sure it’s nothing that you can’t handle. You’ll be working for me, mostly. My brothers… well, my brothers are finicky, you’ll see what I mean when you meet them.”
He’s talking to you like he’s already given you the job, Estelle! I sat up straight in the chair. “I can handle anything, Mr. Desjardins, I promise.”
“Henrik, Estelle,” he placed his hand on his chest humbly. “Please, call me Henrik. I’m so tired of formalities these days.” He rolled his eyes playfully.
Huh.
That’s very unusual. “Um,” I stuttered. “All right? Henrik?”
He chuckled quietly. “When would you like to start, Estelle?”
A job. You need a job.
My heart nearly leapt from my chest and out of my throat. Thank god for this! And so soon, too!
“I can start whenever you’d like, mister… I mean, Henrik,” I returned his smile with my own.
“Good!” He stood up from his chair and stretched his hand across the desk in a gesture that beckoned for me to shake it. I looked to his nails once more—so clear, so sharp. Why are his nails like that?
“Well?” He wiggled his fingers. What’s wrong with his nails?
“Oh,” I said. Snap out of it! “Oh, I’m so sorry. Rather rude of me, yes?” I stood from my seat and held out my hand. I looked up. Henrik was at least six feet four in height and his shadow loomed over and dwarfed me in its presence. I gulped. You’re being nervous for no reason, girl!
Nails. What’s wrong with his nails?
He folded my palm over his fingers and raised my hand to his lips.
“Welcome home, darling.” He bowed and kissed the top of my hand, allowing his lips to linger over my skin for a bit longer than what seemed necessary.
I winced—his flesh was frightfully cold.
He released his grasp. As he did so, I watched as the skin around his eyes briefly twitched with a kind of subtle amusement. Does he know that he’s making you uncomfortable?
“Thank you,” I said and stepped back.