You are here: Products The Serpent’s Kiss by Madelynne Ellis 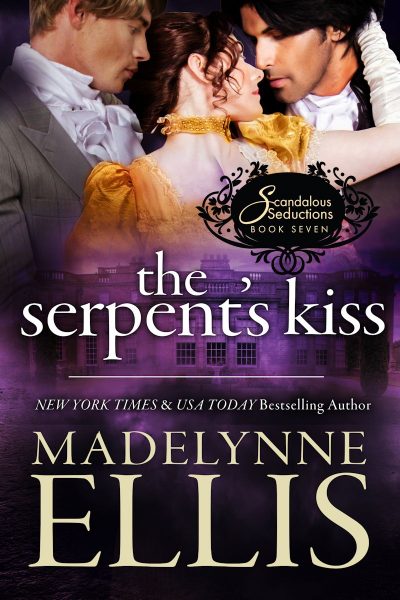 The Serpent’s Kiss by Madelynne Ellis

She’s the disgrace of the county…

Bella Rushdale has returned home still unwed having eloped with Viscount Marlinscar, and she’s now engaged in a scandalous liaison with the Marquis of Pennerley. Remote Yorkshire society is outraged!

Something ought to be done.

Even the untrained observer can see there’s something deliciously perplexing about the relationship between Bella and the two rascals responsible for her disgrace. As rumours of unnatural activities, forbidden pleasures and the inevitable repercussions abound, Bella vigorously resists her brother’s attempts to strong-arm her into wedlock. But, all too soon everything gets out of hand, putting Bella at risk of losing far more than her reputation. Can three people whose lives and hearts are so inexorably bound forge a lasting bond? Or is their love as ill-fated as society would have them believe?

Find out, in this tale of forbidden love between a marquis, his mistress, and the man they both once loved.

The Serpent’s Kiss is a Regency-set historical romance with a high heat including M/F, M/M and M/M/F interactions. Those of a timid or nervous disposition are warned against indulging.

Madelynne drinks decaf out of preference and has a healthy obsession with a certain Japanese rock star. She has a degree in Biology & Chemistry and a fetish for notebooks. She loves connecting with her readers.

“What are you doing here, Bella?” Vaughan stripped off his coat, so that he was in his waistcoat and shirtsleeves, a warning he meant business if ever there was one. Well, she meant business too. Bella opened her mouth to repeat her accusation, but Vaughan waved away the remark before she’d even uttered it. “Please, do me the honour of not lying to me. This is not about what happened or didn’t between you and him nearly four years hence. Or even the results of my interference. If he’d truly wanted you then, he’d have wed you despite anything I had to say. He’s a grown man, and eminently capable of making atrocious decisions all on his own.”
“But you…”
“Did I use my influence to steer him in a certain direction? I just admitted as much. Of course I did. How would it have benefited me to see you both exchange matrimonial vows? I was never going to be the third party in your marriage, but that hardly needs spelling out, does it? You’ve know it all along. Now, if you wish to continue wasting your breath chastising me for that, then allow me to apologise in advance for my rudeness, because I’ve no intention of staying to listen to it. If on the other hand, you’d like to tell me what it is you actually want, then—”
“Answers,” she blurted explosively. “I’m sick of secrets and machinations. I want to know exactly where I stand in your affections, assuming you hold me in any regard at all.”
“Oh, Bella.”
“What? You disposed of me yesterday like unwanted baggage and then went to him.”
Vaughan pulled her to his side again, so that when he spoke his breath flashed heat against her cheek. “Point one: I dropped you at Wyndfell out of courtesy to your brother, and for no other reason than that. Point two: I did not go to see Lucerne, or seek him out in any way. We did happen upon one another, but not through any design of mine. And in any case, what of it? We barely exchanged a handful of words.”
“No doubt you made up for that with actions.”
Laughter lines creased his face, though he didn’t chortle aloud. Instead, he dragged her closer still, so that she was bound within the circumference of his arms, and his scent played upon her senses. Whenever they were this close, she could not fail to react and warm to his touch. Still, she turned her head away from him.
“Gosh, he has you wound up tight. If our reunion had gone as you suppose, do you think I’d be standing here now listening to your jealous gripes? Do you think Lucerne would have been so eager to seek you out and drive a wedge between us? Think on why that might be to his benefit.”
“He was looking to renew our friendship.”
“And it’s customary when doing so to offer a woman a ring you once intended to present as a betrothal gift?”
“I do not know why he did that, other than to open my eyes to the truth that you’re no saint.”
He gave another scoffing laugh. “If you are not aware of my extensive list of vices by now, then you’re dangerously simpleminded. I think it’s perfectly clear that he meant it as a statement of intent. Clearly, he’s still in love with you.”
Bella stiffened. Was Lucerne still in love with her? Thinking back over their conversation, it seemed that he still possessed some affection for her, but love…She wasn’t sure how she felt about that. Surely the fires that had once consumed them were all burned out.
Vaughan ticked a finger under her chin, and lifted her gaze up to meet his. “Should I be concerned that you might run to him?”
She turned her head away from him again. “I made my choice, Vaughan. Nothing has altered.”
He gave a slight nod. “Then it might interest you to know that the only noteworthy event of yestereve was that I was forced to retire with a raging cockstand. It troubled me horribly all night. I was of half a mind to steal in through your window.”
Bella’s gaze dropped down to his loins, to see if it persisted still. “That would imply that you missed me, my lord,” she remarked, failing to neutralize a smile from tweaking her lips. He didn’t deserve her smiles. She was still mad at him. Motives be damned, he’d still acted against her interests.
“Mayhap, I did, Miss Rushdale. Mayhap I did.”