You are here: Products The Seduction of the Glen by Michelle Deerwester-Dalrymple 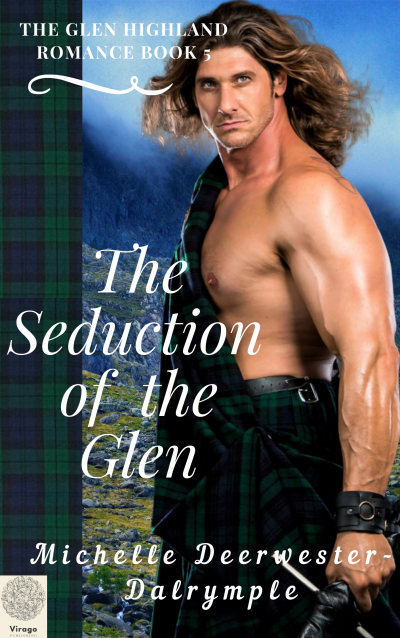 The Seduction of the Glen by Michelle Deerwester-Dalrymple

A fierce Highland warrior, loyal to his king. His beautiful English captive. He has vowed her protection, but will he have to risk his own life to do so?

John Sinclair, faithful warrior for Robert the Bruce, makes a fateful wager with his brother: whoever wins Aislynn’s affections will wed her. Only Aislynn de Valence, niece to the English King, is a captive of the Bruce, sent to the Highlands as a prisoner and for her own protection. The last thing she wants is to wed her enemy.

To win the wager and the woman, John woos Aislynn with his whole heart.
But the Highlands are unstable, clan fighting against clan. And no one in the Highlands is ready to welcome an Englishwoman into their midst.

When Aislynn learns that she was nothing more than a prize in a wager, she decides she’s had enough of Scotland and its Highlanders.

Can John convince Aislynn of his true intentions and protect her when she needs him the most?

Michelle is an author, professor, wife and mother of five! She writes several genres, but her passion has always been for historical romance, especially those highlanders!

I am a huge fan of historical romances, Highlander romances, and of Gabaldon's Outlander. When I finally decided it was time to pick up my pen for fiction, that is the direction I headed!

Auchinleck Castle, East Ayrshire, 1307
Another victory over the English meant even more drinking and celebrating. From his vantage on the second story of the Dumfries keep, recently freed from English dominion under the Earl of Pembroke Aymer de Valence, he watched his men, the faithful clans of Scotland in their bright and earthy plaids sing and cheer, and oh, how the whiskey and ale did flow.
Only King Robert the Bruce didn’t celebrate with them. He sat alone in the second-floor study, a low fire casting fearsome shadows on the coarse stone wall. He hated what he had to do next, but there was no choice. ‘Twas nay the same as MacCollough’s sister, he tried to justify to himself. That Scottish lass had been a loyal woman, sister to a loyal Laird, one of the King’s closest advisers. And if MacCollough’s sister managed to outsmart the Bruce and wed a clansman she cared for, well, he could nay fault her for those actions. Said man was a loyal Scot as well.
But this? With the de Valence sisters? ‘Twas different. This time ‘twas not a loyal woman. ‘Twas not the sister of a clansman and close adviser and friend. Aislynn de Valence was the niece of the now defeated Aymer de Valence. She and her sister, Agnes, must be sent north, whether as captives or for future bargaining, the Bruce didn’t yet know. All he did know was he wasn’t about to let these assets go.
He flicked his eyes to the sturdy door, waiting for the knock. Asper Sinclair would be none too happy at this assignment, yet ‘twas necessary. Someone needed to take the lasses far into Scotland, hide them from the English, keep their location secret. A brave, honorable man who could keep the lasses safe. And so, what if the Bruce was selecting men sworn to bachelorhood as their escorts? If any of the Sinclair men found their way into the hearts of the lasses, matrimony would only solidify the Bruce’s position as king. And, perchance, form an alliance with the English instead of fostering an enemy.
The sharp rapping at the door finally arrived, and the King bade the man to enter. Asper Sinclair strode in, his head of thick red hair peering around the door before his battle-hardened body followed.
“My King. To what do I owe this honor?” His deep voice rumbled across the shadows of the study as he gave a curt bow. The King kept his eyes on the celebratory men below.
“Dinna call it an honor, yet, Sinclair.”

Aislynn’s slender arms clutched at her sister’s muscular shoulders, trying to shake some sense into the young woman. Though Aislynn was but a year older, and the women resembled each other well, sharing the same light-brown hair and peridot and hazel eyes, sometimes she felt more like a mother than a barely older sister.
And now she pleaded with Agnes, begging her to reconsider as she looked on her sister’s costume with horror. Agnes, dressed in a man’s dusky tunic and baggy brown braies that gathered at her calf and tucked into loose-fitting leather boots, neatly passed as a fresh lad.
With her hair hacked off by a dull knife and tucked under a dirty bonnet, Agnes felt secure in her appearance. No man would think her a lass or try to assail her. She could move freely across the lowlands before the pretend king decided her fate, which is exactly what she wanted. Aislynn tried to convince her otherwise.
“Please, Agnes, you will not make it dressed as a lad! You were raised as a lady! Please don’t try something so dangerous!”
“Dangerous?” Agnes screeched, her high pitch causing Aislynn’s panicking eyes to flit to the door, convinced someone had heard. “‘Tis much more dangerous to remain here and have the Bruce imprison us, or worse! The man is a villain, bent on the destruction of all things English, including us!” Agnes breathed in and tempered her anger, her face softening as she lovingly begged her sister. “Aislynn, I would feel safer if you came with us. We can make it to England, to our uncle, King Edward, and find sanctuary with his court.”
Aislynn looked over her shoulder – was someone at the door? Her sister’s bold gesture was playing tricks on her nerves. “Nay, please, I’ve heard the Bruce is considerate, that he —”
“After Uncle Aymer kept that bastard’s wife and daughter captive for so long? Do you think he will have mercy for any de Valence?” She shook her head and yanked her arms away. “No, sister, there’s nothing for us here. Look.” Agnes jerked her head to the window. “The men are below. We can ride for England. But we must leave now.”
Agnes was always the impulsive, impetuous one, the tiny sister who got into trouble then looked to Aislynn to help her get out of it. While this time was no different, Aislynn was terrified she wouldn’t be able to do that. Here, under the command of the Scottish King, Aislynn knew there was little she could do to help either of them.
Then Aislynn did hear something on the other side of the door – the sound of heavy footfall on stone. Scotsmen were coming down the hall. Aislynn turned back to her sister, her eyes wide with fright and confusion. Indecision rooted her to her spot.
“Then you remain here,” Agnes told her. “You’ve made your choice, such as it is. Let them do with you what they will. I will return with King Edward’s army and find you.” Agnes lunged toward Aislynn in a quick move, kissing her cheek. “I love you, sister. Look for me to return for you.”
Then Agnes was gone, slipping over the windowsill, down a rope made from ripped sheeting the women had torn from the bed. Aislynn leaned out the window, eyes wide with terror as her sister worked her way down and leapt onto the waiting horses below. Two English soldiers, men loyal to Commander Aymer de Valence and the English cause, followed her, riding off into the slippery night. Aislynn sighed and unwrapped the cloth from the bedpost, letting the fabric drop to the dirt of the bailey. The door flung open with a crash, and Aislynn spun around.
“Ye must come with us,” the monstrous men in strange, skirted clothing commanded, stepping into her chamber. “The Bruce will see ye now.”
One man grabbed her arm and hauled her toward the door. The second man peered around the room, on the far side of the sturdy, four-poster bed.
“Where is the other one?” his guttural voice boomed.
Aislynn feigned ignorance, shrugged, and kept her mouth shut. While she may not agree with her sister’s actions, she wasn’t a traitor. They would have to beat the information out of her.
And as the Scotsmen dragged her toward the study at the far end of the castle, Aislynn paled, praying it wouldn’t come to that.