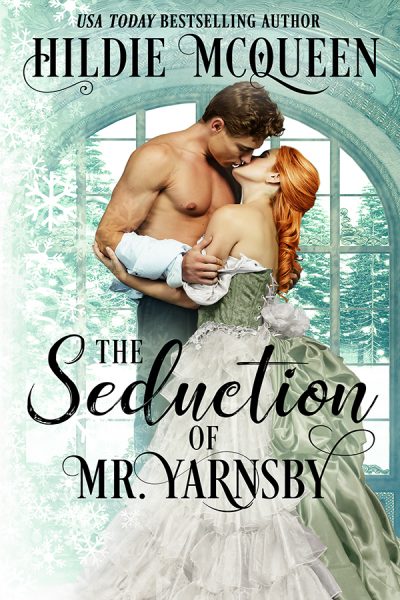 Alexander Yarnsby maintains his distance at social functions for a reason, his life is in turmoil and a woman in his life, would only complicate matters. It is maddening that he can’t help his preoccupation his Vivian Humphries and scares off any suitors. Until she can be his, she definitely will not belong to another.

USA Today Bestselling Author Hildie McQueen writes Medieval Scottish Romance, Regency, and American Historical Romance. If you like stories with a mixture of passion, drama and humor, you will love Hildie’s storytelling. Strong alpha heroes meet their match and fall in love every time in Hildie’s books.

Mr. Alexander Yarnsby, friend to a Viscount, showed up in the first book in this series, which was meant to be a stand alone. He was handsome, standoffish and scared off Vivian Humphries' suitors. I had to write, why he never declared himself, but at the same time was always showing up whenever Vivian was out in society.

After running into Yarnsby at the bakery, she’d thought of nothing else. He had indeed looked dashingly handsome. The cold hair had brought color to his cheeks, the windblown hair had made him seem dangerous. There was something about the man that made her lose her train of thought. It was most annoying.
“Why do you not admit to being attracted to him?” Penelope studied her and then looked to the dress. “That gown is ugly. You never wear it once you try it on. I am not sure what the dressmaker was thinking.”
“I am not in the least attracted to Mr. Yarnsby. He has been nothing by an annoyance. Why would I wish to be with someone that runs off anyone interested in suiting me and then does not declare himself. I believe he is playing a game.”
“You should play one back then,” Penelope quipped. Her younger sister’s eyes rounded, and a wide smile slowly creeped up until her entire face transformed. “I have an amazingly devilish idea.”
“What is it Pen,” Vivian asked as she pulled a different gown, this time a green one, from the wardrobe.”
“What if you seduce Mr. Yarnsby.”
Vivian spun. “Why on earth would I do that?”
Holding her hands out, Penelope made her hesitate. “Pretend to seduce him, string him along and then when he is about to fall, you waltz away. Give him a taste of his own medicine.”
“He has never tried to seduce me. Quite the opposite, acts as like some sort of strange protector.” She shook her head. “Like today when I went to visit the Connors. He followed me to the building.”
“No,” Penelope was enthralled now. “Did he go inside?”
“He did not.”
There was a rap on the door and her ladies’ maid, Mary entered. “A note for you Miss Vivian.”
“Is the messenger awaiting a reply?”
“No Miss, the messenger went off.”
The note was short and to the point.
“What is it?” Penelope attempted to read over her shoulder.
Vivian huffed. “An apology from Mr. Jameson for being so forward last night at dinner. And he informs me that he will not pursue any courtship with me.”
“Mr. Yarnsby,” they said in unison.