You are here: Products The Secrets of Dreams by Lisa Fox 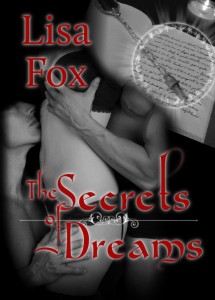 The Secrets of Dreams by Lisa Fox

Samhain is a night of great power and it is the only night that the twin demigods of dreams, Calen and Rist, can be summoned by a mortal sorceress.

Stephanie is skeptical, but the idea of calling the brothers inspires all kinds of wicked thoughts in her mind. She succumbs to the temptation and pours her deepest longings into the the chant, but can the twins fulfill her heart’s secret dreams?

Stephanie laughed as the current group of zombies, pirates and action heroes on her doorstep collected their treats in large, reflective orange bags. The moment the last candy bar was dropped, the children ran down her front steps, laughing wildly as they charged the next house on the block.
With an amused shake of her head, she closed the door behind them and then flopped back down on the couch. The bowl of chocolates remained on the table by the door, awaiting the next crop of ghastly and glamorous visitors. Soon, the little ones would be off to bed and all those leftover treats would somehow find their way into her stomach over the next few days. Stephanie loved Halloween, it was her most favorite holiday, but it was seriously hazardous to her hips.
She glanced at the clock on her mantel and was surprised to discover how late it was. It was almost time for her to shut off the porch light, lock the door and begin her solitary celebration. Her altar waited upstairs, adorned with candles and spices and incense, all ready for her to begin her annual Samhain rites.
Her eyes touched on the black grimoire sitting on top of her coffee table and a tingling shiver ran down her spine.
When her grandmother passed away a little over six months ago, Stephanie inherited everything: her grandmother’s house, her stock portfolio, and all of her old trinkets and bobbles and gems. She missed her grandmother fiercely and she had not been able to bring herself to go over to the old house for months. Then fall came, and the leaves changed, and it seemed to Stephanie that the time had finally come when she could deal with all the memories and grief and joy her grandmother’s possessions would inevitably evoke. She comforted herself with the knowledge that it was the perfect time to do it. The purpose of Samhain was to honor the dead after all and her grandmother deserved much honor.
Her eyes flicked once more to the grimoire and then quickly away.
Her grandmother taught her the ways of magic and helped her nurture her innate power. She told Stephanie about their proud heritage, about the long line of glorious witches she descended from. Her grandmother showed her the old ways, secret ways, ways that had been passed down through the generations. She learned the meaning of power and the consequences and responsibilities that went along with it. Her grandmother made sure she knew all of her lore and magic. Stephanie thought her grandmother taught her everything there was to know about her birthright, but then she found the grimoire in the attic and she wondered.
The ancient black book contained a whole lot more than the craft she had been taught. It was a dangerous book, filled with powerful love spells, curses and hexes, ways to access forbidden, arcane knowledge.
And one of those spells claimed to call forth gods.