You are here: Products The Secret History of Hatty Ha Ha … ends by S M Mala 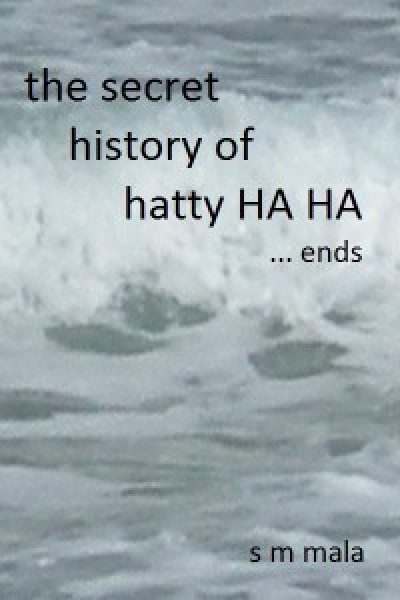 Each person is still trying to come to terms of what happened that fateful night when ‘Hurricane Hatty’ took beautiful Hatty away and the devastation and joy it made to their lives.

After six years, further unexpected twists and turns take place for Murray, Delores and Jake, each one carrying their own weight of guilt after Hatty was cruelly swept away… but was she?

Could that really have been the end of Hatty Ha Ha or is someone hiding a secret?

Life’s twists and turns continue in this tale of young and old love, desire and lust set against the backdrop of tropical heat.

Enemies show their real claws and secrets are eventually revealed which will bring great, life changing, joy for some and complete tragedy for others.

The mystery and sexually charged relationships continues until the secret life of Hatty Ha Ha … ends.

It’s a follow up to the first book. I wanted to round it all off… for the good and bad.

One
‘This is ridiculous,’ said Delores as Murray returned from London a week later. He was standing on the balcony to break his news. ‘You can’t just move away for a year!’
‘I need to,’ he said and she noticed he didn’t look upset but preoccupied in thought. ‘I’ll come over when I can but I need to do this and it may be longer. It all depends on the project.’
‘Murray what’s going on?’ she snapped and grabbed his arm. He turned to look her in the eye. There was something she couldn’t quite recognise as he smiled. ‘Is there someone else?’
‘Yes,’ he replied and her whole world stopped for a second. ‘But not in the way you think.’
‘Then why can’t I come with you?’
‘Because I need to do this on my own and Philip’s helping me.’
‘With what?’
‘It doesn’t concern you,’ he said and walked towards the bar, grabbing a ginger ale.
‘It does concern me when you’re just leaving like this!’ she said angrily. ‘And isn’t he with Gina? Living the high life in LA?’
‘That’s nothing to do with me,’ Murray shrugged. ‘My business can be handled from any part of the world and I’m going to London and then, I was thinking, maybe I could travel in Europe.’
‘Why are you doing this now?’ she said aghast, unable to understand what was going on.
‘I’m very fond of you but, you know as well as I do, things aren’t perfect and I want to do something for me, while I’m fit enough to do so.’
‘You’re screwing someone else, why don’t you just admit it!’ Delores snapped, her body starting to shake. ‘I know about the affairs, I have eyes and ears.’ She was met with a blank expression. ‘You have needs but don’t throw us away on some flight of fancy.’
‘That’s far from it.’
‘Do you expect me to wait for you? Am I allowed to visit?’
‘No,’ he said quietly and she noticed how he was staring at her. ‘I’m not telling anyone where I’m staying as I want some privacy.’
‘Not even Jake?’
‘Not even Jake,’ he said and for a moment she swore he looked guilty and this infuriated her even more.
As she woke the following morning, exhausted from her quarrelling and his irreverence on not joining in, Delores walked into his room.
Murray wasn’t there.
She knew this looked bad as she flung open the wardrobe and a majority of his clothes were missing.
‘That bastard!’ she snapped and ran down the stairs only to be met by Monica smiling brightly. ‘Where’s Mister Murray?’
‘He left a few hours ago,’ she said and started to tidy up some books.
‘Left?’
‘Yes, for the airport.’
Delores, incensed by his scheming behaviour realising it was his idea to sleep in separate bedrooms, ran to her room flinging on some clothes before heading out and driving away. Just as she was about to leave, one of the guards stopped her.
‘I’m in a rush,’ she said, near hysterical.
‘Mister Murray told me self to give to ya,’ he said and handed over an A5 envelope.
Delores knew Murray would suspect she’d follow him. Grabbing the letter she tore it open and read his note.
‘Call the office if you need anything else.’
Then she noticed the cheque and the amount of money.
He was paying her off after all these years.
‘So you’ve run away Dad?’ laughed Jake. He sat in his office and noticed a few new women walk past then caught Alexandra’s eye as she smiled. ‘That’s not very grown up is it?’
‘I just wanted you to know I won’t be at the island for a while. If you need me, all you have to do is call and I’ll come over.’
‘And where are you?’
‘In London working on a project with Philip,’ Murray replied and Jake could hear the tension in his voice. ‘I don’t want to say anything yet.’
‘Why London?’
Jake immediately knew his father’s connection to the place but he pushed the person’s name out of his head.
‘It’s the best place but it might change in a few months.’
‘Why for a year?’
‘If we’re very lucky it won’t take that long but I have to cover for all eventualities and this one will be costly.’
Again, Jake noticed the concern in his father’s voice, a slight tremble when he spoke.
‘Are you looking after yourself?’ he asked, wondering if his father was ill but wasn’t saying.
‘I am one hundred per cent fighting fit. You know I seem to see your wife more than you do,’ he laughed and immediately Jake knew that was a dig. ‘And Lucas.’
‘I’m busy and she’s doing her own thing,’ he said, knowing the marriage was crumbling but given Murray’s news, he omitted to tell him. ‘Don’t worry about me, I’ll be fine.’