You are here: Products The Secret About Time by Kathryn K. Murphy 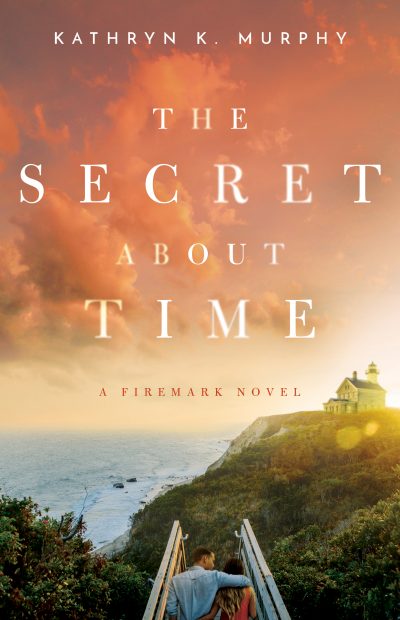 The Secret About Time by Kathryn K. Murphy

Austin Brooks is almost one hundred-years-old, but he, like all of the residents of Brightrock Island, doesn’t age normally. The tight-knit community off the coast of Massachusetts has a closely-guarded secret—they’ve discovered the fountain of youth. In an effort to escape his painful memories of World War II, Austin has settled into his job at Brightrock’s only school as the funny guy, Mr. Fix It, on track to becoming a principal. Then new teacher Caitlyn Landry arrives from the mainland, throwing all life on Brightrock—especially Austin’s—into chaos.

After suffering several major losses, Caitlyn is looking for a fresh start. Brightrock doesn’t take kindly to outsiders, but Caitlyn was a necessary hire, and when Austin is tasked with mentoring her, he discovers keeping his lips sealed is easier said than done. With her own regrets and mistakes haunting her, Caitlyn is hardly looking for love, but the more time she spends with Austin, the harder it is for either of them to keep their distance. But what no one on Brightrock knows is that someone is on to their secret, someone who poses a threat to everyone on the island, leaving Austin to decide between his loyalty to Brightrock and his desire to fight for the woman he can’t live without.

Before she was sneaking romance novels into her summer job, Kathryn K. Murphy grew up visiting family both in Cajun country and on the shores of Cape Cod. These days, she writes romance novels set in small towns, much like the ones she explored as a child. She teaches American history in Virginia, where she lives with her family and brood of cats, and blogs regularly at www.kathrynkmurphy.com.

Austin Brooks walked into the school’s old library, still wiping the dust from his hands.
“You wanted to see me, sir?” His voice echoed up to the vaulted ceiling, surpassing the tall bookshelves.
Principal John Clarkson and Laurie Michaels, the librarian, sat at the circulation desk looking at the screen of the brand new computer. Austin walked through patches of August sun, beaming through the floor-to-ceiling windows, which overlooked the oaks on the front lawn of Brightrock Island’s only school.
“You look like you’ve been busy,” Laurie said, peering at Austin over her red-rimmed glasses.
“Yeah, I had to squeeze another bookcase in the office from my classroom. Stole the spare from under the stage. So what’s up?” Austin eyed John. Following the chain of command was an old habit from his time in the Navy that had never let him down.
“I hired someone to fill Lizzy’s spot.”
“Hey, that’s great. Just in time with school starting next week. Who stepped up?”
The lines on John’s face seemed to deepen as he stared at Austin.
“We had to go with someone from off the island.”
Austin stopped dead. “You can’t be serious.”
John stared at him, his expression grave.
“I am.”
Austin felt his jaw go slack.
“How? Why?”
“Didn’t have a choice.”
“I could’ve—”
John held up his hand, silencing Austin, who ground his teeth in response.
“I looked at it from every possible angle. The new federal law requires we have someone certified in the new trauma informed care now. Can’t just be anyone, and they have to be physically present. The council wasn’t happy, but they approved the decision. The teacher we’ve hired—what’s her name again, Laurie?”
Laurie and John looked about the same age, hovering somewhere near retirement, but that’s what made hiring someone from the mainland a problem. At almost three hundred and seventy years old, John had been around longer than most of the buildings on their small, New England island. People who lived on Brightrock didn’t age like they were supposed to, and hiring an outsider had never happened before.
Laurie jiggled the mouse and peered at the screen again. “Caitlyn Landry.”
“Right, Caitlyn meets the requirements, has a great resume, and no surviving family. Laurie researched her—”
“Googled, John.”
“Thank you, Laurie. Googled her. Looks like the parents are both dead, no siblings.”
Austin folded his arms and narrowed his eyes, even though he knew he shouldn’t.
“So, how can this work? What if she…” Austin waved one hand around in the air, “you know, finds out about us?”
“That’s where you come in.” John leveled a sharp gaze at Austin.
Austin was about to ask why him, when Laurie brought up exactly what he didn’t want to remember.
“You’re the one with the most experience with outsiders,” Laurie said.
Austin swallowed and itched to pop a knuckle, but crossed his arms in front of him. “That was a long time ago.” Not to mention how badly it had ended.
“None of us have been in close contact with the outsiders as long as you were. Sailing around on a ship for four years in God knows where makes you the best bet.”
Austin shifted his weight, but still couldn’t get comfortable. “You can’t expect me to cover for everyone.”
“None of the students know until just before graduation,” Laurie said, looking over the circulation desk while taking off her glasses. “We’re pretty good at keeping secrets. You’ll just be a little insurance.”
“There’s no way an adult can live on the island for an entire school year and not find out,” Austin said, shaking his head.
“Well, I’m going to need you to make sure of that. Don’t let her get too nosy.” John pulled a Mont Blanc pen from his suit jacket and spun it on the lemon-waxed polished wood.
Austin propped his hands on his hips. “What about renewals? How am I supposed to explain when everyone disappears to a secret meeting?”
John didn’t meet his eyes, still focused on the spinning pen. “It’s done. I’ve already sent her a contract. She signed. Besides, she’s arriving on the next ferry. I need you to go pick her up and take her to her apartment.”
“Wait, she has an apartment?”
“Lizzy agreed to rent her space out. Car too. Here're the keys.” Laurie held her hand out, dangling the little cluster for him to take. Austin recognized his cousin’s apartment, classroom, and car key on a keyring decorated with a scoop of pink ice cream on a cone. He could’ve throttled Lizzy for leaving, even though everyone knew she’d been asking for a chance to get away for years, but the sooner she got her certification, the sooner Caitlyn Landry could leave. With no choice, Austin took the keys and shoved them in his pocket.
“John, I don’t like this. I don’t see anything good coming of it.”
John sucked in a breath and stood, pocketing the pen as he did.
“We’re counting on you.”
Austin felt like a trap had closed in on him. He never talked about what had happened in the Navy, but of course FDR’s fireside chats and NBC gave everyone a basic idea of America’s fight against the Japanese. Maybe if they knew the details they would reconsider. Looking down at the keys in his palm, he felt like his plan to avoid everyone from off the island was slipping away. “I’m not sure I’m the right person for this.”
“Austin, you look close to her age.”
“I’m turning one hundred.”
John nodded and spoke slowly, in a patronizing tone that made Austin run. He ground his molars instead.
“I know, but you look her age. She’ll relate to you.”
Austin shook his head. “I don’t know about that.”

Be the first to review “The Secret About Time by Kathryn K. Murphy” Cancel reply