You are here: Products The Scotsman’s Daughters by Sara Jessica Marquette 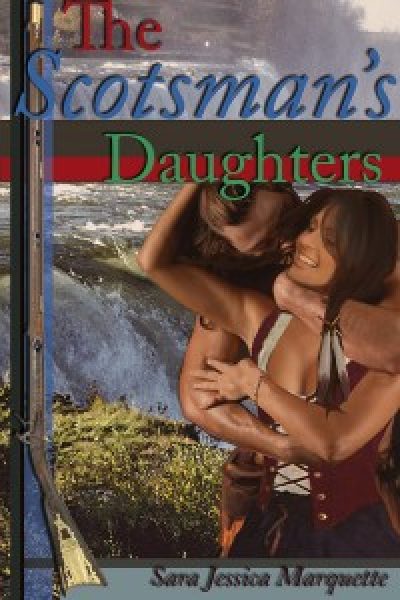 In the midst of the chaotic French and Indian War, spirited sisters Cait and Elise McCallum hazard a journey from their privileged lives in New York City to visit their father, Colonel Brody McCallum, commander of a British fort. On the edge of the lawless American frontier, a chance meeting at a Mohawk rendezvous introduces the sisters to two bold and handsome scouts: frontier legends Falcon Cardigan and his friend, the noble savage Kaga. The warmth of their kindling attraction ends abruptly when a treacherous Indian scout betrays and kidnaps the sisters, and a fast-moving tale of flight and pursuit begins.

Cait and Elise must survive the perils of Indian captivity and trial in the wilderness, and Falcon and Kaga must risk all for the women they prize and desire; trusting their hearts, not just their heads, to gain the sister’s freedom and win their love.

The Scotsman’s Daughters is a page-turning sweeping revision and adaptation of James Fenimore Cooper’s classic novel, ‘Last of The Mohicans’. Select colorful pieces of fabric from Mr. Cooper’s original are re-imagined and combined with new material and characters to create a romantic adventure story of passionate love, devotion, and triumphant nobility of character. Set against the unspoiled wilderness beauty of colonial America, The Scotsman’s Daughters is sure to entertain and delight modern readers.

Sara Jessica Marquette was born in Greensboro, North Carolina, attended High School in Indiana and graduated from Indiana University. She enjoys writing in a number of different genres, particularly Romance, Erotica, New Adult and Young Adult. Her interests include travel, art, photography, history, horseback riding, and sailing. These interests often serve as backdrop for her novels.

The inspiration for this novel came from ‘Last of the Mohicans’, which is a wonderful story, but o my! There is a great deal of ‘romantic’ imagery in ‘Mohicans’ but very little ROMANCE – unless it’s a bro-mance! Backward run the sentences, and passive voice and peculiar observations run through the story – its almost 200 years old! But so much of it is wonderful and worth reintroducing to modern tastes, that the project grew on me – like restoring a fine old mansion with good bones, but crumbling plaster and flaking paint and in need of bathrooms! So I selected and refurbished the fine pieces and fashioned entirely new scenes and substantial narrative to create a new story that stays true to the best of the original while not being slavishly concerned with the original. 100,000 words were tossed out and 25,000 new ones added in new scenes and situations. I think The Scotsman’s Daughters is a tight intense delicious read at 45,000 words. ‘Mohicans’ weighed in at 150,000!

Hundreds of natives arranged themselves loosely around the casual perimeter of the green meadow outside Fort Lancaster the next morning. The lacrosse field rolled away for several hundred yards of mostly level ground; the expanse showcased opposing goals constructed of two raised poles with a cross beam eight feet above the ground. The Mohawk women prepared feasts of fish, geese, ducks, deer, bear, elk, moose, rabbits, and squirrels; filling plates with freshly fired game, laying these out in abundance, in honor of the newly arrived visitors. Cait and Elise sampled delicious broiled salmon and venison steaks from among the many appetizing odors filling the smoky air. Major Heath and Lieutenant Cooper closely accompanied the sisters.
“The Indian men are naked,” Elise whispered to Cait; “and truly impressive!”
“They are not naked, Elise,” Cait scolded; “their manly parts are covered, for the greater part, anyway. Without the benefit of our finer Christian natures, they conduct themselves in the manner of heathens. You are not to speak of any of their differences to anyone but me, and that in private confidence; we must avoid giving any offense. When we’ve shown ourselves, and after briefly eating our meal, we will retire to the fort.”
“I think I should like to stay,” Elise insisted; “look at all the majestic men racing around; we’ll never see anything like it again, ever, in our lives.”
Elise approached Ethan to educate her untrained eye in following the sport’s chaotic action.
“Where is the ball General Boyd spoke of?” she asked.
“Do you see the savage running full speed towards the far posts?” Ethan asked, and Elise nodded. “He’s carrying the ball in the net at the end of his stick. He wants to throw the ball between the posts and score a goal for his village. If the opposing side is stopping him, as they are now, he tosses the ball towards another man on his own side to catch the ball and continue the race. That’s all there is to it, anything goes.”
Elise watched spellbound as the sweating warriors pursued the ball handler in maddened groups, striking his uplifted stick and darting frame. The handler went down and twenty braves converged on his misfortune, beating him senseless. An opposing player scooped the ball when it popped from the jumbled bodies and raced in the opposite direction, towards Elise and Cait. This swift runner bolted powerfully away from the crowd, racing into Elise’s view, curling his stick with his wrists, swinging the ball in his net back and forth as he ran. The Indian’s graceful and unrestrained flight reminded her of an agile deer bounding through a deep woods, a singular and impressive creation of nature. He dashed by her, his eyes penetrating hers deeply, filling her spirit with his nobility and intensity; there was no concealment to his dark, glancing, fearless eye, alike terrible and calm; the bold outline of his proud nose and lips, pure in their native red; his proud head, bared to the generous tuft of black hair flowing from his crown. The young warrior’s wild expression captured her soul, and she felt a warmth shudder through her being. Elise gazed at his free air and proud carriage as he raced past, as if she was looking at a precious Grecian statue miraculously come to life and given wings on his feet.
“He is without blemish,” Elise murmured unconsciously. “He is splendid.”