You are here: Products The Score by P.M. Fox 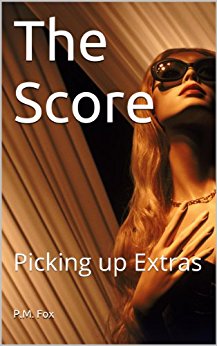 The Score by P.M. Fox

A drug dealer stops by his distributor's on a Friday night for his weekend stash and gets invited into a three-way with the other guy's hot girlfriend.

P.M Fox studied Creative Writing at the University of Minnesota, writing in several genres including fiction, screenplays and memoir.

Being in an erotica writer’s group in Los Angeles, CA.

I hate going over to Jake’s house even though he sells the best pot and coke in town. His girlfriend, Daisy, makes me uncomfortable. She’s fucking hot with an ass that hugs a mini-skirt perfectly and she always wears tank tops without a bra, her nipples constantly erect. Her mouth, perfectly shaped with luscious lips. Whenever I see her, I have wet dreams about her for a week, fucking her sweet snatch in every position my unconscious and conscious mind can imagine. I know she has a great pussy because he won’t stop talking about it, “It’s the tightest I have ever felt, man!”
Well, it’s Friday afternoon and my cell has been ringing off the hook, people ready to party for the weekend. This is the day that sustains my entire week. I walked up to the door and I heard them in the middle of a loud argument.
He said, “I can’t believe you fucked him.”
She responded, “Why not? You never fuck me like I want anymore.”
Suddenly their voices lower so I can’t hear what’s said. My cellphone rang, as I stood outside, I forgot to turn it off. The door flew open, he looked flustered. I offered, “I can come back, man.”
“Nah. Let’s do it.” He stepped aside and I made my way in, Daisy stood in the living room wearing a short green skirt and a black tank top. The top looked like it had a cum stain on it. My cock instantly sprung. Her eyes roved over my decent sized biceps. Jake started weighing and bagging dope, asking, “The usual?” I nodded, swallowing as her ice-blue eyes burn through my skin, yet somehow I broke out in goose bumps. She was a Greek Goddess adorned with silver bracelets jingling on her thin wrists.
“Maybe add an ounce of weed to the usual order. I’ve been getting a lot of calls.” He nodded at my request.
Daisy touched Jake’s shoulder but he pushed her hand away. “I can’t believe you fucked that guy,” he said angrily. She was an oracle, maybe. I sensed she was able to drink up everything that happened around her. Nothing occurred that she was unprepared for, she even seemed to will into existence her boyfriend’s forgiveness for her wandering eye and cunt.
Licking her lips, she said. “I was lonely, you’re never here, babe.” She touched his neck; he didn’t push her away again as she continued to lightly caress him. Jake sighed as he turned to her, kissing her lightly on the lips.

Be the first to review “The Score by P.M. Fox” Cancel reply