You are here: Products The Science of Attraction by Verity Jacobs 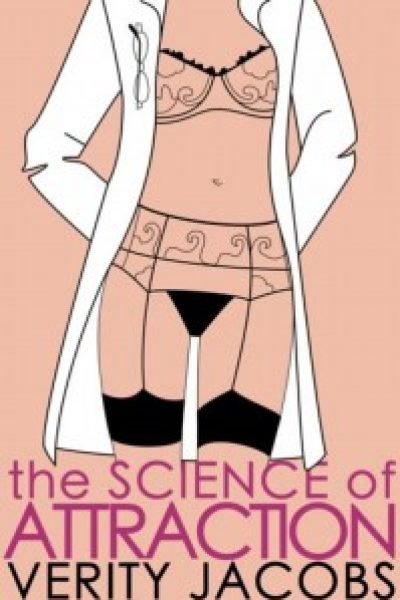 The Science of Attraction by Verity Jacobs

Kate Ramsey is at the top of her game.

She’s the hot new recruit at the most prestigious research institute in Germany, and she’s determined to live up to the hype — even if it means working day and night. Stress relief comes in the form of a no-nonsense affair with her neighbor, who also happens to be the director of the institute. Who says sex should be anything more than a contract between two people who have other things on their mind?

So when Tom Baker saunters into her life, Kate is understandably upset to see this well-oiled machine splutter and seize. Tom is young and smart, and far too pretty for his own good. Kate can’t help but be drawn to him, even if giving in to the attraction would mean risking everything she’s worked for.

Book 1 in the Expats series.

Verity Jacobs is a reformed scientist, who left the lab when she fell in love with writing about love. She lives with her husband and baby girl in London, where she dreams by day and writes all night long. She is addicted to the heart flutters and stomach flips of the fictional romance world.

“So, what are we drinking to?” Tek asked, flopping down on the remaining chair.
“Well, I’m drinking to beautiful women and summer sun.” Tom grinned and held his bottle aloft, leaning back and catching my eye again.
“I’m drinking to five days away from the bench,” Margot added wryly.
“I’m drinking to being near the freakin’ water again, even if it’s just a pebbly old sea,” Tek said, his Antipodean beach snobbery shining through.
“And I’m drinking to keeping you all out of trouble,” I said, raising an eyebrow.
“Now why would you want to do a thing like that?” Tom said, winking as he clinked his bottle against my glass.
“Because you obviously need it,” I shot back, looking over at him and instinctively, foolishly, holding his gaze.
“Do I?” he said, his voice low. It took me a second to realize that Tek and Margot had started up their own conversation. I was well and truly trapped in a Tom bubble.
I took a breath and somehow managed to tear my eyes away from his, shifting my focus downward. But of course, that was no better.
“Where did you get this?” I asked, reaching out without thinking to stroke the scar that stretched across the width of his forearm.
“Mountain biking with my brother,” he said softly. And then, “It looked a lot more impressive when I was eleven.”
I smiled and rubbed my fingertip back across the white stripe, ignoring the voice in my head that was telling me not to. It was soft and indistinct anyway, garbled no doubt by half a bottle of wine.
“It still feels a little funny to the touch,” he continued, “especially when you— Ah!”
His gasp shot straight through me, and I realized with a start that I was grazing the surface of his skin with my nails in a slow caress.
“—do that,” he finished, and somehow I couldn’t help but look up again.
Big mistake.
“It feels kinda great,” he said, “but it also drives me nuts.”
There was something about this statement that stripped all previous conversation of its innocence. Something about the pairing of pleasure and pain that left me short of breath.
“You have a brother?” I said faintly, reining in my hand and blinking a couple of times in a vain attempt to reset my head.
“Yeah, I do,” he said. “He’s a year older, we’re pretty close.” He took a swig of beer and smiled sidelong at me, a smile that seemed designed to absolve my sins, even as it inspired new ones.