You are here: Products The Runaway Roommate by C.S. Mae 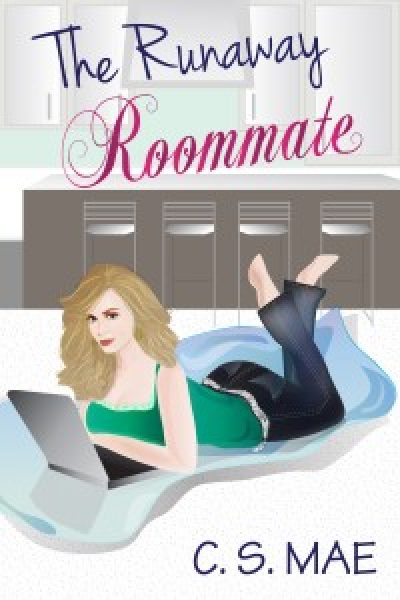 The Runaway Roommate by C.S. Mae

Casey Peters has a problem and that problem is the half-Korean hottie that moved in when her former roommate moved out.

Now her life has become like an episode from one of her favorite dramas, complete with: crazy exes, roommate shenanigans and confusing plot twists.

This story is a Naughty Niblet: the perfect amount of sexy to satisfy, but not make your hips big.

C.S. Mae is only in front of a computer when she’s writing. She’s hopelessly backward, socially awkward, and mostly hides with a book in front of the fire, fighting for space in her favorite chair with her two cats. Romance novels are her first love, Kdramas are a close second.

Well, there’s a confession I have to make. I’m a Korean Drama addict. (If you’ve never watched a Korean Drama and you don’t mind reading subtitles, I highly recommend them.) But all my family and friends think I’m crazy and obsessed. And I have no one to share my obsession with. So I decided to write a four book series based on common Kdrama plotlines. And man, it was so much fun!

I was just leaving the house the next morning—late, when I heard the door open behind me.
“Good morning!” David’s smile was a thing of beauty and it took my breath away.
“Uh…”
“Surprised to see me?” He was so cheeky about it, sneaking out after me. I laughed.
“A little. We haven’t really run together lately, have we?”
“No time like the present,” he said and led the way.
I followed slowly, cursing Richard for last night and David for this morning. Would I ever have a moment’s peace?
“You’ve been working a lot of hours lately,” said David after a long while. I had initially breathed a sigh of relief when he didn’t seem like he wanted to talk, but it turned out he was just biding his time.
“Yup,” was all I said.
“Work must be really busy right now. Your big project must be taking up a lot of time.”
“Well, you know, I don’t want Richard to take it away from me. It’s mine. I earned it.”
He nodded.
“I was thinking,” he said. “I know you’re running a lot earlier these days. On nights when I have an event I won’t be able to join you, but I could go with you on the other days. Like we used to.”
I didn’t know what to say. I couldn’t say no, because then I’d have to explain why. I didn’t want to say yes, either, because I needed to keep my distance and sort this whole mess out.
“Ah ha! There it is!” said David. He stopped in his tracks and pointed at me.
“What?” I said, looking down and around to see what he was talking about.
He moved into my personal space until we were almost bumping chests. I squeaked out, “What?” again.
“You’re avoiding me! I knew I wasn’t going crazy.”
“Don’t be silly,” I said, then turned and started jogging forward again.
“Oh, no you don’t,” he said, and blocked my path. I started to go around him, but he grabbed me by the upper arms and held me in place. I refused to look him in the eye, but he ducked his head down and locked his gaze with mine. “What’s going on, Casey? Did I offend you or something when we talked about Richard?”
“No, of course not!” I said, and then kicked myself for not grabbing on to the obvious and easy excuse.
“Then, what is it? Why don’t you want to be around me anymore?”
I started to speak, but I didn’t have any words, so I stopped. I tried again, but sighed instead.
Finally, I shoved his arms away. “I don’t want to talk about it. It’s nothing you’ve done, I’m going through some stuff right now, and being around you reminds me of that. I just need some space.”
I ran ahead of him, but he was there the entire time, following me.
Chapter 15. The Wide-Eyed Kiss
“What is with her expression? You’d think she didn’t know what a kiss is!”
“What do you think he’s leaning in for, silly?”
“Close your eyes and enjoy it, girl!”
When we got back to the house, I ran into the kitchen without pausing to take off my shoes like I usually do. I pulled a glass from the cupboard and filled it with icy water from the fridge, resisting the urge to douse myself in it. I just needed one moment to gather my thoughts.
“Hey, can I get one of those?” I heard the cupboard open and close and David set a glass on the counter next to me, sliding an arm alongside mine. I took a sip from my glass, gulping nervously as I realized he was now mere inches away. David’s left arm reached around my other side as he took the pitcher in that hand to pour his own water. I was now, literally, caged in his arms.
I set my glass down and turned, but he wasn’t moving. I tried to smile and move past him, but he didn’t budge. I felt a prick of heat at the base of my neck when I realized how close his body was to mine.
David was smiling. He looked like a cat who’d found the cream stash. With an arm placed on either side of me where I leaned up against the counter, he paused to stare into my eyes.
Like a Kdrama flashback, I remembered that feeling I’d had when he helped me up on the steps. The world paused; I was lost in his gaze. He leaned forward and I closed my eyes.
I felt the smallest whisper of a kiss. His lips pressed against mine and moved away. I held my breath. David’s lips moved against mine again, then away, as though he was tasting them. Then again, but a little longer this time.
My whole body seemed to melt in on itself and I moved forward, pressing kiss for kiss. Meanwhile, David’s arms wrapped around me, settling against my back, fingers spread so I could feel their heat, pulling me toward him. Our heads tilted as the kiss deepened.
My body flushed with a rushing warmth that seemed to pour through my stomach, up into my neck and cheeks. I felt like I was burning up and a moan escaped me.
His mouth opened over mine and I received his tongue with a gentle suck. He made a noise deep in his throat and our tongues wrapped around each other, dancing and stabbing. David’s hands slipped down my back and to the hem of my tank top, where they hovered before moving underneath and against the skin of my waist.
My own hands were around his back and grabbing on to him as though I would fall if he wasn’t helping to hold me up. I gasped as he pulled away, my lips still slightly open, eyes wide.
David smiled again. “I knew it,” he said and my gut clenched.

Be the first to review “The Runaway Roommate by C.S. Mae” Cancel reply