You are here: Products The Roommate by Erica Storm 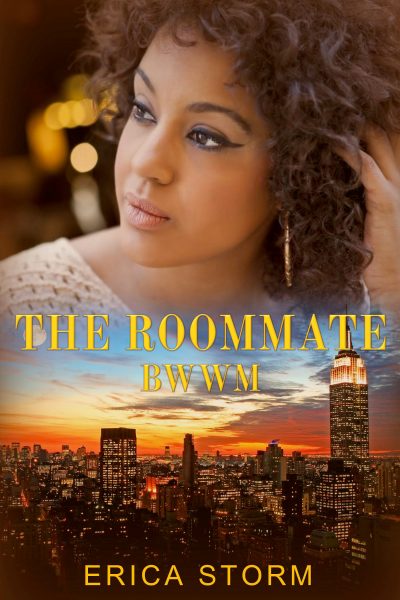 The Roommate by Erica Storm

All Sabrina Johnson wanted was to rent out an extra room to pay her ever increasing rent.
“I did all the right things and still I got the roommate from hell.
How could a man with a body to die for, and a face that I would kill for, be given to one man? Long silky lashes covering deep blue eyes, dark curly hair, sexy cool hoarse voice, six feet and dresses in suits that cost more than my rent every month, which happens to be outrageous for a small two bedroom apartment in the city with one bath.
One bath and I have to share it with that absolutely handsome, absolutely sexy, and absolutely infuriating man.”

I am an author with over fifty interracial books to my credit. I write bwwm interracial romance because I have many stories and life experiences in that genre. Erica Storm is a pen name and I write paranormal romance under another name as well as across different genres because I enjoy experimenting and writing what I love.

I began writing because I had lived in New York for a number of years and interacted with the artist community. However, I had been reading and writing voraciously before then.<br />
This book was inspired by the housing situation in New York that I experienced and from personal relationships.

Chapter 1<br />
Sabrina</p>
<p>It’s difficult going to school every day and then having to work at night just to pay the rent in a city like Manhattan. I was living in Brooklyn with my sister and after I thought it was better to commute to work and school, I came up with the bright idea that we could save money by moving from Brooklyn to Manhattan.<br />
Boy was that a fucked up idea.<br />
We did move but it didn’t work out the way I planned. We were two sisters who didn’t have regular boyfriends and I figured we had at least two years in the apartment where I could finish college and she could move up in a better paying position as a manager slash salesperson. She was good at being a manager but she sucked at being a saleswoman and was sent to Brooklyn in one of those banks that got robbed regularly.<br />
Now I’m left with a rent increase and no way to pay it. I could see my ass on the street in a month or less. Every time I get home there is a letter from the landlord under the door.<br />
I guess I didn’t read the fine print on the lease. Just as I was getting off the elevator, I ran into the manager of the building.<br />
“Miss Johnson.” I kept walking. “Miss Sabrina Johnson, I need to speak to you.”<br />
I turned to this man dressed all in black and said, “Lo Siento. No hablo English.” And I kept walking and he continued walking behind me.<br />
“You are Miss Johnson?” Since he wasn’t sure, I ignored him as I neared my door. “With a name like Johnson you can’t be Spanish?” He said loud.<br />
That infuriated me more, and I forgot that I wasn’t Spanish and remembered that I was a Black woman being harassed by a man I didn’t recognize and about a bill I couldn’t pay. My eyes narrowed and my face tightened. “Why are you hounding me?” I said hoping that would scare him away. “My rent isn’t due for another month.”<br />
“I wanted to make sure you signed the increase in rent.” I snatched the paper from his hands.<br />
Pulling the pen from his hand, I scribbled Sabrina Johnson and stuck it in his face. “Now are you satisfied?” He snatched it from me and turned without saying a word and got on the elevator.<br />
Before he closed the door, he turned to me and said, “If you don’t pay your rent, you will be the first I evict.”<br />
I had forgotten the adage, “you can catch more flies with honey,” my sister would say. Well fuck the flies and fuck the honey. I’m dying here with that rent she’s left me with all because she can’t keep her panties up and she has to let some no account man fool her and she abandons me for him.<br />
Opening my door, I felt sorry for myself. I sulked during dinner and trying to study for my finals. “Fuck this. I can’t study with that shit looming over my head,” I murmured. “Who the fuck can study,” I mumbled and I tossed the book across the room and broke my favorite lamp.<br />
The shit was hitting the fan and it was getting to me. I didn’t take into consideration that my sister would lose her job and at the same time meet some lowlife and move in with him in Brooklyn with sensible rent that two could pay if both had jobs.<br />
Because she is my older sister, I didn’t have the heart to tell her that she shouldn’t put all her eggs in one basket and sooner or later she would be back with me if I could hold the apartment long enough, which is becoming less likely every day that I there would be an apartment to go back to.<br />
You just don’t tell your older sister about a man she’s crazy about all because he probably did some unspeakable stuff to her to make her go crazy after him. Especially if she can’t see it for herself. You expect her to know better. But my sister never knew shit because if she did she would have seen him coming.