You are here: Products The Road to Alexander by Jennifer Macaire 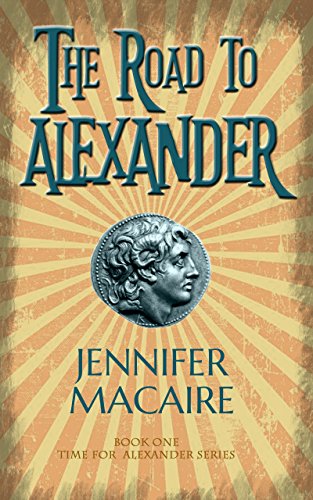 The Road to Alexander by Jennifer Macaire

What do you do when the past becomes your future?

The year is 2089, and time-travelling journalist Ashley Riveraine gets a once in a lifetime opportunity to interview her childhood hero, Alexander the Great. She expects to come out with an award-winning article, but doesn’t count on Fate intervening.

Alexander mistakes Ashley for Persephone, goddess of the dead, and kidnaps her, stranding her in his own time. Being stuck 3000 years in the past with the man of her dreams wouldn’t be so bad if the scientists of the Time Institute hadn’t threatened to erase Ashley from existence if she changes history.

Ashley must now walk a tightrope, caught up in the cataclysmic events of the time, knowing what the future holds for the people she comes to love but powerless to do anything to influence it.

Join Ashley on her hilarious, bumpy journey into the past as she discovers where her place in history truly is…

Jennifer Macaire is an American living in Paris. She likes to read, eat chocolate, and plays a mean game of golf. She grew up in upstate New York, Samoa, and the Virgin Islands. She graduated from St Peter and Paul High School in St Thomas and moved to NYC where she modelled for five years for Elite. She went to France and met her husband at the polo club. All that is true. But she mostly likes to make up stories.

It started out as a short story – I had been writing and selling short stories to magazines, and I just had an idea of a sort of alternate history short story where Alexander the Great is never bitten by the mosquito that caused his fatal malaria. I wrote it from the viewpoint of a woman time-traveler/journalist, but when I came to the part where she slaps the mosquito away…I just kept going. In fact, I kept going for seven novels which became the Time for Alexander series. In the first book, “The Road to Alexander”, I even left the part about the mosquito, and you can catch it if you're paying attention although it's no longer important to the plot. I ended up shifting everything around, because he dies in Babylon and I needed to introduce the time-traveling character at the beginning of his great adventure.

"Ashley." Alexander took my hand and held it gingerly. "Everyone learns about nymphs and dryads from their parents in our world. Everyone knows about the naiads, sprites, sylphs, oreads, undines, fauns, and fates. Do you know who Lachesis is?" I shook my head. "Clotho? No? Atropos? The Muses? Do you know anything?" He sounded as if he were in real pain.
I looked at Plexis. He was staring at me, and on his face was the strangest expression. I tried to laugh but the sound stuck in my throat. "I'm sorry," I whispered, "I didn't learn about any of that."
"But you said you went to school. You had teachers, you knew about Plato and Homer, you even spoke to Aristotle about the world being round. And that's a new idea." He shook his head. "I just don't understand."
"I'm sorry." I blinked. I wasn't used to anyone paying so much attention to me. It was unnerving. "I don't know what to say."
"But where were you educated?" Alexander asked me. "Even the barbarians know about dryads!"
"I can't tell you," I said, shaking my head.
"Why not? I just don't understand you, Ashley." There was such pain in his voice that I felt awful.
"I'm sorry," I whispered, "but I can't."
"Perhaps it's just as well you don't say anything," said Plexis. "This is what the oracle meant, wasn't it? I'll find out on my deathbed, after we've reached the sacred river and after I've seen the twelve pillars."
"What's that?" Alexander said, attentive.
"An oracle's riddle." Plexis shrugged. "I don't know where the sacred river is, perhaps in Indus, I heard of one that flowed there. But I know not where the twelve pillars are."
I stared at Plexis, he looked at me and then his face softened. He smiled. "Don't cry. Why, thanks to you I'm probably the only person in the whole world to look forward to my own death."
"Don't say that." Shivering, Alexander put his hand across Plexis's mouth.
Plexis took it and kissed it, drawing it across his cheek. He looked at it a moment, turned it over, and traced a faint scar on the thumb. Their fingers entwined. Then Plexis placed Alexander's hand on my leg. "You're going to have your hands full teaching your wife everything she needs to know before we get back to civilization," he said in a light voice.
Alexander didn't say anything, but I felt his sorrow keenly.
"Is it because of me?" I asked Plexis.
He shook his head, mute.
"I won't stand in your way," I said to Alexander. "If you love him I won't stand in your way."
"There's nothing in our way," said Alexander quietly, "except ourselves." His fey eyes were filled with something like joy.
Plexis shook his head. "Ah, Iskander. There was never anything between us except friendship. Cxious tried to change all that, but you were right all along. Sometimes the difference between love and need is as thin and transparent as spring ice."
"And the difference between love and need is like the difference between ice and water." Alexander spoke automatically.
"I see you haven't forgotten your lessons." Plexis smiled. "Aristotle should be proud."
"No, I never forget my lessons," he said.
"May the gods hear you." Plexis winced as he levered himself from the ground. "I think I'll go find Usse and beg some of his sleeping draught. My shoulder pains me. Perhaps I was hasty, moving about so soon." He turned and left, but not before I saw something shine on his cheeks.
"Oh Alex," I said, laying my head on his chest. "I'm so sorry."
"Don't be." His heartbeat was slow and regular. "I have all I need."
"And what about what you want?" I asked.
"You asked me that question long ago, if I remember well. It's easy to answer. I want to find my son. I want to avenge Darius. And I want to make Alexandria the most beautiful city on earth. I want to grow old with you by my side, our children playing at our feet. I want the stars and the moon." He paused and kissed my nose. "I want to rule the world and the heavens. So, tell me. Tell me, my oracle, my love. Will I get what I want?"
I gave him the sweetest smile I could muster, and I said, "Alex, you're standing on thin ice."
He sputtered, then laughed. "I would be married to the only oracle in the world with a sense of humor."