You are here: Products The Road Home by Krista Sandor 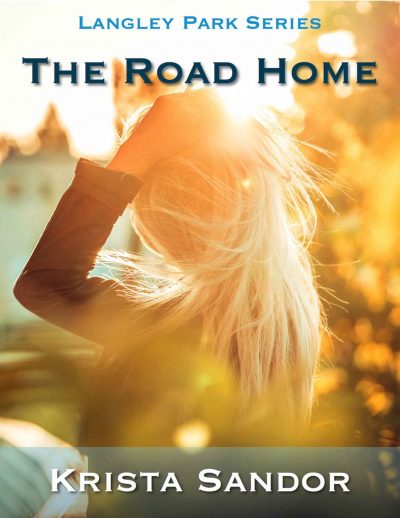 The Road Home by Krista Sandor

You can outrun a lot of things. The truth isn’t one of them.
Jenna Lewis has spent the last fourteen years lying about her past, but all that changes when a family emergency calls her back to the quaint town of Langley Park. Her plan is to get in and get out as quickly as possible, but things become complicated when she encounters her lost childhood love who is struggling with his own demons. While neither wants to admit their connection is still lightning-hot, the intensity of their attraction is too strong to deny. But not everything is as it seems. Unsettling events begin to occur, threatening not only Jenna’s second chance at love but her very life. Will she survive what lies ahead? Can her heart navigate The Road Home?
The Road Home is a sexy standalone romance in the Langley Park series.

Krista Sandor is the author of The Road Home, the first stand-alone book in the Langley Park series which readers have dubbed “heart-tugging” and containing “palpable love and pain.” Nearly a jack-of-all-trades, Krista has worked as an aerobics instructor, an elementary school teacher, and even a swimsuit calendar model. A self-described sparkling water addict, she now spends her days writing in local coffee shops and people watching in her adopted home of Denver, Colorado.

My romance writing career has a unique origin.

I've worked as an aerobics instructor, an elementary school teacher, and even a swimsuit calendar model. But it was Multiple Sclerosis that brought me to romance.

Yep, you read that right. MS.

Right after my diagnosis, a friend gave me the book Manwhore by Katy Evans.

She told me, "This is what you need right now."

She was absolutely right.

From that moment on, I was hooked.

Authors Christina Lauren, Pamela Clare, Alice Clayton, and Emma Chase, just to name a few, introduced me to strong heroines and sexy alphas. They made me laugh. They made me cry. And, they made me blush more than a few times.

But my favorite thing about romance is the happily ever after. I love knowing that, whatever challenges the characters face, they'll always come out stronger.

A year after my diagnosis, I decided to put pen to paper and started writing my own romance series.

I'm happy to report, I'm doing great. I’m blessed to still be able to run five miles a day and keep up with my growing boys. And, I get to spend my days crafting happy endings for my characters in the Langley Park series.

He cradled her face in his hands. They were just the right amount of rough, and Jenna’s nipples tightened in response to his touch. Her vision adjusted to the dim light of the hall, and she looked into his eyes and recognized the need and longing she was sure he saw mirrored back in her own.

“The only thing I want right now is you,” Ben said, then kissed her like she made up the entirety of his universe.

She kissed him back, sighing into his mouth as he moved one hand into her hair while the other skimmed the hem of her t-shirt. He walked her backward, kissing and caressing her until her body pressed up against his bedroom door. She was warm and soft against his sharp angles. He kissed her earlobe, and her gasps and soft moans fed his growing desire.

Jenna’s thoughts seesawed wildly between wanting Ben, wanting a life with him, but knowing it wasn’t possible. She didn’t want to hurt him. But she was falling for him and for the life he shared with his daughter.

It couldn’t be real, could it? Liars didn’t deserve all this.

But just as the soundtrack of second-guessing and self-loathing nearly became too much for her to bear, Ben whispered her name, like a prayer hot and heavy in her ear, forcing her mind to focus solely on him.

“I have wanted this for a lifetime,” he continued, taking her earlobe between his teeth.

She was desperate for him to be closer, for his kisses to be deeper. She wanted to memorize each touch, each brush of skin on skin. Reaching under his shirt, Jenna let her hands explore the expanse of his back, feeling his taut muscles flex beneath her fingers.

She felt her way down, inch by glorious inch, to the waistband of his pants. The heat between her legs was growing to a near inferno as his male scent fed her desire. Jenna twisted her fingers into the fabric of his pants. Ben responded by cupping her ass and lifted her up and against the door. He pressed the heat of his erection into her core, and her legs wrapped around his torso, bringing them eye to eye.

Jenna brought her hands to Ben’s face and forced herself to pull away from his kiss. She had to make him understand her time here was only temporary. She had to give him the choice to stop and walk away before things went too far. “I don’t know if we should be doing this. There’s so much you don’t know, and I’ll be leaving as soon as…”

But she couldn’t go on.

Ben observed hungrily as she bit her bottom lip. Then he tore his eyes away from her mouth and met her gaze so completely time seemed to stand still. He watched as her eyes filled with desire, betraying her words and telling him she wanted this. She wanted him.

His voice was thick and low as he leaned forward, his lips pressing a whisper of a kiss to the corner of her mouth. “I don’t want to talk about how long you’re here or when you’re leaving,” he said, then licked a hot trail along her jawline. “I want you for as long as I can have you.”

His mouth descended on hers with a desperate growl, and he kissed her with the intensity of a starving man who had just been offered a feast.

“Okay,” she breathed, unable to deny herself any longer.