You are here: Products The River Rising by MK Mancuso 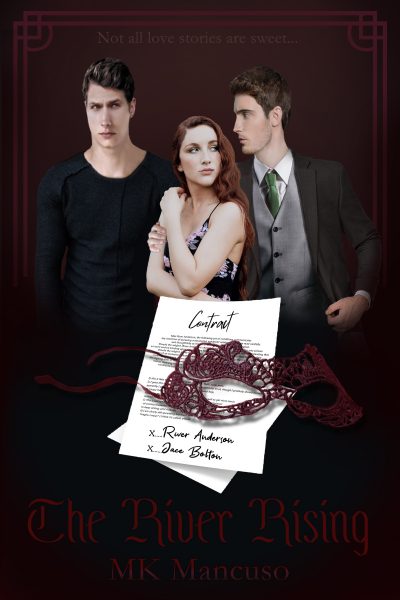 The River Rising by MK Mancuso

After finishing college, River begins working as a newsroom assistant to a local TV broadcast station. Her dream is to be a news reporter, but with her covert side work as a cam model, she knows her secret puts those dreams in constant peril. After a few dates with her dangerously alluring and charming boss, Jace Bolton, her life only gets more complicated when she not only finds out he has been staking her for months, but that he also knows her secret. Blackmailed by Jace, River must agree to date him in order to keep her future goals on track. This story is full of lust, lies, and betrayal. Caught in between the beginnings of Stockholm syndrome and a triangle love, River’s personal goals and mental sanity will be tested. So, will she be able to sort out her head and her heart before it’s all too late?

My name is Kayla but for writing, I go by MK. My love for writing has been with me since I was little, but with dyslexia I never pursued the written word fully until I switched my major in college from photography to dramatic writing (aka scriptwriting). "The River Rising" is my debut novel. I originally released it in February and although it has done well with reviews I marketed it poorly. I plan to re-release it on July 24th with it's new cover (the one I have attached here) and a new marketing plan.

Aside from writing I am a lover of kayaking, going to the movies, and exploring new towns.

By the way please now the link in the Amazon link is the first release as I have not put up the new one (not until July 24th) that is the one I would ask you review and I can send you a free copy.

It's a little personal, but essentially River is covertly working as a cam model to make extra money to pay off her student loans. This was loosely based on my experience as a cam model. I did not go as wild with it as my character, but for a time in my life I did do this and it was very hush-hush. This is where the roots of my story bloomed.

Days earlier…
I wake from a deep sleep to see Jace’s sleeping face beside mine. He is even more attractive in this state. I’ve never seen him look vulnerable; it feels surreal. Everyone obeys his every command at the office. However here, where only I can see him like this, he appears so innocent—I feel lucky.
I quietly leave the bed which causes Jace to turn in his sleep, softly mumbling. I try not to laugh. It’s no secret how sexy he is, yet here, looking adorable like he is, it’s a sweet surprise.
His apartment is huge and lavish, not that I expected anything less from him. I hardly paid any mind to the residence last night. How could I? When, after all, Jace led me in with a kiss and the next thing I knew I was wrapped up with him in his sleek sheets. I’d never doubted that Jace could have a harem of beautiful women at his feet if he so wished. Someone so smooth and enchanting doesn’t have to fight much for what they desire. I still find it hard to believe him when he said he’s “selective” with whom he dates, because after all, he chose me. Maybe I was just a quick lay in his mind. I know the truth will come out when he wakes up; people are more honest after they get what they want, so I’ll try to savor the moment just in case reality breaks my heart.
I take one last glimpse of him sleeping soundlessly and hope my doubts aren’t confirmed when he wakes.
Exploring the apartment, I enter the study and skim over his massive book collection. Jace mentioned he’s a lover of literature, but this far exceeds what I had pictured.
I run through the titles, humored by the vast spectrum including everything from Dr. Seuss, Bronte, Twain, JK Rowling, Orwell to just about any author a person could think of. Then, I hear a ping. I look over to see his desktop light up with an email.
It reminds me that I need to send an email out about the revised schedule Margo wants the office to follow. I don’t think Jace would mind me using his computer for a work issue, so I sit in his big leather chair and scoot forward.
As I go to pull up the web browser, I notice something conspicuous on his homepage. I see a file out by itself away from the others titled “River Anderson.”
Why does Jace have a file on me? Is it a company thing? There aren’t any other files like this though.
I click it. Inside are copious amounts of photos. Images of me in town, me walking out of my townhouse, my roommates, me at work, me participating in the local improv group, even photos from before I got my position at his company. I feel blood rush to my head and I feel faint. Every fiber of my being is screaming to run. This can’t be right. It can’t really be what it looks like, right?