You are here: Products The Risks We Take by Barbara C. Doyle 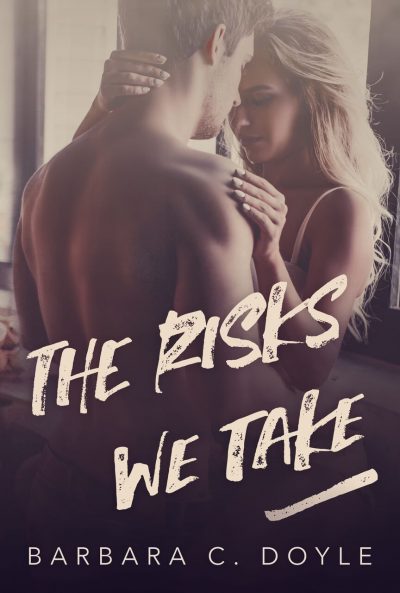 The Risks We Take by Barbara C. Doyle

We were the push and the pull of the ocean – a combination that couldn’t decide it’s ending factor. After twelve years, you’d think seeing each other would be welcome. But too much has changed since we parted.

But now he was there, living in the apartment next door like he could waltz back into her life. No amount of time could heal how much he missed as they grew up … grew apart.

All he wanted was to get to know the girl he used to love spending every waking moment with, but all she wanted was to be left alone by the boy she blamed for all the pain.

Her journey started at the young age of fourteen, and grew as she pursued a degree in English and Journalism throughout college. She believes that the written word is best used as a mode to escape into a different reality, thus the birth of her novels.

Her other passions include binge-watching Netflix, reading, and hanging out with her cat.

I wanted to write a book that was raw and emotional. I wanted to show how the rockstar life wasn't always full of glitz and glamour like it's portrayed. Fame takes a lot out of Ian Wells, and he seeks out peace in an old childhood friend that he hasn't seen in a long time. His solace is meant to bring him back to a reality that he never knew he cherished before his band Relentless became famous.

Just fucking great.
After a twelve-hour shift of waitressing at the diner, a two-hour long dance recital, and an hour-long chat with the last person on earth I wanted to talk to, I was stuck outside of my own apartment building. Guessing from the huge group of pushy men and women holding huge ass cameras and microphones, I assumed some lucky bastard won the lottery. Either that or the crazy cat lady had finally kicked it and her once-beloved pets started to get rid of the body themselves.
I shiver at the thought.
The thing is, I’m not a patient person. Especially after being on my feet nonstop and dealing with idiots. I’m tired. I’m cranky. I want to heat up some microwavable mac and cheese, and go to bed.
So I elbow my way through the crowd to get toward the entrance. There are a few murmurs, but I don’t hear anything that piques my interest as to why they’re blocking my building. To my surprise, there are two massive men barricading the door, and they look serious. Like, ‘try to pass us and we’ll shoot you’ serious.
I’m too tired to care though.
The blond one holds out his hand. “No entry.”
Between his stoic expression, massive biceps, and baritone voice, I don’t really think arguing will help. But I have a date with my bed that I don’t want to be late for, and I’m not going to let two bimbos stop me from the sleep I deserve.
“I live here.”
The brunet rolls his eyes. “Like we haven’t heard that one before. We checked the list, lady. Everybody who lives here is accounted for.”
Is he kidding me?
“Well you better check again,” I all but hiss at him.
Bimbo number one looks down at me. “Listen, lady—”
Lady?
I am twenty-two years old, and I have a name. Do either of these men have manners? First, they refuse to let me enter my own damn apartment, and then they refer to me like I’m forty. That isn’t setting well with me.
“Listen here,” I tell them firmly, “I live on the second floor in apartment 2b. I pay an outrageous amount of rent per month, and I plan on getting as much as I can from it. And for your information, I have a name and it isn’t ‘lady.’ So I suggest that you and your goony friend move out of my way so I can make dinner and go to bed. Do we understand each other?”
I hear a click from a camera behind me.
I turn around and glare at them. “I don’t know what the hell you’re doing here, but go away! Nobody wants their goddamn picture taken.”
One of the bimbos behind me snickers.
One of the reporters steps forward. “We’re not leaving until we have a story.”
I eye them. “You want a story?” I hold up my middle finger to them. “Why don’t you report on how this overworked, underpaid adult is being harassed by a bunch of moronic reporters? Don’t think I won’t call the police.”
“We’re not doing anything wrong,” somebody in the crowd yells.
“This is private property,” I reply coolly. “By invading this property, you’re trespassing. I may not be a cop or anything, but I know my rights. I swear to God if you don’t leave this place in five minutes, my foot is going to be so far up your asses you can taste it.”
They all exchange looks.
I stand there with my arms crossed, making sure I make eye contact with all of them. I’m not going to back down, and they need to know that.
It isn’t until I pull out my cell phone and dial that they start to disperse.
When every one of them is gone, I hang up. I turn and face the men again. They both look highly amused at my act, but the exhaustion I feel drowns out every care in the world.
“Were you really calling the police?” the blond one asks.
“Nope. Now are you going to let me in?”
The brunet one shrugs. “She doesn’t seem like one of them,” he confers with his buddy.
“She could be playing us.”
I groan. “I’m not playing anybody! I don’t know why you’re here, and I personally don’t care. Whatever list you’re looking at has to be wrong, because I live here, which means not everybody is accounted for. And for the record, this is an apartment complex, not a club. We don’t need any lists or bouncers.”
They both tilt their heads back and start laughing.
“You’re a feisty one,” the brunet one muses.
“He’s going to hate it.”
My eyebrow raises. “Who?”
Blondie opens the front door. “If you really live here, you’ll find out soon enough.”
I have no interest in digging for details. All my mind can think about is getting out of my sneakers and socks and feeling the cool hardwood floor against my aching feet. Whatever is going on can wait until tomorrow.
“For the record, my name is Kasey,” I tell them, stepping between them into the building.
There’s no avoiding their sudden interest in my name, but I wave them off. I hear the door close behind me, along with their hushed murmurs, but keep walking without looking back.
My give-a-damn has thoroughly been busted after the day I had. I just hope they’re gone in the morning, and my life goes back to normal.
Boring, but normal. Just how I like it.

Be the first to review “The Risks We Take by Barbara C. Doyle” Cancel reply