You are here: Products The Reaper’s Contract by Emma Sheppard 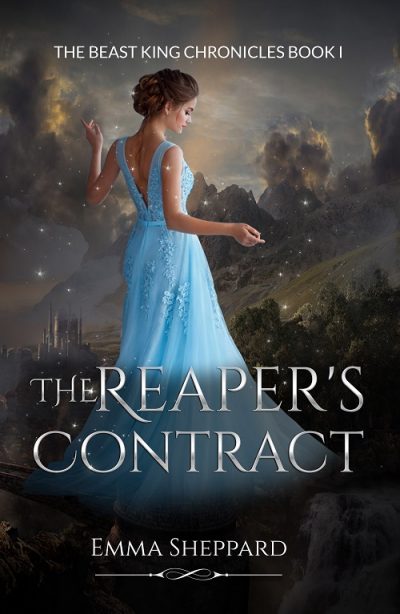 The Reaper’s Contract by Emma Sheppard

A fantasy tale of romance and suspense, a young heroine must overcome a forced secret marriage to a dashing lord in order to survive under the rule of a mad king.

Lady Kylia Sampson is young, beautiful, and harbors a deep resentment towards the man who is bound to protect her. Lord Luke Elgin has his own secrets to protect, and no time for an impetuous young woman while the kingdom falls into civil war. Finding themselves being masterfully manipulated by the realm’s greatest threat, the beauty and the warrior are thrown together in a battle to save their lives, and the kingdom.

Will Kylia fall to Luke’s passionate kisses, and forgive the man she swore to hate? Or will they both meet their doom at the hands of the mad king?

Enter the world of fantasy and romance that is The Beast King Chronicles.

Available on Kindle Unlimited and Amazon.

Emma Sheppard lives her with husband, two cats, and dog in a northern Canadian city where the long winters give her the perfect excuse to curl up with a blanket and good book. Writing fantasy romances (with a touch of suspense) merges her love of all types of fiction. A big fan of the genre ~ who doesn't love a good love story with heroic sword fighting? ~ Emma loves her heroines and heroes to be witty, courageous, and with their faults.

Emma is currently working on the second book in the Beast King Chronicles.

I love romance books. And science fiction books. And all types of books really.
I have been writing since I was little, but finally got over my fears to write my first fantasy romance. Inspired by the historical romances of Julie Garwood, and the mystery/suspense of J.D. Robb (Nora Roberts), I wanted a romance tale that included sword fighting, passion, and dark secrets.

A civil war ravaged the land. For forty-three years the royal house, under the Banner of the Bear, fought against the House of Tamar. On the day of the last great battle, the king lay on the battlefield, gasping his last breath. From the mud and blood, the young Prince Ulric took up the sword from his fallen father. In a duel that would echo throughout the night, Ulric slayed Coden Tamar ending the long war with a final swing.
With the head of the powerful House of Tamar dead, the usurpers were overthrown. Ulric was crowned the Beast King, and the sounds of ringing swords halted as he united the houses under his rule. This new realm joined by the Beast King’s might set forth a renaissance of beauty and bureaucracy. The de-struction and needless death ended. The land once again became fertile underneath the scorched earth. Under his rule, and aided by his powerful allies, the land and peo-ple rejoiced.
The joy did not last. Over time the land turned sour and whispers of madness permeated the castle. As the Beast King grew ill his commands became more erratic and volatile. Growing increasingly reclusive, the King handled all his commands through secret meetings and messengers. Motivated by either fear or paranoia, no one was sure, the trade routes were stopped by Royal Decree. The houses loyal to the Beast King, sworn to sta-tion at the Crowning Ceremony, were soul-bound to protect and uphold the Beast King’s reign. Failure would result in a punishment worse than death.
Famine began to devastate the land and its people. Battles were fought among the noble houses for fertile land. Farmers and the townspeople, hungry, angry, and afraid, revolted. The sons of the fathers who fought alongside the Beast King picked up their swords. It was only the power of the Houses still loyal to the Beast King court that a tenuous peace was maintained.
As years passed under the ill king’s reign, it was on-ly a matter of time before a new civil war would emerge.

Chapter One
Year 1079
Reign of King Ulric the Fifth