You are here: Products The Real Me by R.M. Duffy 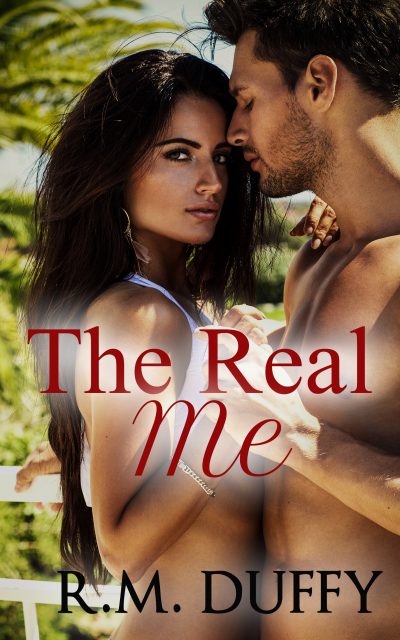 The Real Me by R.M. Duffy

In order to get out of the social funk she has been in her entire life, Dr. Lexi Monroe goes and does something completely out of character. On a whim, she signs up for a trip to Hawaii with a company called WanderLust, in hopes of stepping out of her comfort zone, and finally learning to have fun, even if it means pretending she’s someone else for a while.
Officer A.J. Owens has had his fair share of undercover cases, but this new assignment has him breaking all the rules. Not only is he screwing up left and right, but he’s starting to fall for the sweet, shy woman who turns out to be his number one suspect. Can he get to the truth before he not only loses the case, but the woman he loves?

My love of reading started in elementary school. When everyone groaned about finishing their reading lists, I was already halfway through mine. It wasn’t until I was about thirteen when I picked up my first romance novel. That was all it took. I was instantly hooked on the genre. My love for it grew so much that one day, many years later, I decided I wanted to write my own stories. It has been one crazy, scary, rollercoaster ride, and I hope it never ends.
When I’m not staying up until the crack of dawn writing, my husband, three children, and I like to spend as much free time as we can outdoors. Whether it’s going to parks, the zoo, or just hanging out in the driveway blowing bubbles, we always have a great time. And when we aren’t hanging with the kids, my husband and I like to get out to see as many music concerts as we can. My love for music ranks right up there with reading and writing.

This book was actual inspired by a radio commerical, lol. It was advertising a organization fir singles to meet singles. My author imagination just kicked into gear and The Real Me was born. I had so much fun writing this story. All the characters are very dear to me, and hopfully more of their stories will continue in the future.

Officer Anthony “A.J.” Owens sat with his partner, Dane Brooks, in front of the hotel security monitors. The hotel had signed up to host WanderLust three years ago and there had been rumors circulating regarding illegal activities, prostitution being number one. The police department had only gotten anonymous tips about the illegal activity, but in the past year, more and more talk had been going around. And since they needed more than just tips, it was time to get down to the bottom of things. Time to find out whether the company was legit or just a cover up.
“Okay, so you and Dane have been briefed about the case.” A.J. and Dane nodded in unison as they waited for their boss, Lieutenant Green, to continue. He was a huge man with an old-fashioned thick black moustache that completely covered his upper lip. Reminded A.J. of the police officers from the horrible seventies shows his mom use to watch when he was a kid. It was unusual for A.J. to see his boss out of his black uniform. The wildly printed blue and green Hawaiian shirt and khaki pants made him look like a normal tourist, which obviously was the idea.
With his hands crossed over his protruding belly, Lieutenant Green leaned against the wall in the tiny room. “The hotel has given us permission to use these security camera as we need and we have their full cooperation. Sergeant Holfeld,” the Lieutenant added, nodding his head in the direction of the woman who hadn’t said much since they arrived, “will be covering the monitors while you both blend in with the singles.”
Sergeant Holfeld stepped forward and shoved at a couple of red curls that had slipped from their binding onto her forehead. A.J. hadn’t met her yet. He knew she’d transferred from Washington and just made Sergeant. A lot of the men in the department had their panties all in a bunch about it. A.J. wasn’t sexist, and he didn’t pay attention to the work gossip. Especially when it was about himself, which it usually was. He’d heard the rumors. How could he not? Just because his parents were wealthy, people in his unit assumed he was just here to “play” officer. They didn’t think he took the job seriously, so he had to prove himself over and over again. It was becoming tiring, but he loved being a cop, and was willing to put up with all the bullshit.
Opening a briefcase, Sergeant Holfeld handed them each a set of ear pieces. “These are new so we haven’t worked out all the bugs yet.” She opened a laptop next to the monitors, and typed for a few minutes. “I need for you to wear these at all times.”
“All times?” Dane smirked. “Showers and everything?” Dane was one of A.J.’s best friends and the biggest player he had ever met. He didn’t even have to try; with his dark and dangerous looks, women threw themselves at him. It was all about fun with him. Unless it was about his job. Police work was the only thing he took seriously.
Sergeant Holfeld’s cheeks were tinted pink as she straightened her spine. “Contact with me ends once you take out the earpiece, officer.”
“Good to know.” Dane winked at her and A.J. stifled a laugh.
A.J. and Dane had picked right up from where they had left off. Damn, he couldn’t believe he had been gone for two years. But the woman he loved had followed her career to New York and he followed right behind. The ache in his chest reminded him to get his head out of the past. With a deep breath, he focused on the here and now.
“Alright.” Lieutenant Green pushed off the wall and looked at his watch. “You have about an hour before you’re to go to the meet and greet in the conference room. We’ll meet back here this evening.”
“Time to get dolled up.” Dane slapped A.J. on the back as they exited the security room. “See you in an hour Mr…” He raised his eyebrow, waiting for A.J.’s response.
A.J. thumbed through the folder, looking for his undercover persona. “Devlin.” He extended his hand to Dane. “Scott Devlin. Pilot.” Which wasn’t far off, seeing how he did have his pilot license.
Dane nodded as he pumped A.J.’s hand. “Brad Cooper. High school football coach. ”Dane fit that persona to a tee. Back in high school he had been the all-American quarterback. He would have gone professional if it hadn’t been for the badly broken arm. He was never the same after the surgery.
Dane saluted him and took off down the employee stair well. A.J. snuck out the back door, the evening sun blinding him as he rounded the back of the hotel toward the indoor pool. From here, he could sneak back in and head up to his room without being noticed too much. The pool wasn’t usually occupied during the day. Everyone was out on the beach. He couldn’t blame them. The day was perfect and the sound of the waves hitting the shore made him itch to grab a surfboard and let his mind go for awhile. But, he wasn’t just having fun in his childhood home. He was on assignment.
With the details of his case contained in the folder he held under his arm, he ducked through the hotel doors to head up to his room. He had a little less than an hour to become Mr. Scott Devlin.

Be the first to review “The Real Me by R.M. Duffy” Cancel reply