You are here: Products The Rake & The Maid by Lotte R. James 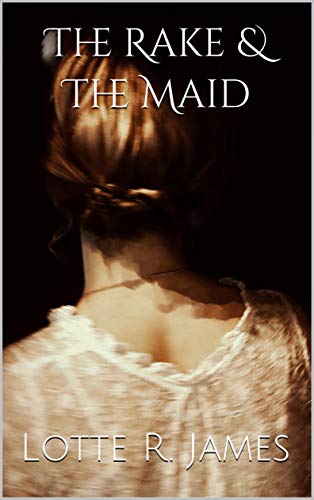 The Rake & The Maid by Lotte R. James

Euphemia Fortescue ran away from an arranged marriage ten years ago, and since, she has suffered the whims and trials of false friends and twisted lords. But since becoming a housemaid for Harcourt Sinclair, she has found some semblance of peace and purpose.

Harcourt Sinclair has been planning his revenge for twenty years against those peers of society who took everything from him. But his single-mindedness will cost him, unless he can learn to trust his least expected saviour…

Both live in the shadows, and know all too well the cruelty of those in power. The darkness in their hearts means they can never love – doesn’t it?

A tale of redemption, adventure, secrets, desire, and love in Regency London.

Lotte R. James spent most of her life in a windowless office crunching numbers and dreaming up stories of love and adventure. Finally she took the big leap and is currently working on her third romance novel, along with feature scripts and and exciting fantasy novel.
When she's not scribbling on tiny pieces of paper, she's off wandering the countryside for inspiration, nestling in a coffee house, or snuggled with her two cats, Blackie and Rosa.
Please let her know what you think by giving her a shout on Twitter – @lottejamesbooks!

With The Rake & The Maid, I really wanted to explore characters that wouldn't normally get a HEA! They live less than respectable and proper lives, and are not particularly "good" in any way. But that doesn't mean they aren't loveable! Besides, I really wanted to write a fun, dangerous and sexy adventure set in Regency London!

Harcourt Sinclair was not a man accustomed to such difficulties when it came to the long-practised art of seduction. It was meant to be a simple affair, quick, delicate, certainly, but nothing as complex and tedious as it had so far proven to be.
Harcourt gazed out of the window of his study, a scowl on his face that gave him the air of some infernal wraith hiding in the shadows. Which wasn’t entirely far from the truth. How was it that his oh-so-perfect plans, twenty years in the making, were now being thwarted by the very unexpected resolve and shrewdness of little Miss Lydia Mowbray?
It was his own fault really, he had underestimated the little thing. Petite, angelic blonde, with crystal blue eyes, delicate features and curves, a delightfully full, shapely mouth, she definitely looked like an easy target. Easy prey…
Only so far, she had been anything but, carefully countering his attempts, crafting her own enticements to insure his continued interest. As if he could ever lose interest. Little did she know she was only the small cog in a much grander scheme… Her ruin was not debatable; only how quickly he could manage it was.
Any doubts he had needed to be squashed, and this messy affair concluded. Loathe as he was to admit it, it didn’t help the matter that he actually liked the little creature. Desired her, and wanted her in his bed. And everytime she refused him only made his need greater. Careful not to seem desperate…
Raking his fingers through his unfashionably long dark curls, he sighed, hoping to find perhaps some divine inspiration among the throngs now ambling around Green Park, and the hordes of workers and gardeners milling about the new landscape therein. Desperation, or any hint thereof, was sure to scare her off. No, delicacy, always. And jealousy…
Why had he not thought of that before? Perhaps because he could think of no other, little Miss Lydia seemed to be invading his every thought… Pull yourself together, damn you!
Yes, his own disinterest was sure to peak her own he decided. The illusion of his disenchantment of her bountiful charms was sure to coax her straight into his arms. Yes, perfect…
Only now, he needed to find the bait, and set the trap. He couldn’t just use anyone, either. Delicacy, always. Couldn’t very well be another of the ton, that would take weeks to organize properly, and then there would be expectant families to wield off… Out of the question.
Neither, could it be one of his many acquaintances of the demi-monde, who were much too well known to even the most innocent debutantes. A common whore might suit, but then, to find a clean one, who did not instantly and with a sharp, perfunctory glance, give away her profession… That would be tricky. Not impossible, but tiresome.
Much like this entire business seemed to be becoming. Tiresome. He would certainly not refrain from using Miss Lydia well once he ensnared her, he was being put through far too much trouble for it to go unpunished. And punishment would begin with his choice of bait. Genius…
Someone plain, simple, unremarkable in every possible way, to truly whet Lydia’s jealousy. He could almost hear her now. You would choose that wretched drab thing over me? Oh, yes. That would do. Very nicely indeed.
‘Rawlings,’ he bellowed towards the door. ‘Rawlings!’
There was the sound of a scramble on the stairs, and in the corridor, a few shouts and expletives, before his footman, Rawlings, threw open the door and rushed in, attempting to regain some manner of composure whilst red-faced and out of breath. It was almost amusing, he had the look of mole on the verge of heart collapse.
Harcourt would have laughed if he had any attention to spare, but he had a mission.
‘Yes, Sir,’ Rawlings squeaked, smoothing the few hirsute strands of grey hair on his head. ‘What may I do for you, Sir?’
‘That housemaid,’ Harcourt said gruffly. ‘The plain one.’
‘Which, Sir?’
‘Gods, it’s not my job to remember them all,’ Harcourt growled, waving his hands, trying to find the words to describe the unremarkable thing he had seen lurking about occasionally. ‘The young one.’
‘Miss Fortescue?’
‘Good God, is that the creature’s name? Most interesting thing about her.’
‘What about her, Sir,’ Rawlings asked hesitantly, bringing Harcourt back to the room.
‘Bring her here. I must speak with her.’
‘Sir, if there are any concerns -’
‘Did I stutter, Rawlings? Bring. Her. Here. Now.’
‘Yes, Sir,’ Rawlings said, rushing back out to find the housemaid in question.
Harcourt knew it was irregular, and that he should have more patience with his servants, particularly Rawlings who had served him well for the past five years, but he needed to conclude his business without delay. Delicacy would not prevent them all from their below-stairs gossip anyways.
Besides, it would not be the worst, nor the most notable happening to occur in this household. They may not approve of his rakish behaviour but their wild tongues did enjoy telling the tales of it. And there would be plenty of fodder for their gossip once he had finished with Miss Fortescue. And for that matter, Miss Lydia Mowbray.

Be the first to review “The Rake & The Maid by Lotte R. James” Cancel reply