You are here: Products The Queen’s Curse by Natasja Hellenthal 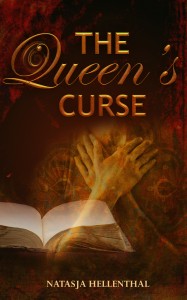 The Queen’s Curse by Natasja Hellenthal

A powerful curse holds the ancient land Ceartas within its grip. No offender ever escapes the countries’ harsh law system. Even when they haven’t been caught! This is the reason for many speculations and not in the least directed towards the mysterious young queen Artride Cumhachd.

When one morning young knight Tirsa Lathabris awakens to hear that her twelve year old brother will soon be hanged for a petty crime, she takes matters into her own hands. She decides it’s about time someone has a word with the queen about the absurd and old-fashioned law-system and to try and free her brother. Impulsive, unplanned and hot headed she is confronted with the captivating queen and soon learns the true story and well kept secret behind their country’s harsh law system. The ancient Law Book is cursed.

As long as the curse exists no new rules can ever be added and the existing ones never amended or denied. The law simply had to be followed – had to – as well as the punishments. No trials, no pleas, no nothing other than the penalty.

Many people suspect magic and therefore try to follow the law and stay away from crimes. But more people seem to have been mutilated and killed in Ceartas by the curse than by any actual wrong- doing. It’s time for change!

After many years of failed attempts, from both the old king and the queen, to find someone powerful enough the young queen finally has renewed hope. Together; the queen and Tirsa as her bodyguard, undertake a perilous quest to find the great sorceress in the Magical Land of Dochas. She might be the only person powerful enough to be able to lift the curse. But they have to hurry as they only have three weeks to save Tirsa’s brother’s life before the penalty is to be paid.

On their journey they have to deal with unfinished business from both their pasts and present. Whilst they grow exceedingly fond of each other; their relationship is pushed to the limits as they try to break through the sorceress’ powerful magical traps and overcome all sorts of dangers. New questions arise; it becomes clearer with every day of their search through this enchanted land, that its lies in the sorceress’ power to help them, but if so… will she be willing to and for what price?

Even with a little help from the local Silent Folk, the search gets more and more desperate. Especially as it looks as if the sorceress, who appears to be the Dominator of Dochas and everyone in it, is in fact trying to prevent them from coming closer. Or is she just taunting and testing them and if so for what purpose?

She is slowly wearing them down by cunningly playing with their minds, body and soul as they travel through her magical protected domain. Confused and tired they struggle to know who to trust and distrust. But their friendship remains strong; if anything they have become the best team to fight against the evil they come across; fighting demons and finding themselves in the process.

Just when they finally meet the twisted sorceress and believe they are close to their much needed counter spell, they are in for another surprise.

As involved as they are by now; they find themselves facing a difficult choice. To not only free their own country, Tirsa’s brother and themselves – for their romantic relationship will never be tolerated by the law book and their lives will be at stake- but also Dochas and the innocent Silent Folk. In order to free everyone someone has to be saved or be killed… That someone is just as cursed as Ceartas is; not by a real spell but by her own history and the prison she has built around her heart over the years. That person is the evil sorceress and queen of Dochas herself. She is their last and only hope and their biggest challenge…

I have written two further Fantasy novels and a trilogy which I am currently in the process of getting them ready for publication.

What is evil and how does someone become bad; a question that has always intrigued me. In my work I deal with all elements of life, love and loss and try to build strong characters as realistic as possible, for even though the genre is Fantasy I want people to feel connected with my heroes and villains as they would with their friends.

Sample from Book:
Tirsa rode before the queen, as was the rule, to protect her from any threat. She had a good look around; but saw only happy people.
Slowly they rode towards the outer gate, which was fully open by now, and the lowered drawbridge, with accompanied cheers.
When they left the crowd behind Artride clutched at her reins and overtook her suddenly, ordering her to follow. Tirsa had some idea which route they would be taking to reach Dochas, but did not feel at ease. They crossed the Royal Valley and entered a wood full of old beech trees with many spring flowers underneath. The fresh air carried the scent of dawn and the sweet smell of new leaves. Birds called out in the canopy overhead and they spotted a small group of red deer which curiously stared at them before sprinting away, alarmed by the thudding hooves of the horses. Sand rose in clouds beneath the horses’ feet.
It was a still, grey morning with almost no wind; as if the country was holding its breath in anticipation for what was coming.
The hard path covered with dark brown soil, was wide enough to ride side by side, but Tirsa didn’t think that was appropriate, for it could mean they were equals and she certainly did not want Artride to think she would be thinking that. The queen slowed to a trot so that Tirsa had to slow down as well. Curiously, she turned her upper body in the saddle to look at her bodyguard.
‘What is the matter, Commander? Are you afraid I shall bite if you come too close?’ she said with a hidden sneer.
‘I think I hear horses behind us. It is very likely we will be followed, my Lady. It is safer if I ride behind you,’ she answered plainly. ‘And I believe it’s also the rule?’ she added gingerly.
‘Do not worry about that one; it is up to me to decide. And I have ordered my guard to stop anyone trying to follow us and they will do their jobs well, Tirsa. So do not be troubled. Come and ride beside me.’
‘Does anyone know where we are going?’ she asked obeying the queen’s order.
‘No, not even the Head of the Guard.’
Tirsa smiled amused, coming a little closer so she could smell her flowerlike fresh scent.
‘So Jaromir too believes you are on a mission to find a husband?’
Artride had to suppress her giggle, which wasn’t easy for her when she thought about the nervous, unsettling expression on his face, earlier.
‘Won’t the book punish you for that?’ And Tirsa had to rephrase herself as it had sounded as if the book had a mind of its own, ‘I mean: the curse on the book.’
‘For telling a lie? Oh, no, not at all. The Royal Family is excluded from being punished for telling a lie like this, for a lot of things actually we are excused. In fact we are obliged, and sometimes even obligated to lie’
She had a sudden sad look in her occupied eyes, but smiled at Tirsa who was riding beside her now. ‘Good, this will be a long journey and it is much nicer if you do not have to look at both my backside and my steed’s all the time.’
‘Are you sure it is a good idea to have just me along as a guard? More soldiers to protect you until we reach Dochas wouldn’t have hurt. In fact, if we reach Dochas at all unhurt it will be a small miracle. There are many people who will try to take this opportunity to do you harm – even if that will probably mean the end of their own lives as well.’
The queen’s expression was sad. ‘I realise that all too well, that is why I have ordered a dozen of my guards to stay close by, at least for today; that is probably what you heard before. Good for you on that one; praise for your good hearing and senses Commander. After today, we shall take a very unlikely route no one will ever suspect, and I have ordered the guards to go back before nightfall. No one may know where we are going.’
‘Why couldn’t we have just sneaked away quietly, without the crowd seeing us leave, without an announcement?’
‘I wish we could have. The book would not have let us leave; I had to have my intentions announced by law for a longer journey. I was going to tell you.’ And she refrained from telling Tirsa about the punishment the queen herself would have gotten if she hadn’t done so: indescribable pains in her stomach the longer she would have stayed away from Ceartas, from the castle and the book until her return.
‘It is a plausible story I made up, even the book cannot deny. Royalty have to marry and finding a husband comes with it. However, our lives will be worth nothing if we do not undertake this quest, Tirsa. To not be able to truly live, to have a book rule your life and everyone in your country, your brother … A little risk is unavoidable. From what I have heard, you are worth ten soldiers anyway; so why should I worry? I feel safe enough. Now keep your voice down, who knows who is listening. Come on.’
The Book?