You are here: Products The Princess, the Pea and the Night of Passion by Rosetta Bloom 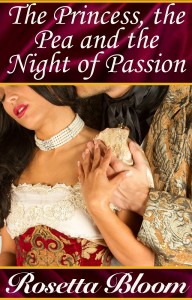 The Princess, the Pea and the Night of Passion by Rosetta Bloom

In this grown-up version of the famous fairy tale, Princess Adara is running from her old life and a forced betrothal. Adara wants love and passion, but knows she can’t get them back home. When a raging storm halts her escape, Adara seeks refuge in the first dwelling she sees.

Prince Richard is tired of the trite, vain, frigid princesses his mother introduces him to in hopes he’ll marry. On this stormy night, he’s in the mood to love a woman, but he’s all alone.

Adara arrives on the castle doorstep, saying she’s a princess in need of help. The queen is doubtful and decides to lock Adara in a room with a pea to determine if the girl is as royal as she claims. Richard believes the beautiful, charming stranger, but he wants her locked in a bedroom for other reasons.

When Richard and Adara hook up, there’s more than a pea-sized bit of passion involved….

Rosetta Bloom writes romance novels full of passion and love. Her first novellas, a series of passion-filled fairy tales, began publishing in December of 2014 with The Princess, the Pea and the Night of Passion. Her second novel, Beauty and Her Beastly Love was published in January of 2015. The third title in the fairy tale series is due out in the Spring 2015. To learn more about Ms. Bloom, please visit her website at http://rosettabloom.com.

I had decided to write a series of steamy retellings of classic fairy tales. I was looking for one that was shorter in nature, but would be a lot of fun to re-tell. I came up with the Princess and the Pea. It’s a great tale to add some passion to, as you’ve got a girl and a guy in a castle all night, and per the original fairy tale, they agree to get married the next day. Well, what exactly happens in that castle overnight? I thought, well, that’s something fun to play with. So, I looked at ways I could get this story to make sense from a logic perspective. Why would this princess be stranded, and what might make her give in to a night of erotica with a man she barely knew. So, it was a great deal of fun. I hope people enjoy what I came up with.

There also was a hearth with a roaring fire. A few logs of wood were beside it. A little further away was a table with the bread and ale that Lionel, the butler, had mentioned. Adara walked over toward the fire, enjoying its warmth. The king and queen definitely didn’t believe her if they expected her to tend to her own fire. But, Adara had learned a thing or two in the last months, and she could tend a fire. She sighed, then turned back to the rear wall and looked at the behemoth. She wondered if the king and queen were mad. Did everyone sleep in a bed like this? There had to be 20 mattresses piled on top of the frame. They’d given her a ladder! It was insane. She considered climbing the ladder to try to knock one of the mattresses to the floor. At least she could sleep on it without worrying that if she had a nightmare and rolled, she’d fall to her death.
She turned away from the bizarre bed and walked over to the windows, where a trunk sat beneath one. On top of the trunk was a nightgown. She assumed it was for her. It was white and folded, and when she lifted it up, she gasped. It was a sleeveless frock, but rather than being full length to her ankles, it looked like it would barely cover her ass.
“You’ll look lovely in that,” she heard a voice say. She startled and turned around to see Prince Richard.
“Where did you come from?” she asked, her heart racing from the surprise.
“My room,” he said simply, as if that were a decent explanation. He was standing near the towering bed and dressed in trousers and a shirt, but no shoes.
Her heart was still beating fast, even though she was over the initial shock of finding the prince in her room. As his crooked smile lingered on his sensuous lips, she wondered if there were some other reason her heart was beating fast. She tried to push that thought from her mind, and asked the prince, “How long have you been here?”
“Long enough,” he said, coming closer to her, stopping when he was close enough that she could feel his fennel scented breath warming her face. He was almost a head taller than her, with broad shoulders and what looked like thick muscles beneath his shirt. He had dark brown curly hair and one dimple on his left cheek that made him look a tad mischievous. Prince Richard smiled at her, reached out his hand, and slid a hair that had fallen in front of her eyes behind her ear. That small touch, when his hand grazed her ear, felt like it started a flame within her, her heart continuing its accelerated pace and a lump of anticipation building in her fluttering tummy. She was surprised that his touch would do that to her. She’d registered that he was handsome when she’d seen him for the first time, and she’d registered his kindness. But, she’d failed, somehow, to register his sex appeal. Earlier, she hadn’t noticed how his blue eyes twinkled in low light.
He was staring at her, his eyes a calm pool inviting her to dive in. She was losing her train of thought, losing what she’d wanted to say. “Long enough for what?” she finally sputtered.
“To know that the door is locked and you and I are trapped,” he said, taking his hand and stroking her cheek, his fingertips leaving a trail of ecstasy tingling in their wake.

Be the first to review “The Princess, the Pea and the Night of Passion by Rosetta Bloom” Cancel reply