You are here: Products The Prince of Zammar – The Complete Serial (Books 1-6) by Samantha Nolan 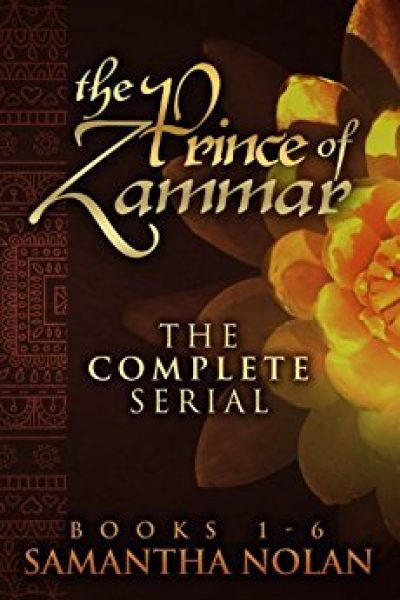 Prince Jalen ‘Anaq Al-Jameyri, heir to the kingdom of Zammar, was once an acclaimed general and a war hero, but he now hides a dark secret behind a mask.

Sadie used to work on the outskirts of Zammar’s capital, offering her services curing illnesses and injuries. But her magical abilities attract the attention of the authorities, and she is arrested and found guilty of a crime she did not commit.

On the day of Sadie’s execution, Prince Jalen stays the executioner’s hand and offers her a bargain: a year in his service in exchange for her life and freedom. With nothing left to lose, Sadie accepts the deal and follows him back to the palace.

Though everything separates them, Sadie feels drawn to the mysterious prince, and she is determined to become more than a simple distraction to him. With Jalen, she discovers passion unlike anything she could have imagined, but his secret soon threatens to destroy them both.

Into the Fire (The Prince of Zammar 1)

Slow Burn (The Prince of Zammar 2)

Smoldering (The Prince of Zammar 3)

Rising Heat (The Prince of Zammar 4)

Up in Flames (The Prince of Zammar 5)

From the Ashes (The Prince of Zammar 6)

What at first started as a novella soon became a complete, serialized novel that the authors worked on writing during the summer of 2013. Now that all six parts have been released, Catherina and Mana — writing under the pen name Samantha Nolan — are proud to present the complete serial in a single volume. A sequel is now in the work, and they hope to release it somewhere at the beginning of 2014.