You are here: Products The President is No More by Olga Toprover 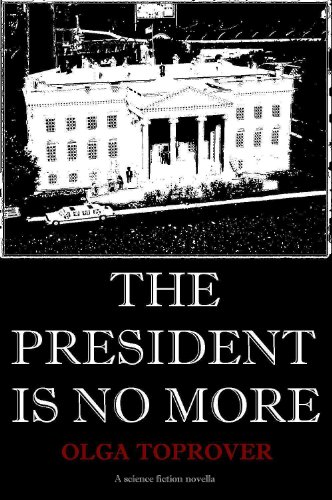 The President is No More by Olga Toprover

In a future where progress is accelerating beyond humanity’s ability to keep pace, the Humanists are trying to live in harmony with nature and avoid the advancing technology. One night, a fire destroys Kingstown – the Humanist settlement on the West Coast. As details of the tragedy emerge, outrage sweeps the Unites States, putting President Bill Freeman’s reelection prospects in doubt.
Negotiator Mia Arc faces a challenge of a lifetime when she’s asked to defend Humanist rights in the face of growing controversy. As she investigates the tragedy, she finds more questions than answers. Who is responsible for the tragedy? Did robots have something to do with it? And is anybody really who they say they are in this cyber-enhanced, nano-technological, unnatural world?
Mia doesn’t know if she can answer those questions. She is not influential. She is not powerful. She is just an ordinary woman…

If you like hard science fiction books fantasizing about possible sophisticated technologies in the future and amazing accomplishments in robotics, you will like this bargain 99 cents book. This sci-fi story is featuring a strong female character and a glimpse of a sci-fi romance. Those who like smart, intellectual books that force a reader to think may like this book as well. This sci-fi story combines it all: suspense, actions, solving a mystery as well as some thoughts about future politics and the White House. Some ideas of transhumanism movement (H+) are also used in this futuristic novella. However, this story is not too serious, or heavy, it is perfect for a reader who is looking for enjoyable, entertaining book.
Book trailer:
http://youtu.be/KDgvDHhYXuM

Olga Toprover was born in Russia, lived in Canada for a few years, but currently resides in Los Angeles. Olga holds Master Degree in Computer Science from Moscow State University. She is also a published media author.

Her scientific education and journalistic experience as well as living in different cities and countries formed her into the writer she is today. Olga believes that true literature is about people. Her stories, above all, are about us.