You are here: Products The Present from Christmas Past by James Timonere 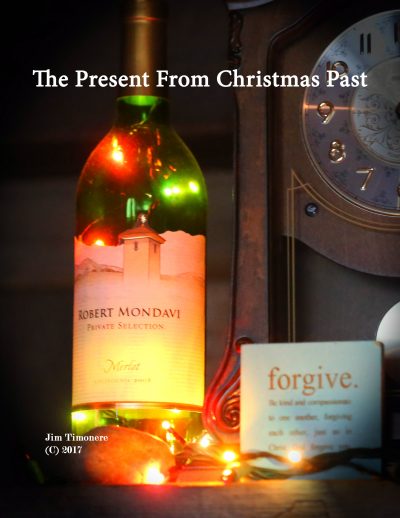 The Present from Christmas Past by James Timonere

Jim and Katie Helms have reached the end of their contentious marriage. They are driving through an impassible Christmas Eve blizzard to their final separation when they realize they can’t go on. They suddenly see Christmas lights on a farmhouse which is their only salvation from the storm. A pleasant old man named Ethan takes them in for the night. Helms and Katie call a truce for the sake of their host, but their resolve to end their marriage is firm. Then Helms has a midnight discussion with Ethan and learns the awful truth Ethan has hidden for many years. Helms may have changed in the face of this truth, but it will take something more powerful to save their marriage.

Jim Timonere was born in 1951 to a loving Italian, Catholic family. He was an athlete through high school and college then went to law school at Case Western Reserve University in Cleveland, Ohio. Soon after he became a lawyer, Jim went home to Ashtabula, Ohio and entered politics where he became the Ashtabula City Solicitor, a job once held by Clarence Darrow.

In 1984, Jim moved to Florida and took up a law practice, disaster soon followed. Jim set up businesses for a family friend who used the businesses as cover for smuggling drugs. Sometime after leaving Florida, and owing Jim thousands of dollars he had borrowed "for the business", the friend was caught with drugs and contraband in another state. As a part of the plea deal, the friend implicated Jim as part of his Florida operation.

Florida offered Jim a plea. He refused and took the case to trial. At trial, the state introduced no evidence of drugs or money Jim was to have received, as there was no such evidence. The case was instead a matter of whether Jim knew about the smuggling. The trial became a swearing contest between an admitted smuggler and a man who had no criminal record. But it was Florida at the height of the War on Drugs. The jury couldn't believe a lawyer could be so blind, not even the juror who often took a nap while hearing the case.

Jim was convicted. He lost his family, his reputation and his license to practice law as he sat in prison for almost 7 years. "Christmas Presence", a long lyrical poem which is Jim's first published work, was written more than 25 years ago in a jail cell. The poem has traveled with Jim through all of this. "Christmas Presence" tells a moving story of abandoned people blessed by the presence of strangers at Christmas. Jim has been told some families read his poem together every year on Christmas Eve.

Jim was released in 1998 and was lucky to meet the love of his life, Jane. The Timoneres live in Ashtabula. Jim works as a paralegal in Jane's Jefferson, Ohio law practice. Between them, Jim and Jane have six children and ten grandchildren. They like to travel when they can take time away from Jane's busy practice and hope one day to retire to Lake Tahoe.

The story comes from my love of Christmas and my love of my wife. The characters's struggle was sometimes ours. Their resolution was what we learned together about loving each other.

In a moment, I’ll be Home for Christmas, played softly over the car radio. The only other sounds were the winter wind and tires grinding against the road. A man was driving, his hands gripping the steering wheel tightly as he leaned forward, trying to see through the glare of his headlights against the oncoming snow. His wife sat back in the passenger’s seat. Her right hand gripped the door, her left was clenched into a fist in her lap. Her eyes were wide open and frightened.
Neither of them said anything. The silence between them was more than just a tension of the moment, it was another layer on a wall neither of them was willing to breach. They were traveling in each other’s disdainful presence, both looking to blame the other for being out in the storm and the way it was with them.
The music on the radio became a man’s voice, “Good Christmas Evening, listeners. This is Late Night Nate taking you through to Christmas morning. I hope you’re all safe at home. The blizzard closed the Interstates and made any kind of travel dangerous. If you’re out on the road, why don’t you pull in somewhere and wait it out? Now here’s Mel Torme singing The Christmas Song.”
The music played for a moment then the radio died. The woman reached out and twisted the dials. Every channel was static. She flicked the radio off and turned to her husband with the fire of ancient arguments in her eyes. “Did you hear that? I told you we should have stopped when they closed the Interstate. You had to keep going. Why?”
Her husband turned to glare at her for a second, then looked back at the road. “I’ll be damned if I was going to pay to spend another night alone with you. You’re going back to your mother’s tonight, and then I don’t want to see you or hear another word about you for the rest of my damn life.”
Hurt ran across her face and left anger behind. She turned away from him and looked back through the windshield, seeing a dizzying pattern of snowflakes rushing through the headlights. She grabbed the door handle tighter.