You are here: Products The Playboy’s Proposition (The Power to Please, Book 2) by Deena Ward 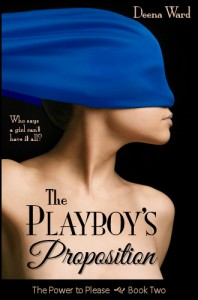 The Playboy’s Proposition (The Power to Please, Book 2) by Deena Ward

Who says a girl can’t have it all?

She wants to please the charming playboy, but Michael soon proves himself to be a stern taskmaster, pushing her further, faster than she prepared herself to go.

Even while she is drawn more tightly into Michael’s sexual hold, she cannot forget Gibson Reeves, the man who initially set her on this sensual journey. He invades her dreams, as inscrutable and commanding in her fantasies as ever he was in real life.

Soon enough, Nonnie will learn secrets about both men, realize that what seemed a simple decision, was not so simple after all.

And she will have to discover the answer to a difficult question before it’s too late. How far is too far?

Be the first to review “The Playboy’s Proposition (The Power to Please, Book 2) by Deena Ward” Cancel reply