You are here: Products The Place That Sleeps by L.R. STARR 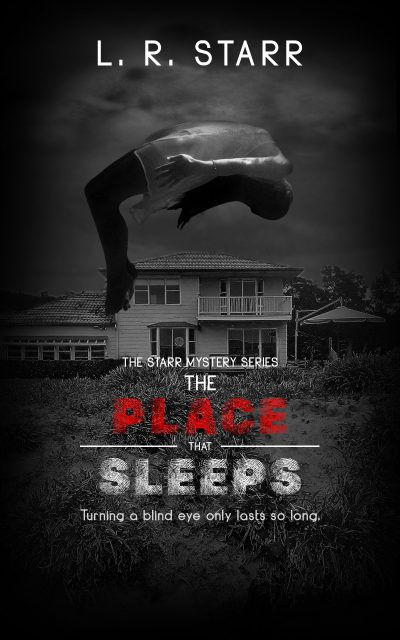 The Place That Sleeps by L.R. STARR

He likes to watch.

The place that sleeps, that’s what the natives call it. A sweet little coastal coast town on the Central Coast of New South Wales, Australia.

Piper decides it’s time for a seaside visit, she’s a frustrated investigative journo who’s on a quick getaway with her girlfriends. She picks a holiday house that’s owned by a wealthy barrister. The overpriced oceanfront rental mysteriously goes on the market every two years, except it never sells.

The walls are dripping wet with secrets that threaten to overflow from its cracks.

Then there’s Jack McMaster, the hot boy broody surfer and son of the owner. He’s drawn to Piper for more reasons than one. Locals start whispering in her ear about the house amongst the dunes, as a monster lurks and her investigative nose starts sniffing.

She might break the story of the year, but when her friends go missing and she unravels one deadly secret after another the monster wants to take her to a watery grave.

What will she discover about the broody McMaster from the sleepy side town?

You can only cover things up for so long…

L.R. Starrs is a romantic suspense writer with a penchant for private investigator heroines, assassins, and complex hot baddies who you hate to love.

L.R. Starr is a lover of mysteries, witty dialogue, suspense, romance, and fantasy. If you like to travel through your books strap in for the ride she'll take you across the country.

When she's not I'm writing she's usually exploring, and coming up with yet another devious plot or pursuing her other love which is painting and drawing. Enjoy the bedlam friends!

I was inspired to write the book by a conversation I had scrambling across the very rocks that I mention in the book! I was talking to one of the locals and she made mention of a house that sits on the beachfront. She told me that new owners swapped the house over every two years or close to. I wondered why nobody wanted to stay there? Was it haunted? What's going on in there? That got me to thinking it would be a good plot to write a story around. Originally, I was going to make it that it was cursed and someone would poison the people in the house, but then the characters came out to play with a different idea. I really enjoyed writing it. I hope readers love it too!

My sister sang that stupid rhyme. I used to watch her as the silken waves of the roaring sea crashed on the shoreline, bruising the tawny rocks of Umina Beach. I could still hear her clapping her hands together with her friend Polly like a horse’s hooves. I liked to watch. Was fun, she left like Mummy. I watched as she struggled in her submersion. The air bubbles escaping to the surface. Her white nightdress floating up around her neck, making her resemble an octopus. She was so pretty, her sandy blonde hair floating like a carousel around her. She reminded me of the others, oh how they thrashed when I closed my greedy fingers around their necks. Other times they knew death was calling and gave up the fight quietly. My longest battle was two and half minutes. My adrenaline ran high with that one. I liked it ever so much. I found myself a little out of breath, but I managed. She'd clawed at me underwater – must have been a water baby, she could hold her breath quite well. I didn’t know that part until we were further out in the middle of the sea. She appeared to be fragile, petite in size, but she had a strength that made me think she might be a seal. I found out she wasn’t after two minutes. Oh well. If I was feeling strong, I would pick more of a challenge. On that day I wasn’t looking for one. I wanted to freshen my skills is all. I thought about improving my stamina after that.

That was two summers ago, and now I was keen again to see another underwater symphony. I wanted to feel the resistance of the water as I led my victim to the watery gates of Atlantis. That’s the place they went, had to be. That’s what the monster told me anyway. Same place my mother lives now. I wanted to see their glorious lifeless limbs float to the surface as their lips turned a magnificent shade of blue. Sometimes, I wanted to revive them if only to watch them slip into the watery abyss once again. I wouldn’t let them stay at the surface, of course. That would be stupid, and I would get caught, derrrrrr. I would tie the weighted rock to the bottom of their feet and drive the boat out further to the shark breeding ground of Lion Island. I only did it when they were feeding. Easy disposal. I was doing the natural world a favour. Couldn’t be mad at me. I learned from the best. The one who taught me so well. He’s the greedy monster that took our mother too. Except her body of water was much smaller than the giant turquoise pool I swam in all the time.

Be the first to review “The Place That Sleeps by L.R. STARR” Cancel reply