You are here: Products The Phoenix Syndrome by Claire Gem 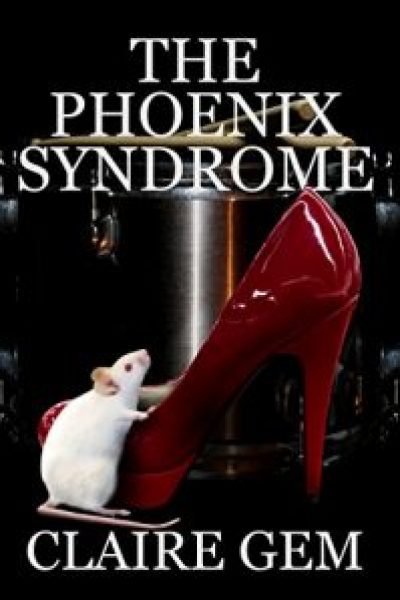 The Phoenix Syndrome by Claire Gem

Turning forty, for Lannie Marvin, is rough. It’s the day she discovers her husband is leaving her for a younger “soulmate.” At work, a crazed mouse being treated with an experimental drug brutally bites her. Then, Lannie goes a little crazy, too.

Seems she’s recently developed a serious crush on the drummer of her son’s favorite heavy metal band. Waking up to her husband’s empty closet, her finger still throbbing from the mouse bite, Lannie snaps. Under the ruse of a shopping trip, Lannie kidnaps her sister-in-law/best friend, and heads toward Bethel, New York – the site of the original Woodstock concert.

Just so happens Dreamwish is playing a concert there, and Lannie managed to procure the pair of tickets her son won but couldn’t use.

Tristan Allard, the band’s drummer, holds this benefit every year in memory of his wife, whom he lost to breast cancer. The musician is beginning to doubt his ability to write the band’s music without his wife’s inspiration – she was also his muse. Plus, he’s damn lonely. So when a sexually charged, extremely attractive, slightly older woman literally plows into him at the backstage reception, Tristan is ready to learn more about her – and her long-buried interest in musical composition.

The two head off for a wild ride of a weekend, but reality boomerangs around way too soon. Tristan is headed to the UK to audition his next album’s scores. And an elevated libido isn’t the only side-effect of that experimental drug.

She writes in two genres: romance w/a ghostly twist, and sexy contemporary. Claire’s books are like a thrill ride at a theme park. Whether it’s spooky-scary, angst-ridden relationships filled with gut-wrenching turmoil, silly chuckle moments, or hot-flash-inducing sex, Claire guarantees to take you on an emotionally intense romantic journey

That one line (and the reaction to it!) spurred the entire story idea.

But then there was the drummer. If not for the overhead monitors panning in for close-ups during the performance, I might never have known he existed. What a travesty that would have been.
In a word, he was . . . magnificent. He sat like a king on his throne at the elevated rear of the stage, sparkling silver-flake drums surrounding him like loyal minions. The monitor directly over our seats focused on him often, so close and so clear I could see the sweat glistening on sculpted upper arms, bare beneath a black muscle shirt stretched taut across a broad chest. Some sort of ink crawled over one bicep. A black-and-white paisley bandanna covered most of his head, but long, dark curls framed his face and clung damp against his neck. His facial hair, limited to a sparse mustache and goatee, was chocolate brown. I indulged in the fantasy that his eyes were that same sweet, smoldering color.
His passion for his work was palpable. Hands flying, head bobbing, he was completely engrossed, as if the music were a drug he was tripping on. His hooded eyes gave him the look of a sleepy lover, but when he did open them, I could swear he was gazing directly at me.
Looking back on that night, I can’t be sure how long we’d sat there before I fixated on my drummer boy. The music, which at first grated on my senses as way too loud and completely discordant, gradually began to permeate my brain. Before long, my bare toes started tapping against the carpeted floor. I freed one hand from my cup of wine to pat my thigh in time with the music. When my head began to bob, almost of its own accord, I smiled.
Ah, now I know why they call progressive metal fans head bangers.
We were climbing into my brother’s SUV, Paul at the wheel with Jeri and Jay next to him in the front. I sat squashed between my husband and son in the back.
“So, what did you guys do for all that time?” Ryan asked.
“We saw Dreamwish,” Paul piped up from the front, sounding as though his statement actually made sense.
“You saw our concert? You guys?” Jay sputtered through his laughter.
I opened my eyes to find my son staring at me in much the same way Jeri had been earlier.
“How’d you like it, Mom?” Ryan asked in a slight singsong of ridicule, which I chose to ignore.
I hesitated, clearing my throat. “The music is . . . different,” I said.
I caught my brother watching me in the rearview mirror. He was wearing an impish grin. “It’s true, Ryan,” he said. “For a while there, we were afraid your mother might run off with one of the roadies.”
“To hell with the roadies,” I snapped. “If I run off, it will definitely be with the yummy drummer.”