You are here: Products The Petticoat Letters by Kelly Lyman 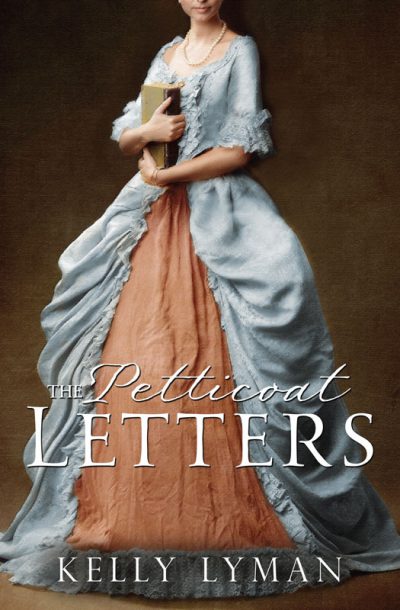 The Petticoat Letters by Kelly Lyman

At the outbreak of the Revolutionary war, Nora Bishop’s home is burned to the ground—along with her dreams, plans and all her family members except one. At 20-years-old and still unmarried, she moves to Manhattan to live with her Loyalist uncle, hoping to find her brother who has joined the Patriot cause against her late family’s wishes. But, battle breaks out and she finds herself at the mercy of one American ranger, Alex Fos-ter, who is the only person in a position to bring her to safety.

Her growing feelings toward Alex and his passion for freedom help her reevaluate her stance on the case for independence and makes her question her loyalties further. When she is asked to spy for the rebels, she agrees. But can she partake in the act of treason and do what is asked of her when the sadistic Captain William Roth seems to watch her every move and threatens the life of her brother who has been captured? And how can she grow closer to Alex when the war threatens to tear them apart?

Kelly Lyman is a dreamer, a planner and a doer. Her favorite mantra is: “Go after a dream that is destined to fail without divine intervention.” She writes adult historical romance and YA paranormal/fantasy. She has a degree in education from West Chester University and taught 5th grade before deciding to stay home full time. She loves, loves, loves history and can usually be found daydreaming about people who lived centuries ago…that is, when she’s not taking care of her four kids. Traveling to Scotland, England, and Ireland are on her bucket list. Skydiving is not. She’s mildly obsessed with mint chocolate chip ice cream, peanut butter M&MS, drinking coffee (cream only), and thinks chips and salsa is a perfectly acceptable dinner option. Her favorite color is green and if she could, she would sit on the beach and read all day long.

The Petticoat Letters was inspired by the woman, known in history as "Lady 355," who was part of the very first spy ring in America, put together by George Washington during the American Revolutionary War.

“I asked you who you are and where you were going, madam,” he said, staring at me full on, though his eyes did not hold any threatening luster.
I raised my chin and snorted, hoping to convince him he did not have any effect on me. God, he’s handsome. And tall. He’s the tallest man I’ve ever seen. “And are you going to shoot me if I don’t answer then?” I snapped.
He cocked his head to the side as if he was considering my question. I bit the inside of my cheek waiting for his response. Bloody hell, what will I do if he says yes?
“No. In truth, I don’t want to harm you, nor do I have the strength at this moment.” His eyes wandered over my person. He lowered his pistol. “Though you don’t look very heavy, so I could manage to throw you over my good shoulder if need be,” he said, shifting his weight. He winced, and his face paled.
I glanced at both his shoulders and grimaced at the amount of blood oozing down his injured left side. If I could keep him talking and standing long enough, maybe he’d faint, and I could go on my way.
“And why would you feel the need to throw me over your shoulder?”
“Because you’re coming with me.”
“I most certainly am not.”
“You are. I can’t, in good conscience, allow you to traipse all through these woods alone. Besides, I haven’t quite determined if you’re a spy.”
“A spy?” I said, having a hard time believing my ears. “You’re daft. What sort of idea is that? Do I look like a spy?”
“Nothing better than a spy with breasts. They are the least suspecting. It doesn’t help that you’re in the wrong place at the wrong time.”
I resisted the urge to cover up and straightened my spine instead.
“I am no spy, sir. Now please step out of the way so I can continue on with my journey.”
“You’ll come back with me to camp. And, spy or not, it isn’t safe for a lady to be out here alone.”
He took a step toward me.
“I know where I’m going,” I said, watching him sway. Is he going to faint?
“And where is that?”
“You’re hurt.” I gestured toward him, dismissing his question.
The corner of his mouth turned up though his face grew whiter still. “Believe me, I know.”
He put his pistol inside the waist of his pants and took a few clumsy steps toward an oak tree where he leaned up against its bark. He closed his eyes for a moment and took a deep breath. When he opened them, he stared into my eyes. His look was so open and honest my heart lurched, and I could not but help take a couple of steps toward him.
He twitched a bit, then his legs gave out from under him. He slid down the bark of the tree. “What are you doing?” he said, eyeing me.
I knelt beside him and pulled back his shirt collar. My eyes grew wide. “Christ,” I said. “It’s a wonder you were still standing.”
I ripped the edge of my petticoat, which had fortunately — or unfortunately, depending on one’s opinion — already torn. I pulled hard when I thought I had enough linen, but because of the hem, it was difficult. “Bloody hell!” I said, not bothering to whisper. I didn’t know what possessed me in this moment. I shouldn’t be caring after a man who thought me a spy. But I couldn’t leave him here to die.
The man moved, and when I looked up, he had pulled his dagger out of his belt and was handing it to me. I took it, carefully, and went back to work, slicing through the fabric. After a few pulls, the rest of the petticoat strip came off, and I laid the dagger on the ground.
“Has anyone ever told you that you have the mouth of a sailor?”
“Yes.”