You are here: Products The Permanence of Pain by Desiree Lafawn 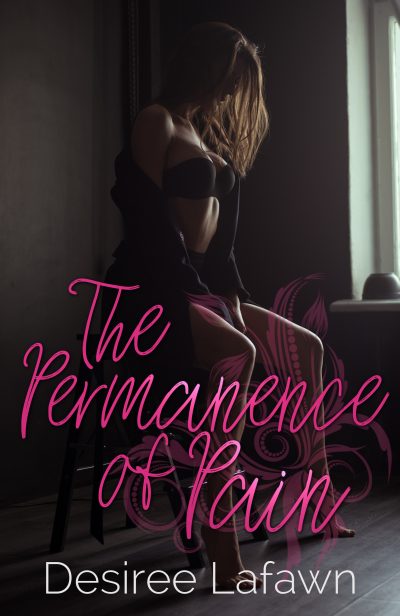 The Permanence of Pain by Desiree Lafawn

Two broken people don’t make a whole. But together, they might have a chance at redemption.

Regina O’Shea is used to being tested. As a talented salesperson and strong-willed woman in a male-dominated industry, she has to be prepared for whatever they throw at her. But losing her lover to her good friend and client is the one thing she never expected—and her walls start coming down. The pain cuts her deep. And when everything starts falling apart, she feels like a spectacle, while everyone around watches her crumble.

Beck Gallagher is a master of pain. A painter and tattoo artist, he makes his living memorializing the heartache of others. Beck has his own deep-rooted agony to deal with. But when he meets a broken young woman, the pain he lives with takes on a whole new meaning, and might be the one thing to save Regina from her own, or send her spiraling over the edge.

I'm a roller skating, anime watching romance author that cusses sometimes. I write contemporary and romantic suspense in my little house in the suburbs with my husband and two kids. I can usually be found with a glass of wine in one hand and a bowl of snacks balancing in my lap – most likely goldfish crackers.

I think everyone has been on the verge of a nervous breakdown at least once, whether a cheating partner or problems at work – it happens to the best of us. It always helps to know that you aren't alone, and that sometimes the best things that happen to us come at our lowest moments.

It was cold as hell in the office the day I found out that Richard had been cheating on me, and with my best friend no less. I remember the temperature clearly because I had been wearing the ratty old cardigan that I kept draped over the office chair for just such occasions. It was big and boxy and ugly as sin, the kind of sweater that could only be worn at work when you didn’t give a crap what you looked like. A perfect sweater to be wearing when your world crashed down around your ears.

I didn’t think anything of it when my email popped up on the lower right corner of my computer screen. Cindy Cain’s name blinked a new message box, and I mouse clicked on it naturally, without even pausing. Cindy was a close friend, and we emailed throughout the day randomly most days. Jokes, gossip, and memes we found on the internet. It may have seemed like a waste of time to some people, but when you worked in the industry I did, you took those distractions where you could.

I told people I worked in wholesale sales, that I sold party supplies. In reality, it was the sex toy and adult novelty industry. I sold fake dicks and sexy party tricks.

Not like on a street corner or anything, but my company was the giant wholesaler in the industry. We sold to adult stores and over eighteen party stores and there was a lot of money in it. Everything above board and legal, if not a little embarrassing to put on a business card. It might have been difficult to introduce myself by my profession, but I wasn’t above selling sex toys and bondage kits to make a living.

There was a shit ton of profit margin in glass dicks. Who knew?

I met Cindy at an industry tradeshow in Cleveland, she had come into my booth to ask about our raunchy greeting card display and the possibility of carrying a line of it in one or more of her four stores. I was glad to not have to talk about vibrators for five seconds and gladly engaged her in conversation. I found out her business was located about twenty miles away from my corporate office and the rest, as they say, was history.

Two women working in an industry predominantly run by males, which was about all we had in common. She was 40, so about five years older than me, with a loud voice and a tendency to tell dirty jokes and use excessive cuss words in everyday conversation. She wore tops cut low and heels stacked high and she knew everyone in the business. She was a boss lady and she took shit from no one.

I was a mousy haired thirty-something who didn’t like to make waves, who wore oversized sweaters and kept a space heater under my desk. I wore sensible shoes and had a snack drawer that looked like a ten-year-old’s pillowcase at the end of Halloween night. What helped me, in my line of work, was that I had the voice of a sex phone operator and people liked listening to me talk on the phone. Pair that with an extensive knowledge of our business catalog and solid sales background, and I was a key sales leader at my company. I just wasn't popular in the way that some other women were.

Cindy didn’t care about any of those things, so we had a pretty good relationship. She was one of my top customers, and I took care of her. That was our professional life. In our personal life we hung out on occasion, she had been to my house for dinner and we had girls nights out every couple of months. When I introduced her to my boyfriend a year prior she hired Richard to be her store manager. We weren’t the very best of friends, but we were close. Hell, she’d been inside my home.

And apparently, my boyfriend of four years had been inside of her.