You are here: Products The Perfect Catch by JOANNE ROCK 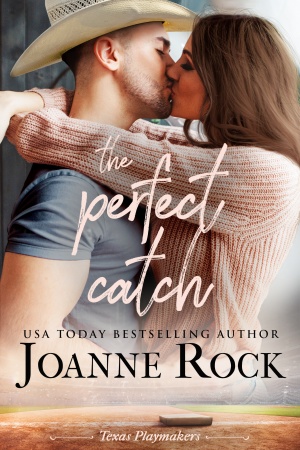 The Perfect Catch by JOANNE ROCK

He didn’t think coming home would mean falling in love

Outfielder Calvin Ramsey returns to his Texas farm home after being released from his team, an unexpected surprise sure to tarnish the family baseball legacy. But when he finds a sexy stranger acting as the temporary caretaker for his childhood home, all thoughts of baseball disappear.

She won’t fall for another player

After losing her savings to a swindler ex-boyfriend, Josie Vance moves to Last Stand to start fresh where no one knows her unhappy past or the con that bankrupted her. But her peaceful healing time evaporates when the homeowner’s son arrives and throws himself into life on the farm—and charming Josie. She can’t risk an affair that draws attention to her or her past. Especially not when the public’s fascination with the baseball-playing Ramsey clan is at an all-time high. Can she keep her secrets, her low profile, and her heart too?

Joanne Rock is a USA Today bestselling author. She's written over one hundred books, most recently focusing on sexy contemporaries and small-town family sagas. She enjoys romance for prioritizing relationships and encouraging readers to follow their dreams. A frequent speaker at regional and national writing conferences she enjoys giving back to the writing community that nurtured and inspired her early career. She has a Masters degree in Literature from the University of Louisville. When she's not writing, Joanne enjoys travel to gather new ideas.

The Texas Playmakers series was inspired by a research trip to Fredericksburg, Texas with other author friends who set books in the fictional town of Last Stand, Texas.

“I don’t know what you’re talking about.” Josie looked right into his eyes and lied to him.
Even if he hadn’t overheard her asking the store clerk about his situation with the Atlanta Rebels, Cal would have recognized the falsehood because of the way she rushed the words out of her mouth.
“You’re a terrible liar,” he informed her, fuming mostly with himself for bringing her with him today, for driving her here in his convertible that looked more at home in the team parking lot than in Cal’s small Texas hometown.
Was it any wonder they’d drawn stares?
Not that it even mattered she knew about his career or that he’d been cut by the team. Big deal. He’d known she’d hear about it eventually, but he’d been enjoying the anonymity of being with her. Of being a regular guy.
“You’re right.” She caved quickly enough, the humidity of the greenhouse already pulling dark curls from the braid where she’d tried to tame her hair. “I do know what you’re talking about, but you’re wrong about me breaking the truce, since I didn’t ask you a single question today.”
She had the audacity to look self-righteous about that. It might have had something to do with the way she pressed her lips together.
He debated kissing the expression away. Slowly. He could see the way the pulse at the base of her throat throbbed, her nerves all too obvious. Because of him and the thread of attraction that connected them? Or because she didn’t want to reveal anything about herself? He guessed he’d better press his advantage now and work on that kiss later.
A disappointing decision, he acknowledged. Especially when the humidity of the greenhouse intensified the hint of fragrance emanating off her skin.