You are here: Products The Obsession by Liliana Lee 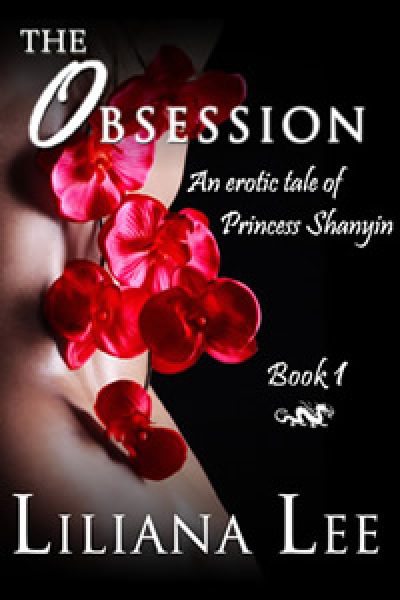 The Obsession by Liliana Lee

She thinks she’s in control…but he’s about to prove to the haughty princess that she is the plaything.

Princess Shanyin has a harem of male concubines to serve her every sexual fantasy, but from the moment she sees the handsome Chu Yuan, she has to have him. At her request, the Emperor gives the aristocrat over to Shanyin for her pleasure, setting off a power play of sensual torment and dominance between them. Trapped in Shanyin’s harem for ten days, will the proud Yuan surrender to his own dark desires, or will he turn the tables on the seductive princess?

Prologue
History will not remember me kindly, nor do I want it to. The book of our dynasty will say many things about me: that I was cruel, that I was decadent and depraved. They will claim that my pleasures were perverse in nature. Let me tell you that these things are all true…and not true…
***
It is hard for me to say exactly what I found so arousing about Yuan. From the very first moment I saw him, I wanted him in every way, more than any lover before or since. He was standing in a sea of bureaucrats and retainers assembled before the Emperor, though it was he alone who caught my eye.
Yuan was buried among the midlevel officials, yet he stood so tall and proud that it was impossible not to notice. He was young for such a position as well, perhaps only a few years older than myself. Fire shot through my veins at my first glimpse of him. As he watched the proceedings in the imperial hall, I detected a hint of defiance in the set of his jaw. His eyes were black and hard and my sex flooded when he glanced in my direction.
I leaned forward in my seat to address the Emperor on his throne. “Who is that?”
Several pairs of eyes fixed onto me from down below. I was one of the few in the empire allowed to address his Imperial Majesty so directly. The ministers of the court feared and hated me for that alone, imagining how I must whisper political schemes into his ear. But the Emperor was my younger brother and the things we said to each other were usually for our own amusement.
This time, Ziye actually looked impatient at my interruption. He took the throne when he was only sixteen years old after our father passed away. He was seventeen now.
“Who?” he asked me.
I gave a quick gesture with my hand. My brother knew immediately who I was interested in. And why.
“Lord Chu Yuan,” he answered with a smirk. “You’re shameless, Elder Sister.”
Our conversation held up the entire court. Ziye turned his attention back to the elder official standing at the foot of the dais and I did as well. I had little interest in affairs of government, but when Ziye summoned me, I could hardly refuse.
The gray-haired bureaucrat was reading from a long sheet of paper.
“Continue,” Ziye commanded.
As the official read, his voice began to tremble. I tried to recall the details of the situation. My brother had called this man to the front to read from a letter one of the imperial eunuchs had intercepted. I listened with a touch more interest—oh, the letter mentioned Ziye and it was not very flattering. The assembly grew deathly quiet.
My attention wandered once more to the handsome Yuan. For a moment, his gaze rose to the throne and my heartbeat ran wild. Such fire in that look! I couldn’t wait to get him alone.
“So you question my ability to rule,” my brother was saying.
His voice rang to the very back of the audience hall. Tension rippled throughout the assembly when he stood. “Does anyone else agree?”
Of course no one did. Most lowered their heads in supplication, afraid to meet the glittering eyes of this boy who was barely a man. Ziye had only been on the throne for a year, but his courtiers had learned quickly. Even I held my breath as he descended the dais.
The official prostrated himself, pressing his forehead to the hard floor. He rambled an apology: this humble servant was mistaken, he was sorry, he was worthless.
“Tell me Minister He, who do you think should be on this throne instead?”
The official was given no chance to reply. Ziye’s foot shot out and the sickening crack against Minister He’s skull could be heard throughout the hall. My stomach lurched, but I froze. The entire assembly remained deathly still while Ziye kicked the old man again and again, as if the minister were no more than a dog.
“Who was this letter intended for?” he demanded.
My brother’s personal bodyguards gathered at the edge of the dais, but not to stop the brutal beating. They were ready should anyone try to interfere. I winced as Ziye’s foot snapped into the minister’s ribs.
“Imperial Majesty!”
Mine was the only voice in the hall and Ziye stopped immediately. I rose to my feet to descend the steps, but my knees were water. My chest constricted so tight I co hardly breathe.
Ziye’s face was so contorted with rage, I could barely recognize it. Yet his eyes glowed. His face was alight.
I glanced downward as I took his side. “Look, there’s blood on the Emperor’s shoe,” I complained.
Ziye followed my gaze. “Right,” he said after a pause. “We must keep up appearances.”
The offending minister was dragged away and the court adjourned immediately after. As the ranks filed, I sought another glimpse of Lord Chu Yuan. His jaw was clenched. His eyes were shuttered and unreadable and the tight fist in my chest slowly unfurled. The sick feeling in my belly faded to be replaced with a low, throbbing ache.
Outside in the courtyard, I sent one of my eunuchs to him while my pulse raced. Usually I would just issue an official summons and wait in my personal palace, but today I watched as my messenger approached.
Yuan shook his head with a harsh curl of his lip. The look of disdain on his face made my blood run so hot that it boiled in my veins. I swore by my very last breath that I would have him; I would have that strong body beneath me, undone and throbbing inside me. In every way under heaven.