You are here: Products The Ninth Ingredient by Leon Mauvais 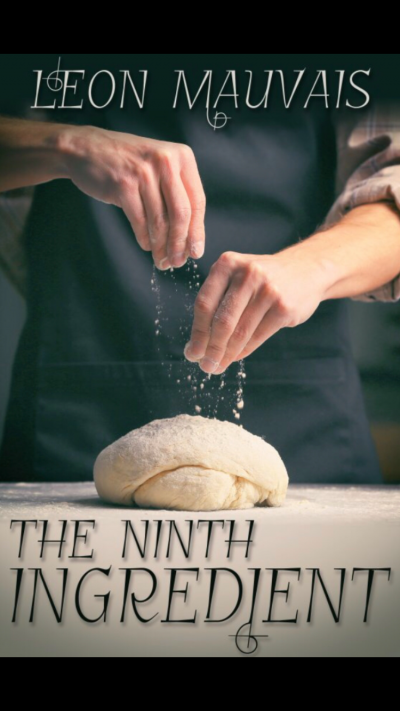 The Ninth Ingredient by Leon Mauvais

The Renaissance has invaded France! When a Medici princess lands with her army of Italian bakers, the royal kitchens of Fontainebleau erupt into chaos.

The Italians serve up something new, gelato, a dessert so fashionable, so chilled, it captures the tongues of the French court. The French bakers are left scrambling. Henri, a young apprentice, is tasked with discovering the secret recipe.

But when he falls for its maker, things heat up beyond the hearth. Is he willing to betray his new love for a list of ingredients? Espionage has never tasted sweeter!

Leon Mauvais is a beret-wearing sprite who fell asleep in the cornfields of Pennsylvania. He’s still there dreaming. He hopes his tales taste like taffy but help build crystallized armor, too. Once he lingered in the corners of the last used bookstores searching for forbidden adventures on exotic worlds.

It is based on a true-ish legend about how Gelato was introduced to France. Apparently the French chefs were so intimidated by the maker of the new delicacy, they bullied him back to Italy. The concept of artists bullying fellow artists really struck something within me and so, "The Ninth Ingredient" was baked.

Henri took a deep breath, hoping for a clarifying breath, but the adverse was inhaled. Dizzy, his leg dropped loose in the snow, but his fingers held tight. Breathless, he tried to sound bored. Each of his next words had to be planted with care. He couldn’t seem too interested in the Italian’s haul. Feigning anything other than passing curiosity would raise suspicion. Henri had come too far, to the very steps of heaven, for this.

“Cosimo, are you a merchant of snow?”

The Italian’s laugh seemed to rock the mountains, or at least shake Henri’s own insides. It anchored him to the ground, to the massive mounds of stone and ice. The longer he stayed up here, the more giggly he became, feeling the desire to be free of his furs and missions. If he stayed up here much longer, he knew he’d come clean. This close to the heavens, Henri felt the growing ecstasy of saints and madman. The air was too thin for clear thoughts, he surmised. And he didn’t have the time to adjust.

Henri stared up at him, biting the inside of his cheek fighting for a neutral expression. Henri obeyed. Surrendering to his private darkness. Yet even with his eyelids drawn, he could feel Cosimo boring through.

Henri waited. His pulse beat impatiently, marking the passing time. At first, it felt like nothing. Almost. Like the subtle change in air, heralding an approaching storm. His tiny nostrils flared, sensing something beneath, chilled. The hairs on his top lip sensing the presence before it arrived. Henri’s lips split as a frosty mound pushed through. It fell on his tongue, and he gasped. He could taste the tops of tiny turrets spun not of sugar, but ice. Too textured to have been ground down by a pestle. Too fragile to have been created by human hands. A granular more precious than rose-sugar or sand.

And what a fleeting moment of delight, for even as it touched the tip of his tongue, it began to dissolve. A fleeting dream kingdom, melting away, dissolving into a refreshing spring. His mouth filled with the new flavor. There was no metallic aftertaste of a pan. Or hint of kitchen smoke. Not weighed down with cream, nor gritty with sweet. No hint of stale rain, but something almost eternal. Like the heaven’s distilled. Up this high, Cosimo collected the sky.

He swallowed, the cool stream trickling down his throat. The first ingredient. The foundation of gelato. Henri understood. Of course the courtiers had been brought to tears, forgetting the weak vows uttered under crowns of gold. With the taste of clouds within, how could you not feel refreshed, restored. Ingredients gathered in Henri’s mind, pushing through his recipes. Syrups dripped and sauces curdled. Even honey drizzled over this snow, could be too much. Even a sprinkle of sugar may taint. He opened his eyes, his mouth hung open for more of the treasure.

Cosimo’s glove removed, his dark fingers coated in the snow like bridal lace. Waiting. Henri’s mouth closed around two of the Italian’s fingers. He suckled. Thirsty. The ascent had taken more out of him than he realized. Henri sat up grabbing at Cosimo’s wrist, pushing the man’s fingers deeper in, till they found the soft lining of his throat.

The wind snatched a low groan from Cosimo. The Italian, pushed his fingers deeper, adding more digits dipped in snow till Henri’s mouth was completely full.

A cry shattered the sky. Cosimo withdrew and pulled Henri to his feet. He searched the lip of the precipice. The scream had sounded too high to belong to a falling man. The cry came again. Henri watched as Cosimo extended his arm like a perch.

The scream had come not from a man, but beast. A creature descended from the sky, blotting out the sun. Henri ducked. Wings and a forehead of glacial blue, black war paint streaking down a feathered face. Intelligent eyes on either side of a beak glinting preternatural gold. A head crowned in a fiery red plume. The swoosh of its wings echoed as its claws delicately closed around Cosimo’s forearm buckled in leather. No French falconer commanded such powerful majesty. Henri couldn’t imagine the French skies wide enough to birth such a beast. Henri shuddered, watching Cosimo’s naked fingers stroke through the predator’s crest. The same fingers he’d just tasted, the same digits, he’d tried to swallow down, drawing the Italian to him.