You are here: Products The Mourning Doll by K. J. Kay 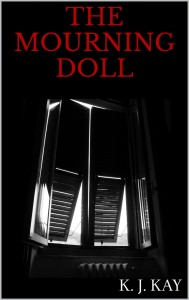 Set against the backdrop of Victorian England, The Mourning Doll tells the love story between Sir Lincoln Bartholomew Rinehart and the mysterious and haunting, Lady Delphinia and his intertwining political career.

As Lincoln is a man who has grown to become greatly dissatisfied with his life and despise the social class hierarchy in which he was born, he accepts an offer to join the newly formed political faction known as the Ashwoods and become the Minister of Gravesend but, he soon discovers that he is merely a pawn in a game played by powerful politicians.

Amidst this tumultuous political and social climate, Lincoln is torn between the expectations of his family and society to marry the beautiful Lady Madeline Montague, his loyalty toward the poorer working classes of Britain and his love for the mysterious Lady Delphinia who harbours a frightening secret.

Author who is passionate about writing and reading classic literature.

My love for classic literature and desire to creatively manifest the love that has escaped my reality, but I have dreamed of experiencing my entire life.

Though he had prepared for this moment for longer than his days upon the earth, he felt now that he would never be ready for it to come; wishing instead that he could stay forever in that place of expectation, afraid that it would not bring to life the dream he had been carrying within his soul and afraid of its passing, if it did come to bear. There was a faint hope within him that the torture of her memory would be eased, not aware that once he did have her, once she became his in name, in word, in feeling that another fear would replace the other: the fear of losing her. As long as she lived within this world, his tortured heart and tormented mind would never be free. He remarked upon this now, this love he felt for her when he had allowed it to rise from the hidden depths of his subconscious, all at once it released him and held him captive; but it was a prison that he walked into willingly, the kind that binds us to our fate, like an artist enslaved within his art; like the child within its mother’s womb, like the morning sound of nature heralding the dawn. There was a calm, and a rage; darkness and light; an endless harmony of sound, and an eternal silence; everything was moving, and yet, everything remained still; it was like seeing the celestial arc of a rainbow’s touch upon the sky but never reaching the end.

Be the first to review “The Mourning Doll by K. J. Kay” Cancel reply