You are here: Products The More the Merrier (A Menage Erotica Boxed Set) by Tara Crescent 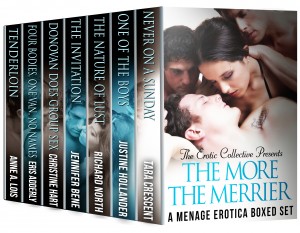 Join in and indulge in your secret longings, explore your hidden desires and experience pleasure, passion and lust in this boxed set collection of seven hot, smoking menage novellas.

Never on a Sunday by Tara Crescent – Stephanie Rice thinks she has her sex life all figured out. Six guys, six days of the week, with a rest on Sunday. Easy, organized and perfect. Except this week, all six men have conspired to give Stephanie a Sunday surprise she’s never going to forget.

One of the Boys by Justine Hollander – Long buried flames burn bright when four old friends reunite for a weekend of secrets revealed and passions ignited.

The Nature of Lust by Richard North – Dan comes to the aid of a spiritual beauty and her mystical companion.

The Invitation by Jennifer Bene – Cara has spent her entire life as the good girl – the straight-A, straight-laced, good girl – and she’s tired of it. When her roommate invites her to an exclusive party Cara discovers a hidden world where society’s rules hold no sway, and participation could mean another invitation.

Donovan Does Group Sex by Christine Hart – DONOVAN DOES GROUP SEX is another chapter from THE PRINCE OF DARKNESS VS. THE PROM QUEEN and follows Donovan, Laci, their friends and stuffed unicorns who stay true to character and do group sex a little differently.

Four Bodies, One Van, No Names by Eris Adderly – Two girls, two guys, and a little quid pro quo: the women are ready to put on a show, but are the men be willing to pay their price?

Tenderloin by Anne A. Lois – In celebration of Jasper’s birthday, Cait becomes the Dinner Special and is thoroughly enjoyed between him and his friends.

(This is from Never on a Sunday by Tara Crescent)
My name is Stephanie Rice. I’m twenty six. I have shoulder-length black hair and brown eyes. I’m five feet five inches tall, and I weigh a hundred and ten pounds. If you ask me if I am a cat or dog person, my reply would be both. I drink coffee, not tea. Chocolate is a food group. I’ve never walked past a cookie I didn’t want.
I’m a badly paid marketing coordinator who lives in Brooklyn in a cunningly divided studio apartment that I share with a college friend, Sasha. Our apartment has no kitchen, just a tiny refrigerator, a microwave and a sink. Once I’ve paid the outrageous sum of money that our landlord demands for rent, I have four hundred dollars a month left over for food, a subway pass, and everything else. I therefore live on Ramen noodles and hope for a raise.
Oh, and I’m a self-diagnosed sex addict.
Right now, I’m fucking six different men. I’m quite organized about my sex life. Each man fills a different niche, and I’ve assigned each of these men a day of the week.
Monday is the Chef. Tuesday, the Technician. Wednesday, I fuck the Playboy. Thursday, Mr. Buttman has his way with me. Friday, I meet the Doctor. And Saturday? Saturday is my time with the Dominant.
Sunday, I do laundry. A girl does need clean underwear, after all.
***
After work Monday evening, I make my way to Chinatown, to the fifth floor walk-up that is the relatively spacious apartment of the Chef.
The Chef’s name is Mark, and he isn’t really a chef, though unlike me, he can actually cook. He’s some kind of middle manager for a biotech company. I call him the Chef because he likes to play with food. Last Monday, he rubbed cinnamon oil on my nipples, my pussy lips and around the tight ring of my asshole, and he watched me wriggle as the heat from the oil warmed my entire body. He had me begging and pleading and when he finally bent me over his desk and fucked me, I came in an explosion of scalding pleasure.
I wonder what the Chef has in store for me today.