You are here: Products The Miracle of Yousef by Goncalo Coelho 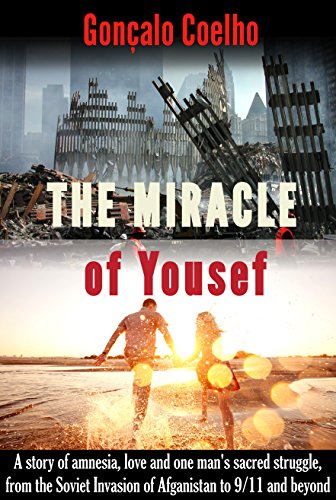 The Miracle of Yousef by Goncalo Coelho

A man washes up more dead than alive on the shores of a sun-dazzled Aegean Isle. His memory has been wiped absolutely clean. Who is he? Where is he from? A battered man with no past, a survivor.

In a heavenly awakening he meets the lovely and beguiling Nefise, and instantly falls hopelessly in love. Through a series of idyllic and tumultuous encounters on the shores of this Turkish island the two grope towards the threshold of a new life together… until suddenly one bright morning hell opens up beneath them.

Meet Yousef Al-Khaled, a lover, a man of profound tenderness, sensitivity and passion … and the world’s most wanted terrorist.

In a kaleidoscopic odyssey through the darkest moments of our era, from bomb-smashed caves in the Afghan mountains to the hot streets of Jeddah, from London’s glitter to the sorrows of New York, from frenzied Balkan escapes to the wild labyrinth of Istanbul’s Grand Bazaar and a desperate standoff beneath the murky waters of the Bosporus, Yousef races unstoppably towards his fate – until it seizes him once and for all.

A thriller entwined in a spiritual journey, historical novel, and all-encompassing love story, this is the tragic tale of a great sinner, “the happiest man in the world,” in a pilgrimage beyond fundamentalist violence and hatred to discover another Islam, the Islam we seldom if ever hear about.

Gonçalo Coelho was born in Oeiras, Portugal in 1978. He lived in the cities of Lisbon and Oporto in Portugal, Brighton in the UK and São Bento do Sul in Brazil. Currently he resides in Berlin, the German capital. These experiences fill in his literary space characterized by cultural diversity and a willingness to provide readers with different perspectives and facets of the world we live in. He graduated with the degree of Master of Mechanical Engineering from the University of Sussex in 2000 but remained forever faithful to his passion for literature. In 2008 he published his first novel entitled Poker. He has published short stories and several articles for the Portuguese press. The Miracle of Yousef is his second novel and the first yet to be translated to English.

PROLOGUE
March 2002
An island somewhere in the Mediterranean
When the mysterious shipwreck survivor awoke, he breathed in air that was mild and damp. The first thing his eyes took in was the magnificent blue immensity of the sky, enhanced by the sound of the waves on the shore, a perfect alchemy to allay the aches of mind and body. In the heart of this idyllic universe a woman’s voice emerged, as harmonious as the song of sparrows on a sunny spring morning.
“Merhaba! Welcome back to the land of the living!”
The survivor gave no reply or any sign of having heard these words spoken in a melody and language he did not recognize. In his mind it must not have sounded so different from the murmur of the sea embracing the sandy beach with small foaming waves. He took in only the wonder of it all, like someone hearing a symphony without distinguishing any particular instrument. His soul was in the purest and lightest state that it is given to men to experience. As pure and light as though he had been allowed to experience with the mind of an adult what it is to be born into this world. At that moment, in his world, there was neither past nor future. There was no notion of time, or fear, or guilt or ambition. He was completely unaware that at that precise moment he was being avidly hunted down. All of that had dissolved in his memory like sugar in water that has been vigorously stirred. If, at that moment, he had been capable of grasping through reason the notion of birth itself, surely he would have thought that this was exactly what he was: a new-born child.
As his eyes adjusted to the light, discerning the various shapes around him, the survivor gazed at each object with growing curiosity, as though he were seeing everything for the first time. Another way to classify his condition would be to say that he was in the clinical state of a perfect idiot. Indeed, this was precisely his demeanor. His apparent idiocy, however, gave rise both to an enormous curiosity regarding everything around him, as well as, in the same measure, an immense delight in simply being and feeling, with the unbounded tranquility of people who are very happy. He felt this pleasure in gazing at the sky and feeling himself mingling with the clouds in the midst of the blue vastness, and flying among them, as though his soul were bound to something far greater than himself. At the same time, the girl at his side – the first human being upon whom he set his eyes after this rebirth – was also imprinted forever in his soul as a divine creature. The recollection of this powerful state of the spirit was never to leave him, and would change his existence forever. Right then and there he was born into a new life.