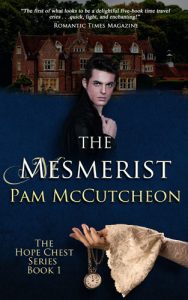 An antique hope chest containing five unique objects . . . five people inexorably drawn to the items inside . . . each sent to the past where they must accomplish a task and find their own path to true love with the help of a magical matchmaker determined to bring soul mates together, even across time.

On the eve of her wedding, dog trainer Gina Charles finds her fiancé in flagrante delicto with her maid of dishonor, so she flees to a hotel in a nearby town. Unfortunately, her room already has another occupant—a ghost with compelling dark eyes who cuddles up to her in the middle of the night.

Gina reluctantly agrees to help the ghostly mesmerist, Drake Manton, learn how he died. When her investigation leads her to the burned-out Chesterfield hotel, Gina finds a hope chest in the ruins and is drawn to the melted dueling pistol inside. When she touches it, she and her faithful terrier hurtle back in time to 1883 where she comes face-to-face with the very alive, very sexy mesmerist.

Now all Gina has to do is prevent Drake’s fiery death so she can return to her own time. Or will she give up her life in the future for a lifetime of love in Drake’s arms?

After many years of working for the military as enlisted, officer and civil service successively, she left her industrial engineering position to pursue her first love—a career in publishing. She can be found in beautiful Colorado Springs with her rescue dogs or on the Internet.

One of the first scenes of this book came about when I roomed with author, Trana Mae Simmons at a writers conference in New York. One morning, I felt someone kneel on the bed and cuddle up to me spoon-fashion. It startled me into leaping out of bed, but when I did, there was no one there. That’s when Trana informed me she was a ghost hunter, and that one of her transparent friends had taken a shine to me. Well, naturally I had to use that experience in a book and it shows up in the second scene of this book, when ghostly Drake cuddles up to Gina in the middle of the night.